The Sunga Empire (or Shunga Empire) is a Magadha dynasty that controlled North-central and Eastern India as well as parts of the northwest (now Pakistan) from around 185 to 73 B.C.E. It was established after the fall of the Indian Mauryan empire. The capital of the Sungas was Pataliputra. Later kings such as Bhagabhadra also held court at Vidisa, modern Besnagar in Eastern Malwa. The Sunga Empire is noted for its numerous wars with both foreign and indigenous powers although several kings patronized Buddhism. The Mathura school of art and the works of Patanjali colored North India during this empire. It was replaced by the Kanva dynasty.

The beginning of larger, centralized polities in India was largely in response to Alexander the Great's invasion of 326. Following the Mauryan Empire, the task of protecting India from invasion and of securing stable governance fell to the Sunga dynasty for the next century. War is said to have characterized this period although the Sungas also engaged in diplomacy. Significant religious developments took place. Patanjali's synthesis of the tradition of Yoga became the foundation of one of the Hindu "darshans" (schools of thought) and continues to enrich the lives of people all over the world. The Bhagavad Gita composed around about 150-100 B.C.E. is one of the most popular of all Hindu scriptures. Buddhists would later move out of India, as rulers began to identify more closely with Hinduism but early Sunga support may have enabled Buddhism to thrive long enough for the monks to complete their journey to more receptive areas. The Sunga Empire played an important role in patronizing Indian culture at a time when some of the most important developments in Hindu thought were taking place. The richness of India's spiritual tradition, from which the whole world has gained insight, owes much to this period.

The Sunga dynasty was established in 185 B.C.E., about 50 years after Ashoka's death, when the king Brhadrata, the last of the Mauryan rulers, was assassinated by the then commander-in-chief of the Mauryan armed forces, Pusyamitra Sunga ("Pusyamitra is said in the Puranas to have been the senānī or army-commander of the last Maurya king Brhadratha")[1] while he was taking the Guard of Honor of his forces. Pusyamitra Sunga then ascended the throne.

Pushyamitra Sunga became the ruler of the Magadha and neighboring territories. The kingdom of Pushyamitra was extended up to Narmada in the south, and controlled Jalandhar and Sialkot in the Punjab in the north-western regions, and the city of Ujjain in central India. The Kabul Valley and much of the Punjab passed into the hands of the Indo-Greeks and the Deccan to the Satavahanas.

Pushyamitra died after ruling for 36 years (187-151 B.C.E.). He was succeeded by son Agnimitra. This prince is the hero of a famous drama by one of India's greatest playwrights, Kalidasa. Agnimitra was viceroy of Vidisha when the story takes place. The power of the Sungas gradually weakened. It is said that there were ten Sunga kings.

The Sungas were succeeded by the Kanva dynasty around 73 B.C.E. 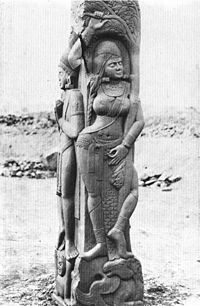 Following the Mauryans, the first Brahmin king was Pusyamitra Sunga, who is frequently linked in tradition with the persecution of Buddhists and a resurgence of Brahmanism that forced Buddhism outwards to Kashmir, Gandhara, and Bactria. However, there is doubt as to whether he did persecute Buddhists actively. According to the second century Ashokavadana:

Then King Pusyamitra equipped a fourfold army, and intending to destroy the Buddhist religion, he went to the Kukkutarama. (…) Pusyamitra therefore destroyed the sangharama, killed the monks there, and departed. After some time, he arrived in Sakala, and proclaimed that he would give a hundred dinara reward to whomever brought him the head of a Buddhist monk" (Shramanas) Ashokavadana.[2]

Later Sunga kings were seen as amenable to Buddhism and as having contributed to the building of the stupa at Bharhut.[3]

Brahmanism competed in both the political and spiritual spheres with Buddhism in the gangetic plains. Buddhism flourished in the realms of the Bactrian kings.[4] Buddhism, with no priests or classes, attracted a large lay following, while Brahmanism privileged the priestly class and offered little for non-Brahmans by way of a spiritual life. Patanjali also represented an alternative, teaching Yoga and devotion that anyone could practice, regardless of class or caste. Some date Bhagavata Gita from this period, which became the favorite text of the Bhakti tradition. It also challenges an elitist religion.

Runion says that the Sunga spread Hinduism into Afghanistan, however, where they "eliminated Buddhism."[5] However, the Gita is also tolerant of religious diversity, regarding different paths and names for God as alternatives that lead to the same goal. There is only one Ultimate Reality but this reality manifests in a plurality of ways, each revealing different aspects or qualities of the same Reality. War and conflict characterized the Sunga period. They are known to have warred with the Kalingas, Satavahanas, the Indo-Greeks, and possibly the Panchalas and Mathuras.

The Sunga Empire's wars with the Indo-Greek Kingdom figure greatly in the history of this period. From around 180 B.C.E. the Greco-Bactrian ruler Demetrius, conquered the Kabul Valley and is theorized to have advanced into the trans-Indus. The Indo Greek Menander is credited with either joining or leading a campaign to Pataliputra with other Indian Kings; however, very little is know about the exact nature and success of the campaign. The net result of these wars remains uncertain.

Some interpretations of the Mahabharata and Yuga Purana have attempted to account for this:

The Anushasanaparava of the Mahabharata affirms that the city of Mathura was under the joint control of the Yavanas and the Kambojas.[7]

Also the Hindu text of the Yuga Purana, which describes Indian historical events in the form of a prophecy,[8] relates the attack of the Indo-Greeks on the capital Pataliputra, a magnificent fortified city with 570 towers and 64 gates according to Megasthenes,"The greatest city in India is that which is called Palimbothra, in the dominions of the Prasians […] Megasthenes informs us that this city stretched in the inhabited quarters to an extreme length on each side of eighty stadia, and that its breadth was fifteen stadia, and that a ditch encompassed it all round, which was six hundred feet in breadth and thirty cubits in depth, and that the wall was crowned with 570 towers and had four-and-sixty gates."[9] Megasthenes describes the ultimate destruction of the city's walls:

Then, after having approached Saketa together with the Panchalas and the Mathuras, the Yavanas, valiant in battle, will reach Kusumadhvaja ("The town of the flower-standard," Pataliputra). Then, once Puspapura (another name of Pataliputra) has been reached and its celebrated mud[-walls] cast down, all the realm will be in disorder.[10]

Pushyamitra is recorded to have performed two Ashvamedha Yagnas and Sunga imperial inscriptions have extended as far as Jalandhar. Scriptures such as the Divyavadhana note that his rule extended even farther to Sialkot, in the Punjab. Moreover, if it was lost, Mathura was regained by the Sungas around 100 B.C.E. (or by other indigenous rulers: The Arjunayanas (area of Mathura) and Yaudheyas mention military victories on their coins ("Victory of the Arjunayanas," "Victory of the Yaudheyas"), and during the first century B.C.E., the Trigartas, Audumbaras and finally the Kunindas also started to mint their own coins). Accounts of battles between the Greeks and the Sunga in Northwestern India are also found in the Mālavikāgnimitram, a play by Kālidāsa which describes a battle between Greek cavalrymen and Vasumitra, the grandson of Pushyamitra, on the Indus river, in which the Indians defeated the Greeks and Pushyamitra successfully completed the Ashvamedha Yagna.[11]

Nevertheless, very little can be said with great certainty. However, what does appear clear is that the two realms appeared to have established normalized diplomatic relations in the succeeding reigns of their respective rulers.

The Indo-Greeks and the Sungas seem to have reconciled and exchanged diplomatic missions around 110 B.C.E., as indicated by the Heliodorus pillar, which records the dispatch of a Greek ambassador named Heliodorus, from the court of the Indo-Greek king Antialcidas, to the court of the Sunga king Bhagabhadra at the site of Vidisha in central India. 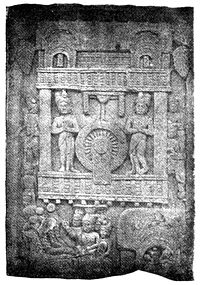 A relief from Bharhut.

While there is much debate on the religious policies of the Sunga dynasty, it is recognized for a number of contributions. Art, education, philosophy, and other learning flowered during this period. Most notably, Patanjali's Yoga Sutras and Mahabhasya were composed in this period. It is also noted for its subsequent mention in the Malavikaagnimitra. This work was composed by Kalidasa in the later Gupta period, and romanticized the love of Malavika and King Agnimitra, with a background of court intrigue.[12]

Artistry on the subcontinent also progressed with the rise of the Mathura school, which is considered the indigenous counterpart to the more Hellenistic Gandhara school of Afghanistan and Pakistan.

During the historical Sunga period (185 to 73 B.C.E.), Buddhist activity also managed to survive somewhat in central India (Madhya Pradesh) as suggested by some architectural expansions undertaken at the stupas of Sanchi and Barhut, originally started under King Ashoka. It remains uncertain whether these works were due to the weakness of the control of the Sungas in these areas, or a sign of tolerance on their part.

The last of the Sunga kings was Devabhuti (83-73 B.C.E.). He was assassinated by his minister (Vasudeva Kanva) and is said to have been over fond of the company of women. The Sunga dynasty was then replaced by the subsequent Kanvas.

The script used by the Sunga was a variant of Brahmi, and was used to write the Sanskrit language. The script is thought to be an intermediary between the Maurya and the Kalinga brahmi scripts.[13]

The Sunga Empire played an important role in patronizing Indian culture at a time when some of the most important developments in Hindu thought were taking place. The richness of India's spiritual tradition, from which the whole world has gained insight, owes much to this period. The Sunga rulers helped to establish the tradition of royal sponsorship of learning and art that would be continued by later dynasties, ensuring that Indian culture remained vital and creative.

Retrieved from https://www.newworldencyclopedia.org/p/index.php?title=Sunga_Empire&oldid=1030324
Categories:
Hidden category:
This page was last edited on 6 January 2020, at 03:33.
Content is available under Creative Commons Attribution/Share-Alike License; additional terms may apply. See Terms of Use for details.