Chandragupta II (referred to as Vikramaditya or Chandragupta Vikramaditya) stands as one of the most powerful emperors of the Gupta empire. His rule spanned from 375 to 415 C.E. when the Gupta empire achieved its zenith, often referred to as the Golden Age of India. Chandragupta had been the son of the ruler Samudragupta. He attained success by pursuing both favorable military alliances and an aggressive expansionist policy. In that both his father and grandfather set the precedent.

In addition to military prowess, Chandragupta II elevated culture, art, mathematics, philosophy, religion, and astronomy during his reign. He sponsored a circle of poets known as the Nine Gems, foremost among them the renowned Kalidasa. In astronomy and mathematics, Varahamihira stood at the forefront. In art, the relief panels on the Dashavatara Temple in Deogarh provide an example of the heights reached by Gupta artists. In the area of religion, Chandragupta II supported Buddhism during the time of Buddhism's ascendancy in northern India, as well as Hinduism and Jainism.

Few personal details have been recorded of the great king. His mother, Datta Devi, had been the chief queen of Samudragupta. The most widely accepted details have been built upon the plot of the play 'Devi-Chandraguptam' of Vishakadatta. The play has been lost with only fragments preserved in other works (Abhinava-bharati, Sringara-prakasha, Natya-darpana, Nataka-lakshana Ratna-kosha). An Arabic work Mujmalu-t-Tawarikh, using a corruption of the name Vikramaditya, tells a similar tale of a king.

Silver coin of Chandragupta II, minted in his Western territories, in the style of the Western Satraps.
Obv: Bust of king".[1]
Rev: "Chandragupta Vikramaditya, King of Kings, and a devotee of Vishnu" in Brahmi, around a peacock.
15mm, 2.1 grams. Mitchiner 4821-4823.

The fragment from Natya-darpana mentions the king Ramagupta, the elder brother of Chandragupta, surrendering his queen Dhruvaswamini to the Saka king of the Western Kshatrapas Rudrasimha III, after a defeat at the Saka king's hands. To avoid the ignominy the Guptas decided to send Madhavasena, a courtesan and a beloved of Chandragupta, disguised as the queen. Chandragupta changed the plan and himself went to the Saka King disguised as the queen. He then kills Rudrasimha and later his own brother, Ramagupta. Dhruvaswamini then marries Chandragupta.

Although Vishakadatta may have taken liberties took with the incidents, Dhruvadevi indeed had been the king's chief queen as seen in the Vaisali terracotta seal that calls her ‘Mahadevi’ Dhruvasvamini. The Bilsad pillar inscription of their son Kumara Gupta I also refers to her as Mahadevi Dhruvadevi. Inscriptions on Jain figures in the District Archaeological Museum, and some copper coins found at Vidisha, mention a Ramagupta. The king and Dhruvadevi constitute the protagonists of Vishakadatta's play indicating that the playwright had given little, if any, significance to marrying his widowed sister-in-law. Later Hindus viewed such a marriage as morally distasteful, censure of the act appearing in the Sanjan copperplate inscription of Amoghavarsha I and in the Sangali and Cambay plates of the Rashtrakuta king Govinda IV.

Faxian (Fa-shien) had been the first of three great Chinese pilgrims who visited India from the fifth to the seventh centuries C.E. in search of knowledge, manuscripts and relics. He arrived during the reign of Chandragupta II and gave a general description of North India at that time. Among other things, he reported the absence of capital punishment, the lack of a poll-tax and land tax, and the presence of a strongly embedded caste system. Most citizens abstained from onions, garlic, meat and wine. The Chandalas proved the exception, earning the displeasure of other peoples and finding themselves segregated in mixed society.

Culturally the reign of Chandragupta II marked a Golden Age as well. Later reports of the presence of a circle of poets known as the Nine Gems in his court give evidence of that. Kalidasa stood as the greatest among them. He authored numerous immortal pieces of literature, including The Recognition of Shakuntala, earning the title of the Shakespeare of India.[3] Varahamihira, a famous astronomer and mathematician, had been another.[4]

Padwa or Varshapratipada, which marks the coronation of King Vikramaditya, follows the day after the Hindu festival Diwali. The Hindu Shaka-Samvat calendar apparently started on that day, celebrated as New Year's day in some places. That leads to confusion since the Vikram-Samvat synchronizes with the Vikram-Samvat calendar, starting around April, in parts of India.

Fourth century C.E. Sanskrit poet Kalidasa, credits Chandragupta Vikramaditya (Raghu) with having conquered about twenty one kingdoms, both in and outside India. After finishing his campaign in the East, South and West India, Raghu (aka Vikramaditya, Chandragupta II) proceeded northwards, subjugated the Parasikas (Persians), then the Hunas and the Kambojas tribes located in the west and east Oxus valleys respectively. Thereafter, the victorious king proceeded across the Himalayas, reducing the Kinnaras, Kiratas and lands into India proper.

According to the Brihat-Katha-Manjari of the Kashmiri Pandit Kshmendra, king Vikramaditya (Chandragupta II) had "unburdened the sacred earth of the Barbarians like the Shakas, Mlecchas, Kambojas, Yavanas, Tusharas, Parasikas, Hunas, etc. by annihilating these sinful Mlecchas completely." 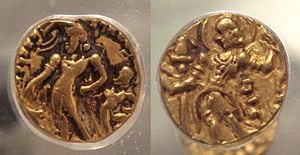 His greatest victory had been over the Shaka-Kshatrapa dynasty and annexation of their kingdom in Gujarat, by defeating their last ruler Rudrasimha III. His son-in-law Rudrasena II died fortuitously after a brief reign in 390 C.E., following which Prabhavatigupta ruled as a regent on behalf of her two sons. During that twenty year period, the Vakataka realm practically became a part of the Gupta empire. The geographical location of the Vakataka kingdom allowed Chandragupta to take the opportunity to defeat the Western Kshatrapas conclusively. Historians typically refer to that period as the Vakataka-Gupta age.

Chandragupta II controlled a vast empire, from the mouth of the Ganges to the mouth of the Indus River and from today's North Pakistan south to the mouth of the Narmada. Pataliputra continued to serve as the capital of his expansive empire but Ujjain found itself relegated to a second capital status. The abundant beautiful gold coins issued by the Gupta dynasty testify to the imperial grandeur of that age. Chandragupta II also introduced production of silver coins in the Shaka tradition.

Close to the Qutub Minar stands one of Delhi's most curious structures, an iron pillar, dating back to fourth century C.E. The pillar bears an inscription declaring that the artisans created it to serve as a flagstaff in honor of the Hindu god Vishnu, and in the memory of Chandragupta II. The pillar also highlights ancient India's achievements in metallurgy. The pillar, created with 98 percent wrought iron, has stood more than 1,600 years without rusting or decomposing. That iron pillar bares similarity to the Pillars of Ashoka found mostly in northern India. From Chandragupta II, kings bore the title Parama Bhagavatas, or Bhagavata Vaishnavas. The Bhagavata Purana entails the fully developed tenets and philosophy of the Bhagavata sect whereas Krishna fused with Vasudeva, transcending Vedic Vishnu and cosmic Hari turning into the ultimate object of bhakti.[5]

Retrieved from https://www.newworldencyclopedia.org/p/index.php?title=Chandragupta_II&oldid=1002918
Categories:
Hidden category:
This page was last edited on 25 January 2017, at 21:44.
Content is available under Creative Commons Attribution/Share-Alike License; additional terms may apply. See Terms of Use for details.