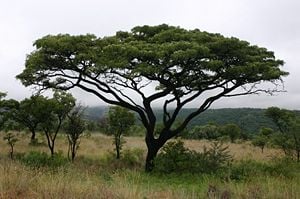 The nation of Benin is a sliver of a country in West Africa, the shape of which has been compared to a flaming torch. It encompasses 43,484 sqare miles (112,622 sq km), comparable to the U.S. state of Pennsylvania. Its two National Parks lie near its northern borders.

The Pendjari National Park borders Burkina Faso, while the W National Park extends into that country as well as into Niger. These two parks are part of the largest group of protected areas in West Africa, the complex of Park W-Arli-Pendjari, which straddles the borders of Niger, Benin and Burkina Faso. This complex covers a total area of 19,305 square miles (50,000 sq km), of which 4,633 sq mi (12,000 sq km) is in Benin. This is the second largest protected ecosystem in West Africa; only the Comoe National Park in Ivory Coast is comparable in size.

The area these parks lie in is considered one of the most important humid ecosystems, with extensive biodiversity, in the sub-Sahelian area of West Africa. The area is characterized by gallery forests, savannah and swampy meadows, alluvial plains, ponds, rivers, and dense dry forests within floodplains. Animal life, including big game-animals, is abundant. Pendjari is especially known for its birdlife.

The establishment of the protected areas in Benin is a positive act of man fulfilling his responsibility for the protection of the natural world. 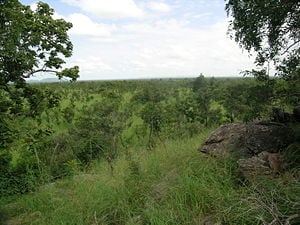 The Park lies in northwestern Benin, against the international frontier with Burkina Faso. It is part of the largest group of protected areas in West Africa, the complex of Park W-Arli-Pendjari. This complex straddles the borders of Niger, Benin and Burkina Faso. The Park W-Arli-Pendjari Complex covers a total area of 19,305 square miles (50,000 sq km), of which 4,633 sq mi (12,000 sq km) is in Benin. Pendjari National Park covers approximately one tenth of the complex (1930 sq mi or 5000 sq km).

Named for the Pendjari River, the national park is known for its wildlife, including monkeys, hippopotami, and a prominence of birds. There are also large stocks of game animals including elephants, lions, leopards, buffalo and various antelopes.

The quartzite cliffs of the Atacora Hills form the southeastern boundary of the park. The Pendjari River bounds the park on three sides and forms the international border with Burkina Faso along the park's northern edge. The hills and cliffs of the Atacora range make the northwest one the most scenic areas of Benin. They provide a wonderful backdrop to the Park, which, in its isolation, remains one of the most interesting in West Africa. The rocky cliffs of the area are sparsely wooded with Burkea africana, Detarium microcarpum, Lannea acida, Sterculia setigera and Combretum ghasalense. On the deep soils of some of the summits and the Atakora escarpment one finds a greater variety of plant species with Isoberlina doka and Afzelia africana. The Pendjari River has an impressive gallery forest. The park includes both Sudan and Northern Guinea savannas, with areas of grassland dominated by Acacia sieberiana and Mitragyna inermis or Terminalia macropter. 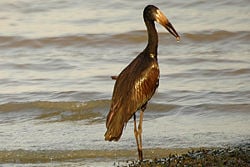 African Openbill Stork, a common sight in the Park. 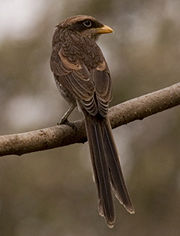 The Park is renowned for its abundance of birds with some 300 different species in total. Pallid Harrier (Circus macrourus) and Lesser Kestrel (Falco naumanni) are occasionally recorded and there are a few isolated records for Lappet-faced Vulture (Torgos tracheliotus). Fox Kestrel (Falco alopex) is not uncommon, while the African Swallow-tailed Kite (Chelictinia riocourii) is a not uncommon dry season visitor. The Booted Eagle (Hieraaetus pennatus) has also been recorded here. BirdLife notes that "the Pendjari is notable for large conspicuous species such as African Openbill Stork (Anastomus lamelligerus), Abdim's Stork (Ciconia abdimii), Saddle-billed Stork (Ephippiorhynchus senegalensis), and seasonally, flocks of up to 60 European White Stork (Ciconia ciconia). The African Fish Eagle (Haliaeetus vocifer) and Pel's Fishing-owl (Scotopelia peli) can also be found."

Grey Tit-flycatcher (Myioparus plumbeus) has been recorded as well as several other species of the undergrowth. White-throated Greenbul (Phyllastrephus albigularis) has been recorded at Tanguiéta and the White-throated Francolin (Francolinus albogularis), a rare resident, has been spotted in farmland south of Natitingou. South of the park there is a large semi-protected zone known in French as La zone cygnetique de la Pendjari where a number of other species have been spotted.

The W National Park (French: "W" du Niger) is a major national park in Niger around a meander in the Niger River shaped like a "W," hence its name. While the greatest area of the park is in Niger it also extends through the extreme northern section of Benin (1,938 sq mi or 5,020 sq km) and into Burkina Faso (733 sq mi or 1,901 sq km). The area was declared a faunal reserve and state forest in 1953 and designated a national park on August 4, 1954. In 1996 an 850 square mile section of the park lying within Niger, between Sudan and Guinea Savannas, was named a UNESCO World Heritage Site.

W National Park contains important areas of high biodiversity and significant natural habitats for threatened species. It is home to major populations of hoofed mammals (ungulates) and wild plant species, valuable to both conservation and genetic research. The wetland area of the Park is of international importance for the conservation of birds as a Ramsar site.[2]

The considerable hydrological resources found in W National Park has earned its listing under the Ramsar Convention, which provides for international cooperation for the conservation and wise use of wetlands and their resources.

The rugged landscape consists of gallery forests, rivers, ponds, meadows and floodplains, with widespread shrub savanna, crucial to the populations of African Elephant and the Cheetah. Other animal populations include aardvarks, antelopes, baboons, buffalo, caracal, crocodiles, hippopotamuses, leopards, lions, monkeys serval and warthogs. There are many species of snakes, including pythons and puff adders.

Significant numbers of waterbirds have been recorded. Birdlife includes guinea fowl, wild duck, and partridge, as well as many tropical species.

Retrieved from https://www.newworldencyclopedia.org/p/index.php?title=List_of_national_parks_of_Benin&oldid=1091924
Categories:
Hidden category:
This page was last edited on 19 December 2022, at 02:28.
Content is available under Creative Commons Attribution/Share-Alike License; additional terms may apply. See Terms of Use for details.