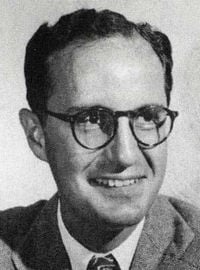 Kermit "Kim" Roosevelt, Jr. (February 16, 1916 – June 8, 2000), was an American intelligence officer who coordinated the Central Intelligence Agency's (CIA) Operation Ajax, which orchestrated the coup d’état against Iran's Mohammed Mosaddeq and returned Mohammad Reza Pahlavi, the Shah of Iran, to Iran's Peacock Throne in August 1953. He was also the grandson of American president Theodore Roosevelt. The coup was motivated by the desire to protect British and US interests, especially oil rights in Iran but it was also designed to strengthen a pro-Western regime against the possibility of a communist dominated government achieving power.

However, the Shah's regime was oppressive and rode roughshod over Iran's cultural and religious values. Increasingly, it was religious leaders, not communists, who led the opposition. The leaders of the 1979 Islamic revolution, which ended the Shah's reign, condemned him as a puppet of the decadent West. With other examples of Britain and the US supporting non-democratic, oppressive regimes during the Cold War, the legacy of the Mosaddeq coup makes the task of spreading freedom around the world harder to achieve, since the real intent of intervention by the Western powers, when this occurs, is dismissed as self-interest, with no genuine concern for the people of the country concerned. Kermit Roosevelt's activities on behalf of the US in Iran a year or two into the second half of the twentieth century continue to impact Iran-US relations in the twenty-first century, which remain strained.

When Kermit, Jr. was 27, his father, a chronic alcoholic, committed suicide in Alaska where he had been stationed as an intelligence officer with the U.S. Army.

Kermit Roosevelt, Jr. married Mary Lowe "Polly" Gaddis in 1937. They had three sons and a daughter. One of his sons, Kermit Roosevelt, Jr. (II) graduated from Groton School in the class of 1956 and is a Washington D.C. attorney. Another son, Mark Roosevelt is superintendent of the Pittsburgh, Pennsylvania public school district. His third son is Jonathan Roosevelt and his daughter is Anne Mason of Bethesda.

In the late 1940s he was on the board of directors of an anti-zionist organization called the Institute of Arab American Affairs. This organization republished an article by him in Foreign Affairs in pamphlet form opposing the creation of the State of Israel. [1]

By the early 1950s, Kermit Roosevelt, Jr. was a senior officer in the CIA's Middle Eastern division. At that time, there was a political crisis centered in Iran that commanded the focused attention of British and American intelligence outfits. In 1951, the Iranian parliament, under the leadership of the nationalist movement of Dr. Mohammed Mosaddeq, voted unanimously to nationalize the oil industry. This shut out the immensely profitable Anglo-Iranian Oil Company (AIOC), which was a pillar of Britain's economy and political clout. A month after that vote, Mossadeq was elected prime minister of Iran.[2] In response to nationalization, Britain placed an embargo on Iranian oil exports, which worsened the already fragile economy. Neither the AIOC nor Mossadeq was open to compromise in this period, with Britain insisting on a restoration of the AIOC and Mossadeq willing only to negotiate the terms of its compensation for lost assets. U.S. President Harry S. Truman ruled out joining Britain in a coup against Mossadeq, and Britain felt unable to act without American cooperation, particularly since Mossadeq had shut down their embassy in 1952.[2] Truman's successor, President Dwight D. Eisenhower, was persuaded by anti-communist arguments that there was potential for Iran's Communist Tudeh Party to capitalize on political instability and assume power, aligning Iran and its immense oil resources with the Soviet bloc. Coup plans which had stalled under Truman were revived by an eager intelligence corps, with powerful aid from the brothers John Foster Dulles (Secretary of State) and Allen Welsh Dulles (Director of Central Intelligence), after Eisenhower's inauguration in 1953.[2]

On June 19, 1953, Roosevelt slipped across the border under his CIA cover as "James Lockridge." He was put up in the capital, Tehran, in a place rented by British intelligence. As Mr. Lockridge, he became a regular at the Turkish Embassy where he played tennis. No one suspected that "Mr. Lockridge" was the grandson of the 26th US President but he came close to blowing his cover. When playing tennis and making some frustrating mistake he would cry out, "Oh Roosevelt!" Puzzled by this, his friends asked him about this interesting way of expressing his annoyance with his game. He explained that as loyal member of the Republican Party back in the States, that every Republican had nothing but scorn and hatred for Franklin D. Roosevelt and that he despised the man so much that he took to using FDR's name as a curse.[3]

Under the direction of Kermit Roosevelt Jr., the CIA and British intelligence funded and led a coup d’état to overthrow Prime Minister with the help of military forces loyal to the Shah through Operation Ajax.[4] The plot hinged on orders signed by the Shah to dismiss Mossadeq as prime minister and replace him with General Fazlollah Zahedi, a choice agreed on by the British and Americans. Despite the high-level coordination and planning, the coup initially failed and the Shah agreed that it was best for him to "temporarily leave the country" according to a "contingency plan".[5]. After a brief stay in Italy, the Shah was brought back, this time through a second coup which was successful. According to the Shah, he was fully briefed on the plan; he refers to Roosevelt as a friend.

In his book All the Shah's Men: An American Coup and the Roots of Middle East Terror, The New York Times reporter Stephen Kinzer reported[2] that the CIA ordered Roosevelt to leave Iran. Roosevelt ignored the order and, instead organized a second coup, this one successful. The deposed Mossaded was arrested, given a show trial, and placed in solitary confinement for three years in military prison, followed by house arrest for life. Zahedi was installed to succeed prime minister Mossadeq.

After that coup, Kinzer reported that the Shah said to Roosevelt, "I owe my throne to God, my people, my army - and to you."[6] The CIA-backed coup remains controversial. It had overthrown Iran's immensely popular, independent-minded and democratically-elected Prime Minister Mohammad Mossadegh and his democratically elected government. On the other hand, the coup's defenders often argue that Communism in Iran was permanently destroyed and the country was stable and friendly to the West for years. The Shah believed that Mossadegh planned to overthrow the Pahlavi Dynasty. He points out that when Mossadeq "took control of the war ministry in 1951 there were only 110 officers" belonging to the communist-leaning "Tudeh Party" but that "640 officers were members by the time he fell in 1953."[7] The Shah believed that Mossadeq planned to end the monarchy.

In the long term, the Shah's rule became despotic and would prove to fire the movement of Iranian religious exiles that led to the Shah's overthrow by the Shi'a Muslim cleric, the Ayatollah Ruhollah Khomeini in 1979 in the Iranian Revolution. After the deposed Shah was reluctantly granted admission to the U.S., Iranian militants held 66 American diplomats hostage in what would become known as the Iran Hostage Crisis.

Twenty-six years later, Kermit Roosevelt took the unusual step of writing a book about how he and the CIA carried out the operation. He called his book Countercoup to press home the idea that the CIA coup was staged only to prevent a takeover of power by the Tudeh Party closely backed by the Soviet Union. He also may have meant to imply that the exile of the Shah constituted the initial coup, and that he was merely restoring the rightful leader to power.

Roosevelt was certainly arguing that Mossadeq had to be removed to prevent a communist takeover of Iran because of his seizure of the oil industry and his other Socialist reforms as well as his cooperation with the Tudeh Party. This view was shared by many in the Intelligence community, although most notably the head of the CIA station in Iran resigned rather than participate in the coup. Many outside the intelligence community, including some in the Truman administration, had felt that Mossadeq should be kept in power to prevent a Communist takeover.

Kermit Roosevelt's activities on behalf of the US in Iran a year or two into the second half of the twentieth century continue to impact Iran-US relations in the twenty-first century. The 1953 Iranian coup took place in the broader context of Cold War rivalry between the USA and the Soviet Union. Iran remained a venue for espionage and counter-espionage through until the fall of the Pahlavi Dynasty. Ironically, the Pahlavi Dynasty had risen to power in Iran promising to end European influence over Iran's affairs. At the end of the nineteenth century, the country was run from the British and Russian embassies and even in the 1940's the two ambassadors more or less appointed delegates to parliament, handing a list of candidates to the Shah.[8] Almost all of Iran's services, including the Post Office, the police, the banks and the customs.[9]

Mohammad Reza Pahlavi was regarded by Iranians as "too Westernized", to the cost of religious and cultural values. It was the role that religion plays in Iran that the US failed to understand, according to Madeleine Albright;

"we were caught off balance by the revolution in Iran for the simple reason that we had never seen anything like it. As a political force, Islam was thought to be waning, not rising …. A revolution in Iran based on a religious backlash against America and the West? Other than a few fanatics, who would support such a thing? Our experts failed to grasp either the depth of hostility toward the Shah or the loyal following that the Muslim clerics could muster, even amid the rampant materialism of the late twentieth century.[10]

Unwisely, the Pahlavis alienated the religious leadership, which had historically partnered with the temporal leadership in administering the country. For most Shi'a, no government except that of the Mahdi has complete legitimacy. Once the religious leaders withdrew support for the Shah, his government enjoyed no legitimacy at all. If the Pahlavis had enjoyed more freedom to work out Iran's destiny without outside interference, their dynasty might still be in power. Sadly, the great powers past and present rarely considered or consider what impact their proxy battles have on the people in whose territories they played out, or play out, their ideological or imperial contests. Throughout the late nineteenth century and the early twentieth, Iran was a proxy venue for the "great game" between Britain and Russia; after World War II the game morphed into Cold War intrigue. "We thought" says Albright that we were "defenders of freedom, the good guys, who had never meant" Iran any harm. To Iranians, however, Americans are "intimately associated with a dictator who shunned Islamic values." By underestimating religion's significance in Iran, the US made enemies it "did not intend to make."[11] Some suggest that the US should have abandoned the Shah earlier, placing democratic values first. Others argue that the US should have defended the Shah in 1979 instead of abandoning him, placing "national security interests first."[11] What nations that defend freedom ought to do is to place human rights and justice at the center of all their inter-state involvements.