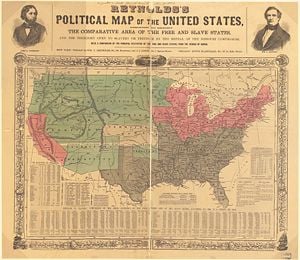 The Kansas-Nebraska Act of 1854 in United States created the territories of Kansas and Nebraska and opened new lands for settlement, and allowed the settlers to decide whether or not to allow slavery. The new Republican Party, formed in reaction against allowing slavery where it had been forbidden, emerged as the dominant force throughout the North.

The act was designed by Democratic senator Stephen A. Douglas of Illinois. While not repealing the Missouri Compromise of 1820, the new law did deem it "inoperative and void." The act established that settlers could decide for themselves whether to allow slavery, in the name of "popular sovereignty" or rule of the people. Opponents denounced the law as a concession to the slave-owning South. The act and the subsequent civil war known as Bleeding Kansas was a major and leading cause to the American Civil War.

The availability of tens of millions of acres of excellent farm land made it necessary to create a territorial infrastructure to allow settlement. Railroad interests were especially eager to start operations since they needed farmers as customers. Four previous attempts to pass legislation had failed. The solution was a bill proposed in January 1854 by Senator Stephen A. Douglas of Illinois. He was the Democratic party leader in the United States Senate, the chairman of the Committee on Territories, an avid promoter of railroads, an aspirant to the presidency, and, above all, a fervent believer in popular sovereignty: the policy of letting the residents of a territory decide whether or not they would permit slavery to exist.

Douglas was very interested in having a railroad extend from his home city of Chicago to the west, reaching eventually to California. However, many southerners wanted a transcontinental railroad that would start in New Orleans and extend to southern California. Douglas decided to make a compromise with the southern senators. In exchange for having the railroad go through Chicago, he would introduce the Kansas-Nebraska Act in 1854. At first he proposed one new territory of Nebraska, then two of Kansas and Nebraska. Popular sovereignty would decide whether there would be slavery.

The Douglas bill caused a firestorm of opposition because it allowed slavery north of the line agreed upon in the Missouri Compromise, effectively repealing it. Even before the bill passed, a new grass roots opposition party was being organized in most northern states, the Republican Party. Northern Democrats, southerners, and President Franklin Pierce supported the bill. Douglas used brilliant parliamentary maneuvers to get the bill passed on May 30, 1854. It was signed into law by Pierce; he was a "doughface"—a northerner whose political support came mostly from the South. There were now three political positions in American politics, represented by Northern Democrats (led by Douglas), the Northern Republicans, and the Southern Democrats. In 1860, they each selected a candidate for president of the United States. 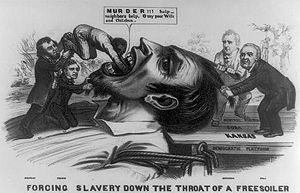 Forcing Slavery Down the Throat of a Freesoiler
An 1856 cartoon depicts a giant free soiler being held down by James Buchanan and Lewis Cass standing on the Democratic platform marked "Kansas," "Cuba" and "Central America." Franklin Pierce also holds down the giant's beard as Stephen A. Douglas shoves a black man down his throat.

The act divided the region into the Kansas Territory (south of the 40th parallel) and the Nebraska Territory (north of the 40th parallel). The most controversial provision was the stipulation that each territory would separately decide whether to allow slavery within its borders. This provision repealed the Missouri Compromise of 1820, which had prohibited slavery in any new states to be created north of latitude 36° 30' since Kansas and Nebraska would be north of that line and could now choose to allow slavery.

Pro-slavery settlers rushed to Kansas mainly from Missouri. Their influence in territorial elections was often bolstered by resident Missourians who crossed the border into Kansas purely for the purpose of voting in such ballots. They were called border ruffians by their opponents, a term coined by Horace Greeley. John Brown and his sons helped in the fight against them and killed five pro-slavery farmers in the Pottawatomie Massacre. Brown also helped defend a few dozen free soil supporters from several hundred pro-slavery supporters at the town of Osawatomie.

Successive territorial governors, usually sympathetic to slavery, attempted unsuccessfully to maintain the peace. The territorial capital of Lecompton, Kansas, the target of much agitation, consequently became such a hostile environment for free-soilers that they set up their own unofficial legislature at Topeka.

The hostility reached during the debate over what would become the Kansas-Nebraska Act turned brutally violent on the floor of the United States Senate. Senator Charles Sumner, a radical Republican and staunch abolitionist from Massachusetts, was savagely beaten with a walking stick by South Carolina congressman Preston Brooks. Sumner was a fiery orator who provoked many and rightly garnered a combative reputation.[1] In this instance he had rallied against Brooks' cousin, South Carolina senator Andrew Butler, ending a two day speech before the Senate, declaring Butler's position as "the crime against Kansas." The same day, May 21, 1856, a mob of pro-slavery settlers rode into the free soil town of Lawrence, Kansas and razed it, killing two of the townspeople.

In his "Crime against Kansas" speech, Sumner identified two Democratic senators as the principal culprits in this crime—Douglas of Illinois and Andrew Butler of South Carolina. He characterized Douglas to his face as a "noise-some, squat, and nameless animal" and "not a proper model for an American senator." Butler, who was not present, received more elaborate treatment. Mocking the South Carolina senator's stance as a man of chivalry, the Massachusetts senator charged him with taking "a mistress who, though ugly to others, is always lovely to him; though polluted in the sight of the world, is chaste in his sight—I mean," added Sumner, "the harlot, slavery."[2]

Outraged over the debate, Brooks' apparent rationale for the beating was instigated by the scathing attack against his cousin. Finding Sumner alone in the senate chamber the next day while Sumner was applying postage to copies of his Crime Against Kansas speech, Brooks stood over him and said, "I have read your speech twice over, carefully. It is a libel on South Carolina and on Senator Butler who is a relative of mine." Brooks then proceeded to use his metal topped walking stick to beat Sumner's head repeatedly. When the stick broke, Brooks continued to use the splintered end of the cane until he was restrained by other senators, who had been talking in a nearby cloakroom. Three years passed before Sumner was able to recover and return to the Senate.[3]

Following the attack, Brooks calmly walked out of the Senate chamber unmolested. Both men were instantly revered as heroes in their own states.[2]

The hostilities between the factions reached a state of low-intensity civil war which was extremely embarrassing to Pierce, especially as the nascent Republican Party sought to capitalize on the scandal of Bleeding Kansas. The routine ballot-rigging and intimidation practiced by pro-slavery settlers failed to deter the immigration of anti-slavery settlers who won a demographic victory by winning the race to populate the state.

President James Buchanan sent the Lecompton Constitution to Congress for approval. The Senate approved the admission of Kansas as a state under the Lecompton Constitution, despite the opposition of Senator Douglas, who believed that the Kansas referendum on the constitution, by failing to offer the alternative of prohibiting slavery, was unfair. The measure was subsequently blocked in the United States House of Representatives, where northern congressmen refused to admit Kansas as a slave state. Senator James Hammond of South Carolina (famous for his "King Cotton" speech) characterized this resolution as the expulsion of the state, asking, "If Kansas is driven out of the Union for being a slave state, can any Southern state remain within it with honor?"

The Kansas-Nebraska Act split the nation and pointed it toward civil war. The act itself virtually nullified the Missouri Compromise of 1820 and the Compromise of 1850. The turmoil over the act split both the Democratic and Know Nothing Party and gave rise to the Republican party that soon controlled most of the Northern states.

Retrieved from https://www.newworldencyclopedia.org/p/index.php?title=Kansas-Nebraska_Act&oldid=1080941
Categories:
Hidden category:
This page was last edited on 5 October 2022, at 02:44.
Content is available under Creative Commons Attribution/Share-Alike License; additional terms may apply. See Terms of Use for details.