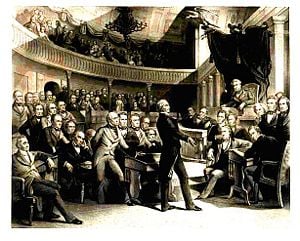 Henry Clay takes the floor of the Old Senate Chamber; Millard Fillmore presides as Calhoun and Webster look on.

The Compromise of 1850 was a series of laws that attempted to resolve the territorial and slavery controversies arising from the Mexican-American War (1846–1848). The five laws balanced the interests of the slave states and the free states. California was admitted as a free state, Texas received financial compensation for relinquishing claim to lands west of the Rio Grande in what is now New Mexico, the territory of New Mexico (including present-day Arizona and Utah) was organized without any specific prohibition of slavery, the slave trade (but not slavery itself) was abolished in Washington, D.C., and the stringent Fugitive Slave Act was passed, requiring all U.S. citizens to assist in the return of runaway slaves.

The measures, designed by Whig Senator Henry Clay (who failed to get them through himself), were shepherded to passage by Democratic Senator Stephen Douglas and Whig Senator Daniel Webster. The measures were opposed by Senator John C. Calhoun. The compromise was possible after the death of President Zachary Taylor, who was also in opposition to the compromise. Succeeding President Taylor was a strong supporter of the compromise, Vice President Millard Fillmore. The compromise temporarily defused sectional tensions in the United States, postponing the secession crisis and the American Civil War. The Wilmot Proviso, which never became law but would have banned slavery in territory acquired from Mexico, was dropped from the compromise. Instead the compromise further endorsed the doctrine of “popular sovereignty” for the New Mexico Territory. The various compromises lessened political contention for four years, until the relative lull was shattered by the divisive Kansas-Nebraska Act.

The western boundary of Texas was highly disputed. The Republic of Texas, which had seceded from Mexico, had been admitted to the United States and claimed territory that comprised the modern-day New Mexico. Texas also had ten million dollars in state debts it could not easily pay. The compromise solution was for the U.S. to pay the debts, while Texas allowed New Mexico to become a territory.

With very rapid population growth after the California Gold Rush, a state convention adopted an antislavery state constitution in late 1849, and applied for admission into the Union as a free state.

No territorial government had been formed for the remainder of the territory acquired from Mexico, including New Mexico and parts of what became Arizona and other states. The Mormon pioneers had organized the State of Deseret, but Congress was uneasy with the sheer size of the proposed state (which included all of present-day Utah and Nevada and parts of Wyoming, Colorado, New Mexico, Arizona, and California) as well as its low population and the dominance of the Mormons.

The status of slavery in these territories would be determined by popular sovereignty, meaning that the territories' own populations would vote on the matter. No one expected slavery to take root because of the inhospitable geography.

The two issues covered by the compromise that did not grow out of the Mexican War were the abolition of the slave trade in the District of Columbia, and the passage of a new fugitive slave law, the Fugitive Slave Act.

Congress convened on December 3, 1849. On January 29, 1850, Whig Senator Henry Clay gave a speech that called for compromise on the issues dividing the Union. However, Clay's specific proposals for achieving a compromise, including his idea for Texas's boundary, were not adopted. Senator Stephen A. Douglas, Democrat of Illinois, guided the compromise to passage. The compromise came to coalesce around a plan dividing Texas at its present-day boundaries, creating territorial governments with popular sovereignty (without the Wilmot Proviso) for New Mexico and Utah, admitting California as a free state, abolishing the slave auctions in the District of Columbia, and enacting a harsh new fugitive slave law.

View of Davis and Southern Democrats

Some Southern Democrats, led by Jefferson Davis, opposed Douglas's and especially Clay's compromise because they would have admitted California as a free state, thus disturbing the balance of power between North and South in the Senate, and because they would have negated some of Texas's land claims. They also opposed as unconstitutional the abolition of the slave auctions in the District of Columbia.

View of Seward and Northern Whigs

Most Northern Whigs, led by William Henry Seward who delivered his famous Higher Law speech during the controversy, opposed the compromise as well because it would not have applied the Wilmot Proviso to the western territories and because of the Democratic new fugitive slave law, which would have pressed ordinary citizens into duty on slave-hunting patrols. This fugitive slave law provision was inserted by Democratic Virginia Senator James M. Mason to coerce border-state Whigs, who faced the greatest danger of losing slaves as fugitives but who were lukewarm on general sectional issues related to the South.

Northern Democrats and Southern Whigs did support the compromise. Southern Whigs, many of who were from the border states, supported the stronger fugitive slave law.

On April 17, 1850, a "Committee of Thirteen" agreed on the border of Texas as part of Clay's plan. The dimensions were later changed. That same day, during debates on the measures in the Senate, Vice President Millard Fillmore and Thomas Hart Benton verbally sparred, with Fillmore charging that the Missourian was "out of order." The heated exchange became so emotionally charged that Senator Benton was nearly shot by compromise floor leader Henry Foote of Mississippi.

In early June, nine slave-holding Southern states sent delegates to the Nashville Convention to determine their course of action should the compromise take hold. While some delegates preached secession, eventually the moderates ruled, and they proposed a series of compromises, including extending the geographic dividing line designated by the Missouri Compromise of 1820 to the Pacific Coast.

The various bills were initially combined into one "omnibus" bill, which failed to pass the Senate because only a minority supported all the provisions. The situation was changed by the death of President Taylor and the accession of Fillmore on July 9, 1850. The influence of the new administration was now thrown in favor of the compromise. Illinois Senator Stephen Douglas and his supporters in the House assembled different majorities for each of five separate bills. The Northern Democrats held together and supported each of the bills and gained Whigs or Southern Democrats to pass each one. All passed and were signed by President Fillmore between September 9 and September 20, 1850.

The Fugitive Slave Act made any federal marshal or other official who did not arrest an alleged runaway slave liable to a fine of one thousand dollars. Law-enforcement officials everywhere in the United States had a duty to arrest anyone suspected of being a fugitive slave on no more evidence than a claimant's sworn testimony of ownership. The suspected slave could not ask for a jury trial or testify on his or her own behalf. In addition, any person aiding a runaway slave by providing food or shelter was to be subject to six months imprisonment and a one thousand dollar fine. Officers capturing a fugitive slave were entitled to a fee for their work.

The compromise in general proved widely popular politically, as both parties committed themselves in their platforms to the finality of the compromise on sectional issues. The strongest opposition in the South occurred in the states of South Carolina, Georgia, Alabama, and Mississippi, but Unionists soon prevailed, spearheaded by Georgians Alexander Stephens, Robert Toombs, and Howell Cobb and the creation of the Georgia Platform. This peace was broken only by the divisive Kansas-Nebraska Act introduced by Stephen Douglas, which repealed the Missouri Compromise and led directly to the formation of the Republican Party, whose capture of the national government in 1860 led directly to the secession crisis of 1860–1861.

Many historians argue that the compromise played a major role in postponing the American Civil War for a decade, during which time the Northwest was growing wealthier and more populous, and was being brought into closer relations with the Northeast. During that decade the Whigs collapsed, bringing about a major realignment with the new Republican Party dominant in the North. But others argue that the compromise only made pre-existing sectional divisions more obvious and laid the groundwork for future conflict. In this view the Fugitive Slave Act helped polarize North and South, as shown in the enormous reaction to Harriet Beecher Stowe's novel Uncle Tom's Cabin. The passage of the Fugitive Slave Act aroused feelings of bitterness in the North.

The delay of hostilities for ten years allowed the free economy of the northern states to industrialize. The southern states lacked the ability to heavily industrialize, mainly because of their reliance on slave labor and cash crop production.. By 1860, the northern states had many more miles of railroad, a larger steel production industry, more modern factories, and a larger population. The North was better able to supply, equip, and man its armed forces, an advantage that would prove decisive in the later stages of the war.