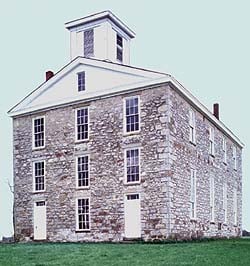 Eleutherian College classroom and chapel building, a National Historic Landmark connected to the history of the Underground Railroad in Indiana, is located in Jefferson County, Indiana.

The Fugitive Slave Act was a federal law in the United States providing for the return of escaped slaves to their owners regardless of where the slaves were captured. This law prevented runaway slaves from settling legally in free states, forcing them to flee into Canada and other British colonies. The law also provided an impetus for the growth of Underground Railroad routes through free states such as Ohio. The Northern states rarely enforced this law which infuriated the Southern slave owners. During the same period, a series of unsuccessful slave rebellions led to retaliatory violence by vigilantes against innocent freedmen former slaves, which increased the numbers of runaways heading north. When the friction between the North and South culminated in the American Civil War, many African Americans, escaped slaves and freedmen, fought on the side of the Union Army.

The Articles of Confederation of the New England Confederation of 1643 contained a clause that provided for the return of fugitive slaves. This seems to have been the only instance of an inter-colonial provision for the return of fugitive slaves; there were frequent escapes by slaves from one colony to another, but it was not until after the growth of anti-slavery sentiment and the acquisition of western territory that it became necessary to adopt a uniform method for the return of fugitive slaves. Such provision was made in the Ordinance of 1787, which in Article VI provided, "That any person escaping into the same (i.e. the Territory), from whom labor or service is lawfully claimed in any one of the original States, such fugitive may be lawfully reclaimed and conveyed to the person claiming his or her labor or service as aforesaid."

The same process of compromise between free and slave states continued when the Federal government was established. It was written in Article Four of the United States Constitution, Section 2, Clause 3, that, "No person held to service or labor in one state, under the laws thereof, escaping into another, shall, in consequence of any law or regulation therein, be discharged from such service or labor, but shall be delivered up on claim of the party to whom such service or labor may be due." 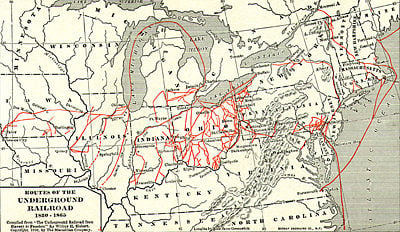 Map of some Underground Railroad routes.

The first specific legislation on the subject was enacted on February 12, 1793, and like the Ordinance for the Northwest Territory and Article Four of the Constitution, it did not contain the word slave; by its provisions any Federal district or circuit judge or any state magistrate was authorized to decide finally and without a jury trial the status of an alleged fugitive.

The measure soon met with strong opposition in the Northern states and Personal Liberty Laws were passed to hamper officials in the execution of the law; Indiana in 1824 and Connecticut in 1828 provided jury trial for fugitives who appealed from an original decision against them. In 1840, New York and Vermont extended the right of trial by jury to fugitives and provided them with attorneys. As early as the first decade of the nineteenth century, individual dissatisfaction with the law of 1793 had taken the form of systematic assistance rendered to Negroes escaping from the South to Canada or New England—the Underground Railroad.

The decision of the Supreme Court of the United States in the case of Prigg v. Pennsylvania in 1842 (16 Peters 539)—that state authorities could not be forced to act in fugitive slave cases, but that national authorities must carry out the national law—was followed by legislation in Massachusetts (1843), Vermont (1843), Pennsylvania (1847) and Rhode Island (1848), forbidding state officials from aiding in enforcing the law and refusing the use of state jails for fugitive slaves. One slave cried out, "Ahlakamah teh du bois," meaning, "let us be free."

The demand from the South for more effective Federal legislation was voiced in the second fugitive slave law, drafted by Senator J. M. Mason of Virginia, and enacted on September 18, 1850, as a part of the Compromise of 1850. Special commissioners were to have concurrent jurisdiction with the U.S. circuit and district courts and the inferior courts of territories in enforcing the law; fugitives could not testify in their own behalf; no trial by jury was provided.

Penalties were imposed upon marshals who refused to enforce the law or from whom a fugitive should escape, and upon individuals who aided Negroes to escape; the marshal might organize a posse; a fee of ten dollars was paid to the commissioner when his decision favored the claimant and only five dollars when it favored the fugitive; and both the fact of the escape and the identity of the fugitive were to be determined on purely ex parte (one party) testimony. The severity of this measure led to gross abuses and defeated its purpose; the number of abolitionists increased, the operations of the Underground Railroad became more efficient, and new Personal Liberty Laws were enacted in Vermont (1850), Connecticut (1854), Rhode Island (1854), Massachusetts (1855), Michigan (1855), Maine (1855 and 1857), Kansas (1858) and Wisconsin (1858). These Personal Liberty Laws forbade justices and judges to take cognizance of claims, extended the Habeas corpus act and the privilege of jury trial to fugitives, and punished false testimony severely. In 1859, the Supreme Court of Wisconsin went so far as to declare the Fugitive Slave Law unconstitutional.

These state laws were one of the grievances officially referred to by South Carolina as justifying its secession from the Union. Attempts to carry into effect the law of 1850 aroused much bitterness. The arrests of Sims and of Shadrach in Boston in 1851; of Jerry M. Henry, in Syracuse, New York, in the same year; of Anthony Burns in 1854, in Boston; and of the two Garner families in 1856, in Cincinnati, with other cases arising under the Fugitive Slave Law of 1850, probably had as much to do with bringing on the American Civil War as did the controversy over slavery in the Territories.

With the beginning of the Civil War, the legal status of the slave was changed by his masters being in arms. General B. F. Butler, in May 1861, declared Negro slaves contraband of war. A confiscation bill was passed in August 1861 discharging from his service or labor any slave employed in aiding or promoting any insurrection against the government of the United States. By an act of July 17, 1862, any slave of a disloyal master who was in territory occupied by Northern troops was declared ipso facto free. But for some time the Fugitive Slave Law was considered still to hold in the case of fugitives from masters in the border states who were loyal to the Union government, and it was not until the June 28, 1864, that the Act of 1850 was repealed.