Alexander Hamilton Stephens (February 11, 1812 – March 4, 1883) was Vice President of the Confederate States of America during the American Civil War. He also served as a Congressman from Georgia and as Governor of Georgia from 1882 until his death in 1883. He was a strong supporter of state's rights and white supremacy. The causes of the Civil War remain the subject of debate and it is easy to depict the conflict as one between the egalitarian inclined North, which opposed slavery and the slave-owning South, where the plantation owners represented a ruling aristocracy in all but name. On the one hand, this characterization of the war is too simplistic. On the other, the leading role played in the South by such men as Confederate Vice-President Stephens suggests that had the South won, slavery would not have been abolished and racist attitudes would have continued to dominate government policy and private practice.

Stephens was born on a farm near Crawfordville, Taliaferro County, Georgia to Andrew B. and Margaret Grier Stephens. The couple had married in 1806. Stephens was named after his grandfather, a Scot who had served in the Revolutionary War. His mother died shortly after his birth from pneumonia and his father married a second wife, Matilda Lindsey, soon after. Stephens was close to his stepmother and, especially, to his father and was devastated when they both died from pneumonia in 1826, when he was 14. He was taken in by his uncle, Aaron Grier. He grew up poor and acquired his education through the generosity of several benefactors, one of whom was the Presbyterian minister Alexander Hamilton Webster. Out of deep respect for his mentor, Stephens adopted Webster's middle name Hamilton as his own. (He was not named after Alexander Hamilton as most assume.) Stephens attended the Franklin College (later the University of Georgia) in Athens, where he was roommates with Crawford W. Long and a member of the Phi Kappa Literary Society. He graduated at the top of his class in 1832.[1]

After an unhappy couple of years teaching school, he pursued legal studies, passed the bar in 1834, and began a successful career as a lawyer in Crawfordville. During his 32 years of practice, he gained (among other things) a reputation for being a capable defender of the wrongfully accused. Of all his defendants charged with capital crimes, not one of them was executed. One notable case was the trial of a black slave woman who was accused of attempted murder. Despite the circumstantial evidence presented against her, Stephens volunteered to defend her in court and successfully persuaded the jury to acquit the woman, thus saving her life.

As his wealth increased, Stephens began acquiring land and slaves. By the time of the American Civil War, Stephens owned 34 slaves and several thousand acres. In 1836, Stephens began what became a lifelong career in public service when he was elected to the Georgia House of Representatives. He served there until moving on to the Georgia State Senate in 1842. As a national lawmaker during the crucial two decades before the American Civil War, Stephens was involved in all the major sectional battles. He began as a moderate defender of slavery, but later accepted all of the prevailing Southern rationales used to defend the institution.

Stephens quickly rose to prominence as one of the leading Southern Whigs in the House. He supported the annexation of Texas in 1845 (but only after opposing it first because he felt it was a bad idea if based solely upon expanding slavery). Along with his fellow Whigs, he vehemently opposed the Mexican-American War. He was an equally vigorous opponent of the Wilmot Proviso, which would have barred the extension of slavery into territories acquired by the United States during the war with Mexico. Stephens along with fellow Georgia congressman Robert Toombs worked diligently to secure the election of Zachary Taylor in 1848. Both were chagrined and angered when Taylor proved less than pliable on aspects of the Compromise of 1850. The death of Taylor removed the major barrier to passage of the compromise measures. Stephens and Toombs both supported the Compromise of 1850, and then returned to Georgia to secure support for the measures at home. Both men were instrumental in the drafting and approval of the Georgia Platform, which rallied unionists throughout the Deep South.[2]

By this time, Stephens had departed the ranks of the Whig party—its northern wing proving inimical to what he regarded as non-negotiable Southern interests. Back in Georgia, Stephens, Toombs, and Democratic Congressman Howell Cobb formed the Constitutional Union Party. The party overwhelmingly carried the state in the ensuing election and, for the first time, Stephens returned to Congress no longer a Whig.

Despite his late arrival to the Democratic Party, Stephens quickly rose, even serving as James Buchanan's floor manager in the House during the battle for the Lecompton Constitution for the Kansas Territory in 1857.

Stephens did not run for renomination in 1858. 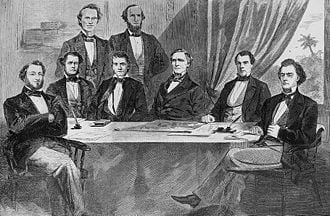 In 1861, Stephens served as a delegate to the Georgia convention that voted to secede from the United States. During the state convention, as well as during the 1860 presidential campaign, Stephens called for the South to remain loyal to the Union, likening it to a leaking but fixable boat. During the convention he reminded his fellow delegates that Republicans were a minority in Congress (especially in the Senate) and, even with a Republican president, would be forced to compromise just as the two sections had for decades. And, because the Supreme Court had voted 7–2 in the Dred Scott case, it would take decades of Senate-approved appointments to reverse it. He voted against secession in the Georgia convention but asserted the right to secede if the federal government continued allowing northern states to effectively nullify the Constitutionally empowered Fugitive Slave Law with so-called "personal liberty laws" that made recapture go through trial. He had a big hand in helping draft the Confederate constitution.[3] He was elected to the Confederate Congress, and was chosen by the Congress as vice president of the provisional government. He was then elected vice president of the Confederacy. He took the oath of office on February 11, 1861, and served until his arrest on May 11, 1865. Vice President Stephens officially served in office eight days longer than President Jefferson Davis; he took his oath seven days prior to Davis's inauguration and was captured the day after Davis. 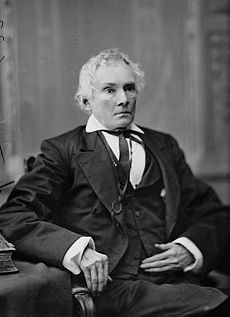 Alexander Stephens in his later years.

On the brink of the Civil War, on March 21, 1861, Stephens gave his famous Cornerstone Speech in Savannah, Georgia. In it he reaffirmed that "African Slavery … was the immediate cause of the late rupture and present revolution." He went on to assert that the then-prevailing "assumption of the equality of races" was "fundamentally wrong." "Our new [Confederate] government is founded … upon the great truth that the negro is not equal to the white man; that slavery—subordination to the superior race—is his natural and normal condition," and, furthermore, "With us, all of the white race, however high or low, rich or poor, are equal in the eye of the law. Not so with the negro. Subordination is his place. He, by nature, or by the curse against Canaan, is fitted for that condition which he occupies in our system."[4]

President Davis was dismayed by the speech since it effectively turned the focus away from state's rights and towards the preservation of slavery. Stephens felt that bringing greater attention to the issue was necessary. By 1862 his views had helped to distance him from state decisionmaking.[5]

Stephens suffered from illness and disease throughout his life; he weighed only 96 pounds. While his voice was described as shrill and unpleasant, at the beginning of the Civil War, a northern newspaper described him as "the Strongest Man in the South" because of his intelligence, judgment, and eloquence.

A staunch states rights enthusiast, actions of the Davis government soon drove Stephens into political opposition. He returned to Georgia and became a champion of Governor Joseph E. Brown. In 1862 Stephens became the leader of the Senate opposition to the Davis administration. However, he stayed good friends with Jefferson Davis, and was a stanch supporter of Davis.

On February 3, 1865, serving as one of several commissioners representing the Confederacy, he met with President Abraham Lincoln on the steamer River Queen at the Hampton Roads Conference, which attempted to reach a peaceful ending to the Civil War. He was arrested at his home in Crawfordville, Georgia, on May 11, 1865. 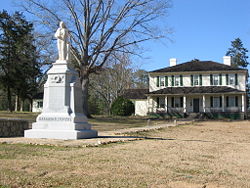 After the Civil War, he was imprisoned in Fort Warren, Boston Harbor, for five months until October 1865. In 1866 he was elected to the United States Senate by the first legislature convened under the new Georgia State constitution, but did not present his credentials, as the State had not been readmitted to the Union. He was elected as a Democrat to the 43rd Congress to fill the vacancy caused by the death of Ambrose R. Wright, and was re-elected to the 44th and to the three succeeding Congresses, serving from December 1, 1873 until his resignation on November 4, 1882, at which time he was elected governor of Georgia. His tenure as governor proved brief; Stephens died on March 4, 1883, mere weeks after taking office. According to a former slave, a gate fell on Stephens "and he was crippled and lamed up from dat time on 'til he died."[6]

He was interred in Oakland Cemetery in Atlanta, then re-interred on his estate, Liberty Hall, near Crawfordville, Georgia.

He published A Constitutional View of the War between the States (two volumes, 1868-1870) in which he wrote about the South's position in regard to the doctrines of State sovereignty and secession.[7]

Toccoa, Georgia serves as seat of a county in north Georgia that bears his name, as does a state park just outside of Crawfordville, Georgia.

Stephens defended the principle of state's rights throughout his lifetime. He felt that only this maxim, supported by an element of popular control, could ensure a government as intended by the Founders. He was also a staunch supporter of slavery and was dedicated to affirming white supremacy. Stephens was deeply convinced that blacks were inherently inferior to whites and would never be fitted for equality. He was reluctant to support secession, but once it had occurred he opted to join the rebels' ranks and push his beliefs from the seat of the Confederate Vice Presidency.