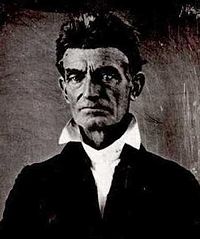 The Pottawatomie Massacre occurred during the night of May 24 and the morning of May 25, 1856. In reaction to the sacking of Lawrence, Kansas by pro-slavery forces, John Brown and a band of abolitionist settlers (some of them members of the Pottawatomie Rifles) killed five pro-slavery settlers north of Pottawatomie Creek in Franklin County, Kansas. This was one of the many bloody episodes in Kansas preceding the American Civil War, which came to be known collectively as Bleeding Kansas.

Brown was quoted as justifying the killings in accordance to "God’s will," and his intention was to "strike terror in the hearts of the proslavery people." These murders accomplished terror but also led to further violence and unrest in the United States.

John Brown was particularly affected by the sacking of Lawrence, in which a sheriff-led posse destroyed newspaper offices, a hotel, and killed two men, as well as by the brutal beating of anti-slavery Senator Charles Sumner by Preston Brooks in the Senate Chamber, while the Senate chamber was empty. Sumner had given a speech the same day to the U.S. Senate. As he was applying postage to copies to be mailed to his constituents, in retaliation Brooks (a member of the United States House of Representatives), came into the Senate chamber, walked up to the seated Sumner, and with the metal butt of his walking stick, caned him nearly to death.)[1]

The violence was accompanied by celebrations in the pro-slavery press, with writers such as B. F. Stringfellow of the Squatter Sovereign proclaiming that proslavery forces "are determined to repel this Northern invasion and make Kansas a Slave State; though our rivers should be covered with the blood of their victims and the carcasses of the Abolitionists should be so numerous in the territory as to breed disease and sickness, we will not be deterred from our purpose..." [2]Brown was outraged by both the violence of proslavery forces, and also by what he saw as a weak and cowardly response by the antislavery partisans and the Free State settlers, who he described as cowards.

The Pottawatomie Rifles was a group of abolitionist Kansas settlers of Franklin and Anderson counties, both of which are situated along the Pottawatomie Creek. The band was formed in the fall of 1855 as an armed militia to counter growing proslavery presence (an influx of men known as Border Ruffians) in the area.

Led by John Brown's son, John Brown, Jr., men from the Pottawatomie Rifles took part in much of the violence known as Bleeding Kansas. Although John Brown frequently accompanied his son, he was not officially a member of the group.

The Pottawatomie Rifles and other anti-slavery groups set out on the morning of May 22, 1856, when they heard of the sack of Lawrence and the arrest of Deitzler, Brown, and Jenkins. However, they continued their march toward Lawrence, not knowing whether their assistance might still be needed, and encamped that night near the Ottawa Creek. They remained in the vicinity until the afternoon of May 23, at which time they decided to return home.

On May 23, John Brown, Sr. selected a party to go with him on a private expedition. Captain John Brown, Jr., objected to their leaving his company, but seeing that his father was unmovable, silently acquiesced, telling him to "do nothing rash." The company consisted of John Brown, four of his other sons — Frederick, Owen, Watson, and Oliver — Henry Thompson (his son-in-law), Thomas Winer, and James Townsley, whom John had induced to carry the party in his wagon to their proposed field of operations.

They encamped that night between two deep ravines on the edge of the timber, some distance to the right of the main traveled road. There they remained unobserved until the following evening of May 24. Some time after dark, the party left their place of hiding and proceeded on their "secret expedition." Late in the evening, they called at the house of James P. Doyle and ordered him and his two adult sons, William and Drury, to go with them as prisoners. (Doyle's 16-year-old son, John, who was not a member of the pro-slavery Law and Order Party, was left with his mother.) The three men followed their captors out into the darkness, where Owen Brown and Salmon Brown killed them with broadswords. John Brown, Sr., did not participate in the stabbing but fired a shot into the head of the fallen James Doyle to ensure death. [3]

Brown and his band then went to the house of Allen Wilkinson and ordered him out. He was slashed and stabbed to death by Henry Thompson and Theodore Winer, possibly with help from Brown's sons. [4] From there, they crossed the Pottawatomie, and some time after midnight, forced their way into the cabin of James Harris at sword-point. Harris had three house guests: John S. Wightman, Jerome Glanville, and William Sherman, the brother of Henry Sherman ("Dutch Henry"), a militant pro-slavery activist. Glanville and Harris were taken outside for interrogation and asked whether they had threatened Free State settlers, aided border ruffians from Missouri, or participated in the sack of Lawrence. Satisfied with their answers, Brown's men allowed Glanville and Harris return to the cabin. William Sherman was led to the edge of the creek and hacked to death with the swords by Brown's sons, Winer, and Thompson.[5]

Having learned at Harris's cabin that "Dutch Henry," their main target in the expedition, was away from home on the prairie, they ended the expedition and returned to the ravine where they had previously encamped.