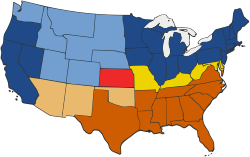 Bleeding Kansas, sometimes referred to in history as Bloody Kansas or the Border War, was a sequence of violent events involving anti-slavery (“free-staters”) and pro-slavery "border ruffians" elements that took place in Kansas–Nebraska Territory and the western frontier towns of the U.S. state of Missouri between roughly 1854 and 1858 attempting to influence whether Kansas would enter the Union as a free or slave state.

The Kansas-Nebraska Act of 1854 created the territory and provided the cause of the ensuing guerilla warfare. Enshrined in the Kansas-Nebraska Act, which nullified the Missouri Compromise, is the principle now known as "popular sovereignty," an idea heavily supported by U.S. Senator Stephen A. Douglas, chairman of the Senate Committee on Territories and greatly contested by abolitionists. Popular sovereignty was an attempt to offer concessions to the Southern states through making possible the expansion of slavery into both western and northern territories. Popular sovereignty, also known in Kansas Territory as "squatter sovereignty," was first developed by U.S. Senator Lewis Cass.

The act established that the question of the expansion of slavery in the new states of Kansas and Nebraska would be decided by the inhabitants of the states. It had been assumed that slave-owning Southerners would occupy Kansas and make it a slave state, while free state advocates would settle Nebraska. Things worked out as anticipated in Nebraska, but not in Kansas.

The reason most of the population of America cared about the introduction of slave and non-slave states was the Senate. In the beginning, the Senate was evenly split between senators that came from slave states and non-slave states. Each side feared what the other side would do if it achieved power in the Senate, namely abolishing slavery or making it legal everywhere in the U.S. This is why so many political battles were fought over slavery in new states.

Meeting of North and South

The first organized immigration to Kansas Territory was by citizens of southern states, most notably neighboring Missouri, who came to the territory to secure the expansion of slavery. Pro-slavery settlements were established by these immigrants at Leavenworth and Atchison.

At the same time, several anti-slavery organizations in the North, most notably the New England Emigrant Aid Company, were organizing to fund several thousand settlers to move to Kansas and vote to make it a free state. These organizations helped to establish Free-State settlements further into the territory, in Topeka, Manhattan, and Lawrence. Abolitionist preacher Henry Ward Beecher collected funds to arm like-minded settlers with Sharps rifles, leading the precision rifles to become known as "Beecher's Bibles." By the summer of 1855, approximately 1,200 New Englanders had made the journey to the new territory, armed and ready to fight.

Rumors had spread through the South that 30,000 Northerners were descending on Kansas, and in November 1854, thousands of armed Southerners known as "border ruffians," mostly from Missouri, poured over the line to vote for a pro-slavery congressional delegate. Only half the ballots were cast by registered voters, and at one location, only 20 of over six hundred voters were legal residents. The pro-slavery forces won the election. More significantly, the border ruffians repeated their actions on March 30, 1855, when the first territorial legislature was elected, swaying the vote again in favor of slavery. The pro-slavery territorial legislature convened in Pawnee on July 2, 1855, but after one week it adjourned to the Shawnee Mission on the Missouri border, where it began passing laws to institutionalize slavery in Kansas Territory. This was the touchstone for the commencement of open violence.

In August 1855, a group of free-staters met and resolved to reject the pro-slavery laws passed by the territorial legislature. This meeting led to the drafting of the Topeka Constitution and the formation of a shadow government. However, another branch of the movement took a more martial point of view. In October 1855, John Brown came to Kansas Territory to fight slavery. By November 1855, the (relatively bloodless) "Wakarusa War" between the two sides had begun. In a message to Congress on January 24, 1856, President Franklin Pierce declared the Free-State Topeka government to be a "revolution" against the rightful leaders. 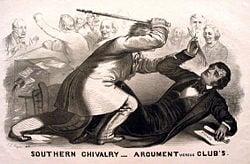 On May 21, 1856, a group of border ruffians entered the Free-State stronghold of Lawrence, where they burned the Free State Hotel, destroyed two printing presses, and ransacked homes and stores. A much more serious attack, the Battle of Lawrence, occurred in August 1863. The day after, Congressman Preston Brooks from South Carolina physically attacked Senator Charles Sumner of Massachusetts in the Senate chambers, in retaliation for a speech Sumner made that criticized Southerners for pro-slavery violence in Kansas. These acts in turn inspired John Brown to lead a group of men in Kansas Territory on an attack at a pro-slavery settlement at Pottawatomie Creek. The group, which included four of Brown's sons, dragged five pro-slavery men from their homes and hacked them to death with broadswords. These actions are regarded by some as the opening salvo of the Civil War.

In 1856 the official territorial capital was moved to Lecompton, a town only 12 miles (19 km) from Lawrence. In April 1856, a three-man congressional investigating committee arrived in Lecompton to look into the troubles. The majority report of the committee found the elections to be improperly influenced by border ruffians. The president failed to follow its recommendations, however, and continued to recognize the pro-slavery legislature as the legitimate government of Kansas. In fact, on July 4, 1856, Pierce sent federal troops to break up an attempted meeting of the shadow government in Topeka.

In August, thousands of pro-slavery Southerners formed into armies and marched into Kansas. That same month, Brown and several of his followers engaged four hundred pro-slavery soldiers in the Battle of Osawatomie. The hostilities raged for another two months until Brown departed Kansas Territory, and a new territorial governor, John W. Geary, took office and managed to prevail upon both sides for peace. This was followed by a fragile peace broken by intermittent violent outbreaks for two more years. The last major outbreak of violence was touched off by the Marais des Cygnes massacre in 1858, where border ruffians killed five free-stater men.

An adjunct to the guerrilla warfare in Bleeding Kansas was the fight over the constitution that would govern the state of Kansas. Several constitutions were drafted, though the 1855 Topeka Constitution, which created the shadow free-state government essentially by fiat, was not a viable option.

In 1857 a Kansas constitutional convention was convened, which drafted what has become known as the Lecompton Constitution, a pro-slavery document. The abolitionist forces boycotted the ratification vote because it failed to offer them a means to vote against slavery. The Lecompton Constitution was accepted by President James Buchanan, who urged acceptance and statehood. Congress disagreed and ordered another election. In the second election the pro-slavery forces boycotted the process, allowing the anti-slavery forces to claim victory by defeating the document. In the end, the Lecompton Constitution died because it was not clear whether it represented the will of the majority.

In mid-1859, the Wyandotte Constitution was drafted; this document represented the prevailing abolitionist view. It was approved by the electorate by a 2-to-1 margin, and Kansas entered the Union as a free state pursuant to its terms on January 29, 1861.