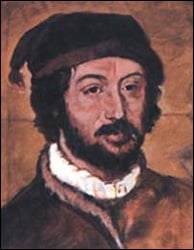 Juan de la Cosa (c. 1460 – February 28, 1510) was a Spanish cartographer, conquistador, and explorer. He made the earliest extant European world map to incorporate the territories of the Americas that were discovered in the fifteenth century, sailed the first 3 voyages with Christopher Columbus, and was the owner/captain of the Santa María. De la Cosa was also a skilled cartography; in particular, he is renowned for his cartography skills on the world map knows as the Mappa Mundi of 1500.

De la Cosa's voyages helped towards the creation of a more inter-connected world, as the "discovery" of the Americas brought people together from both sides of the Atlantic. On the one hand, Europen colonialism would exploit both the lands and the people of the Americas, causing untold misery. Yet, humanity cannot move towards establishing a world of peace and security for everyone until people everywhere are aware that they belong to a single human family.

According to tradition, de la Cosa was born in 1460, at Sta. Maria del Puerto (Santoña), in Cantabria, Spain. From early childhood he spent time on the water. From the waters of his native country, which he knew thoroughly, he soon ventured on to the coast of Western Africa, which was at that time the goal of many Spanish expeditions. The first reliable references place him in Portugal in 1488, meeting the explorer Bartolomeu Dias, who had just sailed around the Cape of Good Hope. 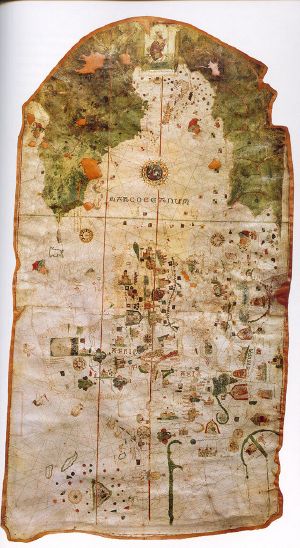 De la Cosa sailed with Christopher Columbus on his first three voyages to the New World. He owned and was master of Santa María, the flagship of Columbus' first voyage in 1492. The boat shipwrecked the same year, on December 24, upon the Haitian coast. Some references indicate that Columbus personally accused de la Cosa for the wreck.

In 1494, De la Cosa received compensation from the Kings for the sinking of his ship on his first voyage. He was awarded the right to transport docientos cahíces de trigo (two hundred cahices of flour—a cahice being approximately 15 bushels) from Andalucia to Biscay, and was exempted from certain duties.

On his fourth voyage, in 1499, de la Cosa was the first pilot for the expedition of Alonso de Ojeda and Amerigo Vespucci, and with them was among the first to set foot on the South American mainland on the Gulf of Paria. At the same time, they explored the coast from Essequibo River to Cape Vela.

In spite of not receiving much remuneration, De la Cosa had benefited considerably, having mapped in detail the coast of the region he explored, information he would use to create his famous map.

On the fifth voyage, in 1500, de la Cosa, Rodrigo de Bastidas and Vasco Núñez de Balboa explored the lands of present-day Colombia and Panama. He explored further along the South American coast to the isthmus of Panama, and returned to Haiti in 1502. When the Spanish court found, soon afterward, that the Portuguese had made several incursions into the newly discovered country, Queen Isabella sent Juan de la Cosa at the head of a delegation to Portugal to protest this incursion. De la Cosa was arrested and incarcerated, liberated only with the help of Queen Isabella.

Voyage on his own

De la Cosa was nominated alguazil major, and in 1504-05(?) (or 1506) was commander of an expedition to the Pearl Islands and the Gulf of Uraba to found settlements there. At the same time he visited Jamaica and Haiti.

In 1509, Juan de la Cosa set out for the seventh and last time for the New World. He carried two hundred colonists on three ships, and on reaching Haiti placed himself under the command of Alonso de Ojeda, who added another ship with one hundred settlers to the expedition. After having settled an old border dispute between Alonso de Ojeda and Diego de Nicuesa, they went with Francisco Pizarro into de Ojeda's territory and landed at Cartagena against the warnings of de la Cosa, who proposed they disembark on the more peaceful coast of the Gulf of Uraba. Upon leaving the ship there was a scuffle between the Spanish and the natives on the Bay of Calamar. 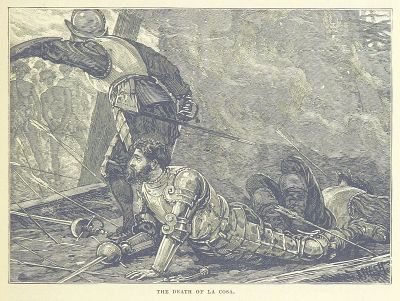 An illustration of the death of Juan de la Cosa

Proud of the Spanish victory, de Ojeda decided to delve further into the forest to the settlement of Turbaco. When they arrived at the town, they were attacked by the natives and de la Cosa was shot with poison arrows and killed by Indians. De Ojeda managed to escape and ran to the bay where he told a passing expedition of the murderous natives. De Ojeda and the men of the other expedition returned to Turbaco and killed all of its inhabitants to avenge de la Cosa's death. De la Cosa's widow received 45,000 maravedís and all the natives he had in his possession as indemnity for services rendered. The fate of de la Cosa's son who should have taken his position as alguazil major of Urabá is unknown.

Did you know?
Juan de la Cosa made the oldest known European map that included the Americas, the "Mappa Mundi" of 1500

Juan de la Cosa made several maps of which the only survivor is the famous map of the world, the Mappa Mundi of 1500. It is the oldest known European cartographic representation of the New World. Of special interest is the outline of Cuba, which Christopher Columbus never believed to be an island. Walkenaer and Alexander von Humboldt were the first to point out the great importance of this chart. It is now in the Museo Naval in Madrid. Reproductions of it were first given by Humboldt in his Atlas géographique et physique. 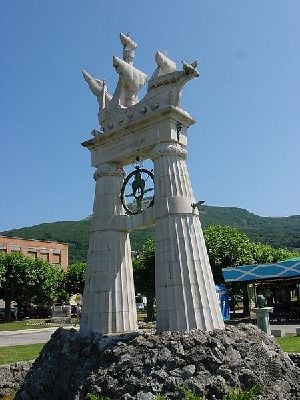 Juan de la Cosa was an important early explorer of the Americas and a cartographer responsible for important maps such as the Mappa Mundi of 1500. De la Cosa traveled with Christopher Columbus and helped to navigate his ship, the Santa Maria, to the Americas. De la Cosa's participation and willingness to utilize his personal property in these travels helped to facilitate in the creation of a greater global human community, as the "discovery" of the Americas introduced divergent and largely separated cultures to one another for the first time. This would help to open up the world to greater markets and increased resources, as well as competing customs and new racial interactions. For these reasons, De la Cosa's efforts had a notable impact on the world as a whole, in both positive and negative lights. He is remembered for this contribution to a greater understanding of global interconnectedness.

Retrieved from https://www.newworldencyclopedia.org/p/index.php?title=Juan_de_la_Cosa&oldid=1098941
Categories:
Hidden category:
This page was last edited on 1 February 2023, at 15:30.
Content is available under Creative Commons Attribution/Share-Alike License; additional terms may apply. See Terms of Use for details.