José Miguel Carrera Verdugo (October 15, 1785 – September 4, 1821) was a Chilean general, considered one of the founders of independent Chile. Carrera was the most important leader of the Chilean War of Independence during the period of the Patria Vieja ("Old Republic"). Carrera rose to prominence in the Chilean independence movement in part due to his ability to garner recognition as a military leader while previously serving for the Spanish Army. His family's monetary and civil assets also contributed to Carrera ability to rise to a leadership role. Carrera was a populist who helped lead Chile in its first ever military coup in 1811, albeit one that lasted only briefly.[1] After the Spanish Reconquista ("Reconquest"), he continued campaigning from exile.

Eventually, he was executed in Mendoza, by the military of the United Provinces of South America (River Plate). His part in the early years of South American rebellion against foreign Spanish rule is noteworthy. It is the work of Carrera and other liberators that would help to bring a more diverse national representation to the world's countries as a whole. In a global community formerly dominated by European rule, the efforts of Carrera and other leaders who pushed for the full independence of Latin American nations from the control of distant Spanish powers would help to open up the world to a more representative and diverse human community.

He was born in Santiago, the oldest son (second child, after his sister, Javiera) of Ignacio de la Carrera y Cuevas and Francisca de Paula Verdugo Fernández de Valdivieso y Herrera. Carrera carried out his first studies in the Convictorio Carolino, the best school in the country at the time. During these years, he became friends with Manuel Rodríguez, classmate and neighbor, future guerrilla leader of the Chilean independence movement.

After school he was sent to Spain by his parents. There he joined the Spanish Army in 1808. He fought well against the Napoleonic forces, obtaining the rank of Sergeant Major and receiving the command of the Húsares de Galicia regiment.

In Spain he also made contact with the United States independence movement and joined the Cádiz Order.

When he learned about the Junta de Gobierno that had been established in Chile to rule during the absence of the Spanish monarch, he went back to Chile and got involved in politics. As the Carreras were one of the three major political forces, he became part of the government. On November 15, 1811, the Carreras made a coup d'état and José Miguel became the sole ruler of Chile. (His brothers were military commanders.) Because of his more personal and Chilean-national point of view about Chilean independence, Carrera came into conflict with the Lautaro Lodge, whose more Latin-Americanist centered objective was to unite all Latin America in the same way as the United States of America.

During his government, and influenced by Joel Roberts Poinsett, first United States envoy to Chile, he helped create several Chilean national symbols and institutions: Carrera created the first Chilean Constitution, made the first Chilean flag and coat of arms, and promoted the press by bringing to Chile the first printing press, which directly led to the appearance of the first newspaper in Chile (La Aurora de Chile). Carrera also established September 18 as the national day (which is still celebrated in Chile).

As the Spanish Army and Navy invaded the South of Chile, he became Commander in Chief of the patriotic forces and left the government. He had a successful campaign, expelling the Spaniards from the city of Concepción.

After the Surprise of El Roble, in which Carrera was surrounded and had to jump into a river to save himself (not without first shooting straight at the enemy's head of commander), the government relieved him of his duties and appointed Brigadier Bernardo O'Higgins, who had managed to repel the enemy incursion. Carrera was taken prisoner by the Spaniards but managed to escape, and went on to overthrow the government for the third time.

Bernardo O'Higgins did not acknowledge Carrera and fought against the Carrerian army at the Battle of Tres Acequias. (Carrera's youngest brother, Luis Carrera, defeated O'Higgins using a cunning defensive strategy.) During this chaos, the Spanish army retook Concepción and advanced towards Santiago. Carrera and O'Higgins decided to re-unite the army; Carrera's plan was to draw the Spaniards to the Angostura de Paine, while O'Higgins wanted to make his stand at Rancagua. It was settled to make it at the Angostura de Paine, a gorge, which seemed to be the most logical plan considering that the local forces were outnumbered, but at the last hour, O'Higgins garrisoned the Chilean forces at Rancagua, and after an entire day of fighting, the Spanish commandader Mariano Osorio was victorious in the Disaster of Rancagua, (October 1-2, 1814).

Argentina and the United States 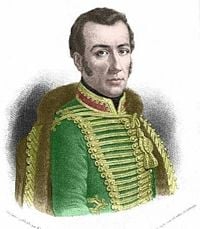 With the defeat of the Chilean forces, many patriots escaped to Mendoza, which was governed at the time by José de San Martín. As San Martín was a member of the Lautaro Lodge, he welcomed O'Higgins and his allies. José Miguel and his brothers were forced to travel to Buenos Aires, where Carlos Maria Alvear, a friend of Carrera since the war against Napoleon in Spain, had just been proclaimed national hero. Alvear would shortly go on to take power in Argentina.

While Alvear was in government, Carrera was in a good position in Buenos Aires. But after Alvear was overthrown, power was taken by members of the Lautaro Lodge. Carrera sailed to the United States, and with the help of Commodore David Porter, obtained on credit five ships with crew for the Chilean independence enterprise.

However, as he arrived in Buenos Aires, the Argentine government confiscated the fleet and put Carrera in prison. During his imprisonment, San Martín organized an army in Mendoza, made up of mainly African slaves and Argentine and Chilean soldiers, who crossed the Andes and defeated the Spaniards in the Battle of Chacabuco on February 12, 1817.

Carrera received help from the United States' envoy that came with him and was able to escape, taking refuge in Montevideo under the protection of General Carlos Federico Lecor. While in Montevideo, his brothers plotted against O'Higgins and were arrested in Mendoza and executed by the command of Bernardo de Monteagudo after the patriot defeat at the Second Battle of Cancha Rayada. The Lautaro Lodge had already made plans that, in case of defeat, all political enemies would be executed. After Carrera was informed of this, he decided to write a newspaper against the Argentine government. However, Carrera is not recognized in Argentine history.

As a result of this treaty, Carrera received troops, with which he marched towards to Chile. However, he was intercepted in Mendoza and taken prisoner. After being put on trial, he was executed on September 4, 1821.

Carrera is today considered one of the Padres de la Patria (Fathers of the Nation). His efforts to lead a fledlging country characterized by political divisions would encourage him to resort to authoritarian rule, which in effect both sped up the independence movement and helped to form rifts amongst its supporters.[2]

The dispute that would develop between Carrera and O'Higgins was of particular significance in the greater overall scope of Chilean history. The feud itself would help lead to Spain's ability to reclaim Chile for itself in 1814. After regrouping with family in Argentina, Carrera would continue to push for full Chilean independence. His rift with O'Higgins would however ultimately lead him and his brothers to a young death. The conflict between followers of O'Higgins and Carrera continues to some extent to this day, when many declare themselves Carrerists or O'Higginists. Carrerists claim that his figure is not given enough recognition, in comparison with O'Higgins.[2]

Carrera's contributions to the world community are noteworthy in themselves. He is considered the most important figure in the movement for full Chilean independence. He and other leaders who would strive for the liberation of local South American nations would help to form a new global landscape that included more diverse and numerous nations than simply those large, few European nations that had previously controlled much of the hemisphere. More ideas and people were represented in this new schemata and thus a more open human community would be forged as a direct result. For this, the contribution of Carrera and others like him should not be forgotten. Clearly, he was a highly significant figure who impacted both Chilean and world history overall.

In the Patagonian region there is the General Carrera Lake. One of his other legacies, the oldest high school in Chile, also has his name: Instituto Nacional General José Miguel Carrera.

His grandson, Ignacio Carrera Pinto, died during the Battle of La Concepción, in the War of the Pacific.

Retrieved from https://www.newworldencyclopedia.org/p/index.php?title=José_Miguel_Carrera&oldid=1012206
Categories:
Hidden category:
This page was last edited on 11 June 2018, at 21:37.
Content is available under Creative Commons Attribution/Share-Alike License; additional terms may apply. See Terms of Use for details.