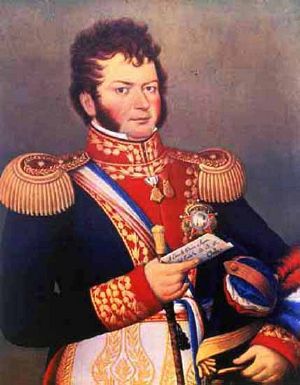 Bernardo O'Higgins Riquelme (August 20, 1778 - October 24, 1842), South American independence leader, was one of the commanders—together with José de San Martín—of the military forces that freed Chile from Spanish rule in the Chilean War of Independence. He is known as the "liberator of Chile." Other men had held the title of Supreme Director of Chile, but O'Higgins was the first who headed a fully independent Chilean state. His father had served as Governor of Chile and as Viceroy of Peru. Bernardo attended school in London, England. Returning to Chile, he joined the independence movement in 1810. After an initial defeat in 1814, he achieved victory at the Battle of Chacabuco in 1817, and was soon leader of the new nation of Chile. He was granted dictatorial powers with the title Supreme Director on February 16, 1817. He remained in office until 1823, when conservatives resisting his policies of democratization ousted him from power. Despite his wide-ranging powers, he was a convinced democrat. He abolished noble ranks and he sent forces to assist Peru's freedom struggle.

Influenced by the ideals of the United States Declaration of Independence, despite his acceptance of dictatorial authority, he wanted to establish a democracy. This, however, challenged the elite, who regarded themselves as natural rulers. Conservative elements favored an authoritarian presidency and removed him from office; the Liberals wanted participatory government. O'Higgins identified with the latter. Despite achieving independence, little changed for the vast majority of the population. The lesson is that without a shared vision of how a just and fair government should be structured, a revolution can sacrifice lives without achieving its goals of freedom, justice and equality. O'Higgins had high hopes, declaring that Chile was to be a refuge for all "people of the globe" who shared the ideal of freedom.

O'Higgins was born in Chile. As noted in his certificate of baptism, he was the illegitimate son of Ambrosio O'Higgins, Marquis of Osorno, a Spanish officer born in County Sligo in Ireland, who became governor of Chile and later viceroy of Peru. His mother was Isabel Riquelme y Meza, a prominent lady of a noble family in Chillán. O'Higgins spent his early years with his mother's family in central-south Chile. He had a distant relationship with his father, who supported him financially and was concerned with his education, but the two never met in person. Spanish government officials in the Americas were forbidden to marry locals.[1]

As Ambrose O'Higgins became Viceroy of Peru, at 15, Bernardo was sent to a Catholic school in London to complete his studies. There, Bernardo became acquainted with American ideas about independence: He knew Venezuelan Francisco de Miranda and joined the Masonic Logia Lautaro. He then lived in Spain for some time. He inherited his father's estates in 1801 and became a gentleman farmer.

Role in the Chilean independence and government

In 1810, he joined the nationalist rebels fighting for independence from Spain. The leaders declared independence on September 10, 1810, establishing a National Council although real power resided in a series of juntas, with three to seven members. Napoleon Bonaparte had placed his brother on the Spanish throne and the colonialists did not recognize this regime. Initially, their aim was to establish a provisional government until the Spanish throne was restored to the deposed Ferdinand VII. O'Higgins, elected as a deputy to the Congress, was among those who wanted full-blown independence. Royalists vied with republicans until José Miguel Carrera assumed dictatorial. Realizing that a militia was needed, O'Higgins formed two brigades consisting of workers from his own estates. After receiving instruction in military tactics, he assumed the rank of colonel. His brigades clashed with royalists in 1313, after which he was named commander-in-chief of the republican army following Carrera, who had been removed from that post. O'Higgins then fought Carrera's supporters, and won.

In 1814, O'Higgins' Chilean rebels were defeated by the Spanish, who outnumbered them, after a 36-hour engagement. He then led his troops in retreat into the Andes. For the next three years, he practiced, trained and drilled his troops. He set up a training camp and spent his evening reading military manuals.[2] In 1817, with the aid of Argentine General José de San Martín he went on the offensive. On February 12, 1817, he led a cavalry charge over the Andes that won the Battle of Chacabuco. This has been compared with Hannibal's crossing of the Alps although the mountains were actually "higher, steeper, were more treacherous than the route taken by Hannibal."[3] Santiago was captured.

With the war won, San Martín was offered the "dictatorship." He declined but indicated that he would be delighted were O'Higgins to be appointed. O'Higgins was then offered and accepted dictatorial powers as Supreme Director on February 16, 1817. On February 12, 1818, Chile was proclaimed an independent republic.

His six-year rule saw the founding of the Military Academy and the approval of the new (and current) Chilean flag. However, his more radical and liberal reforms, (such as the establishment of democracy and abolition of nobility titles) were resisted by the powerful conservative large-land owners. O'Higgins wanted to create a "more homogeneous society, but not one without social classes." He set out to "eliminate some exclusive, aristocratic institutions while raising the cultural level of the common people." To spread learning and culture, he established "National Library," encouraged printing and supported an education system "based on an English model."[4] He also built hospitals, schools, colleges and courts.

He founded the cities of La Unión and Vicuña. From his later exile in Peru, he promoted the Chilean expansion southward, concluding in the foundation of Punta Arenas in 1845. Also, his government was involved in the killing of enemy independence leaders José Miguel Carrera, his brothers Juan José and Luis in Argentina, and Carreras' friend and guerrilla leader Manuel Rodríguez. During his government, he also assisted José de San Martín to organize the Expedition and an Army and Navy to support the Independence of Peru. He also organized the Chilean Army and the first Chilean Navy, under the command of Lord Cochrane and Manuel Blanco Encalada.

His desire to involve the non-elite in governance, however, alienated the aristocrats. He also alienated the Catholic Church because he refused to suppress Protestantism. Relying on his command of the army, he sometimes forced changes which lacked popular support. In 1823, having had to relinquish command of the army, he was forced to abdicate by a conservative coup on January 28, 1823.[5] Technically, the state was a representative democracy but due to property owning rules, very few people could actually vote. Consequently, the elite dominated the Congress and once in power could rule as autocratically as they wished. Those who had appointed him "dictator" wanted a strong Presidency. O'Higgins accepted the title because it was what was on offer but his own intent was to democratize Chile.

After his abdication, O'Higgins spent the rest of his life in exile, and died in Lima, Peru, in 1842. He had just received permission to return to Chile when illness intervened. Shortly after reaching Peru, he met Simon Bolivar and asked to join his army. Bolivar honored him with a banquet but only gave him non-combatant roles, such as Court-Martial Judge, so he returned to Lima.[6] He returned to farming.

His remains were repatriated to Chile in 1869; moved in 1979 from the Military School to a place of honor in the Altar de la Patria's mausoleum in front of the Palacio de La Moneda government palace; and then back again temporarily to the Military School, in 2004, for a year, during transformation of the Altar de la Patria (shrine to the Fatherland} into the new Plaza de la Ciudadanía (Citizens' Square). The Chilean village of Villa O'Higgins was named in his honor. The main thoroughfare of the Chilean capital, Santiago, is Avenida Libertador General Bernardo O'Higgins. Every Chilean officer promoted to General is given a "replica of O'Higgins's battle sword." Augusto Pinochet, after seizing power in 1973, had moved O'Higgins' remains to the Shrine, which was under military guard, not open to the public. This Shrine was transferred to civilian control March 10, 2006. At a ceremony marking the occasion, President Ricardo Lagos said that by repatriating the shrine to the people, Chile was "re-encountering" its "democratic values and traditions." Historian Francisco Estévez Valencia says that Pinochet "was always in search of historical elements that could help bestow some sort of legitimacy on him …So he symbolically kidnapped O'Higgins, who was not a tyrant but a progressive for his time." "Only now," he added, "are Chileans being allowed to re-encounter O'Higgins as he really was." Pinochet even "gave himself a title, captain general, that had been awarded to O'Higgins and then, out of respect, was never used again."[7]

There is a statue of O'Higgins in Richmond, in south-west London in a square named after him, O'Higgins Square. A blue plaque was erected in his honor at Clarence House in Richmond, where he lived while studying in London. There is also a plaque in his honor in Merrion Square in Dublin and in the Garavogue River Walkway in Sligo, Ireland, and a sculpture at Central Railway Station on Elizabeth St in Sydney, Australia.

A plaque has also been erected in Cadiz, Spain, in the Plaza de Candalaria, where he resided for four years.

Harvey describes O'Higgins as a man of "stubborn honesty and courage."[8] Rector describes him as "scrupulously honest and well-intentioned." However, he had "falsely assumed" that he could govern without the support of aristocrats."[5] Open war broke out between the Liberals and the Conservatives within the next decade. Conservatives won and governed from 1830-61. Liberals took power next, ruling until 1891. The tendency towards authoritarianism and long periods in power continued, so Pinochet could speak about "protected" and "authoritarian" democracy (1977).[9] Lack of a consensus about how a liberated Chile would be governed saw colonial repression replaced by that of elite rulers. Little changed for the vast majority of the population. The lesson is that without a shared vision of how a just and fair government should be structured, a revolution can shed blood and sacrifice lives without actually achieving its goals of freedom, justice and equality. O'Higgins had high hopes, declaring that Chile was to be a refuge for all "people of the globe" who shared the ideal of freedom.[10] United States Senator Edward Kennedy, receiving Chile's highest civilian honor, said:

Bernardo O’Higgins is an inspiration to the Chilean people and to all who know of him. His leadership in the Chilean Congress, as a military leader, a diplomat, and as a builder of democratic institutions changed the course of history in his nation.[11]