Ilaiyaraaja ▶ (Tamil: இளையராஜா, IPA: [ɪləjəɹɑːdʒɑː]) (born June 2, 1943 as Gnanadesikan), an Indian film composer, singer, and lyricist, has composed over 4000 songs and provided background music for more than 800 Indian films in various languages in a career spanning 30 years.[1][2] He lives and works in Chennai, India. Married, his family consists of his wife Jeeva and their three children. Their two sons, (Karthik Raja and Yuvan Shankar Raja), and daughter (Bhavatharini) work as film composers and singers.[3]

Ilaiyaraaja had been the most prominent composer of film music in South Indian cinema during the late 1970s, 1980s and early 1990s.[4] His work integrated Tamil folk lyricism and introduced broader Western musical sensibilities into the South Indian musical mainstream. He has thrice won the Indian National Film Award for best film scoring. The source of his monumental appeal to the Indian people has been his ability to infuse the variety of India's religious and cultural traditions to express the heart of India.

Ilaiyaraaja, born into a poor rural family in Pannaipuram, Theni district, Tamil Nadu, India, as the third son of Ramaswamy and Chinnathayammal. Growing up in a farming area, Ilaiyaraaja enjoyed Tamil folk music,[5] such as the songs sung by farmers working in the fields. His formative contact with music-making and performance came at the age of 14, when he joined a traveling musical troupe headed by his elder step-brother, Pavalar Varadarajan, a propaganda musician for the Communist Party of India.[6][7] He journeyed through numerous villages, towns and cities in South India with his brothers for about ten years as one of the musical Pavalar Brothers. He first tried his hand at composing music during that period: he set to music an elegy written by the Tamil poet laureate Kannadasan for Jawaharlal Nehru, India's first prime minister.[8]

Arriving in Madras (now Chennai) in 1968, Ilaiyaraaja enrolled under the tutelage of Dhanraj, a music teacher, as he became aware of the importance of learning music skills such as musical notation for a successful professional music career. He encountered Western classical music during his training, and the music and compositional styles of Bach, Beethoven, Mozart, and Schubert, among others, proved influential in creating a motif in much of Ilaiyaraaja's compositions (such as the use of counterpoint). Ilaiyaraaja's classical music training culminated in his completing a course with a gold medal in classical guitar (higher local) with the Trinity College of Music, London.[9]

In Chennai, Ilaiyaraaja worked in a band for hire involved in performing music for various stage shows and formal occasions. Ilaiyaraaja also worked as a session guitarist and keyboardist/organist for film music composers and directors such as Salil Chowdhury from West Bengal, who often recorded music in Madras.[10][11][12] Later, the Kannada film composer G. K. Venkatesh hired him as an assistant, an event that marked his entry into film music composition and directing. He assisted that music director in 200 film projects, mostly in Kannada.[13] During that stint, he learned the practical methods of orchestration, and would hone his compositional ability through frequent experimentation accomplished by persuading session musicians to play, during their break times, the scores that he wrote.[14]

Ilaiyaraaja's break as a full-fledged composer came in 1976, when film producer Panchu Arunachalam decided to commission him to compose the songs and film score for a Tamil-language film called Annakkili ('The Parrot'). The resulting soundtrack, together with others that quickly followed, earned Ilaiyaraaja recognition for his adaptation of Tamil folk poetry and music to popular film music orchestration.[15][16] Ilaiyaraaja helped reinvigorate Tamil film music which, by the mid-1970s, experienced a lack of creative ideas.[17] As demand mounted for his 'new' sound, Ilaiyaraaja emerged by the mid-1980s as the leading film composer and music director in the South Indian film industry.[18] Besides Tamil, Telugu, Malayalam and Kannada films, he has scored music for Hindi (or Bollywood) film productions such as Sadma (1983), Lajja (2001) and Cheeni Kum (2007). He has worked with noted Indian poets and lyricists such as Gulzar, Kannadasan, Vairamuthu and T. S. Rangarajan (Vaali),[19] and film directors such as K. Balachander, K. Vishwanath, Singeetham Srinivasa Rao and Mani Ratnam.

Ilaiyaraaja and musicians during a recording session

Ilaiyaraaja's arrival onto the scene of film music composition in South India broke some new ground in the industry including increased efficiency in the film scoring process and a greater centralization of expressive control in the hands of a musical director.[20][21] The Indian filmmaker Mani Ratnam illustrates:

"Ilayaraja would look at the [film] scene once, and immediately start giving notes to his assistants, as a bunch of musicians, hovering around him, would collect the notes for their instrument and go to their places. When the orchestra played out the notes, they would be perfect, not just in harmony but also in timing—the background score would commence exactly where it should and end at the exact place required…. A [film] director can be taken by surprise at the speed of events."[22]

Ilaiyaraaja became the first film composer to extensively employ within the Indian film music framework the harmonies and string arrangements intrinsic to Western classical music.[23] That allowed him to craft a rich tapestry of sounds for films, and his themes and background score gained notice and appreciation amongst Indian film audiences.[24] Ilaiyaraaja's methodical approach to arranging, recording technique, and his drawing of ideas from a diversity of musical styles broadened the range of expressive possibilities in Indian film music.[25] According to musicologist P. Greene, Ilaiyaraaja's "deep understanding of so many different styles of music allowed him to create syncretic pieces of music combining very different musical idioms in unified, coherent musical statements".[26] Ilaiyaraaja has composed Indian film songs that amalgamated elements of genres such as pop, acoustic guitar-driven Western folk, jazz, rock and roll, disco, funk, doo-wop, march, bossa nova, flamenco, pathos, native folk, Afro-tribal, and Indian classical. By virtue of that variety and his interfusion of Western, Indian folk and Carnatic elements, Ilaiyaraaja's compositions appeal to the Indian rural dweller for its rhythmic folk qualities, the Indian classical music enthusiast for the employment of Carnatic ragas, and the urbanite for its modern, Western-music sound.[27]

The use of an orchestration technique that is a synthesis of Western and Indian instruments and musical modes characterized Ilaiyaraaja's music. He pioneered the use of electronic music technology that integrated synthesisers, electric guitars and keyboards, rhythm boxes and MIDI with large orchestras that also featured the veena, venu, nadaswaram, mridangam, and tabla.[28][29] His flair for catchy melodies, and to his employment of subtle nuances in chord progressions, beats and timbres accounts for the popularity of Ilaiyaraaja's music.[30][31][32] Ilaiyaraaja's songs typically have a musical form where orchestral preludes and interludes layer vocal stanzas and choruses. They often contain polyphonic melodies; the lead vocals interweave with supporting melody lines sung by another voice or played by instruments. Polyrhythms, particularly in songs with Indian folk or Carnatic influences, have prominence. The melodic structure of his songs demand considerable vocal virtuosity, and have found expressive platform among some of India's respected vocalists and playback singers, such as K.J. Yesudas, S.P. Balasubramaniam, S. Janaki, P. Susheela, K.S. Chithra, Malaysia Vasudevan, Asha Bhosle and Lata Mangeshkar.[33] Ilaiyaraaja has sung his own compositions for films,[34] recognizable by his rustic and nasal voice. He has penned the lyrics for some of his songs in Tamil and other languages.[35][36] Ilaiyaraaja has become famous for his evocative film themes and background music,[37] and examples of those include his work for Pallavi Anupallavi (1984), Punnagai Mannan (1986), Mouna Raagam (1986) and Geethanjali (1989).

In Ilaiyaraaja's first two non-film albums, he explored the fusion of Indian and Western classical music. The first, How To Name It? (1986), dedicated to the Carnatic master Tyagaraja and to J. S. Bach, features a fusion of the Carnatic form and ragas with Bach partitas and fugues and Baroque musical textures.[38] The second, Nothing But Wind (1988), performed by flautist Hariprasad Chaurasia and a 50-piece orchestra, takes the conceptual approach suggested in the title—that music constitutes a natural phenomenon akin to various forms of air currents (e.g., the wind, breeze, tempest, etc.) He has also composed a set of Carnatic kritis, recorded by electric mandolinist U. Srinivas for the album Ilayaraaja's Classicals on the Mandolin (1994). Ilaiyaraaja has also composed albums of religious/devotional songs. His Guru Ramana Geetam (2004) consists of a cycle of prayer songs inspired by the Hindu mystic Ramana Maharishi, and his Thiruvasakam in Symphony (2005), an oratorio of ancient Tamil poems transcribed partially in English by American lyricist Stephen Schwartz, had been performed by the Budapest Symphony Orchestra.[39][40] Most recently, Ilaiyaraaja's released a world music-oriented album called The Music Messiah (2006).[41] 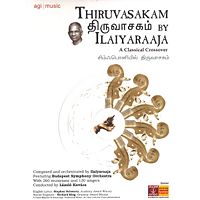 The cover of the Ilaiyaraaja album Thiruvasakam in Symphony (2005)

Ilaiyaraaja's composition Rakkama Kaiya Thattu from the movie Thalapathi (1991) made the BBC "World Top Ten" music poll in 2002. He composed the music for Nayakan (1987), an Indian film ranked in 2005 by TIME Magazine as one of the all-time 100 best movies. Ilaiyaraaja has composed music for events such as the 1996 Miss World beauty pageant held in Bangalore, India, and for a documentary called India 24 Hours (1996).[42]

Ilaiyaraaja rarely performs his music live due to heavy commitments to composing. In his last major live performance, the first in 25 years, he performed a four-hour concert held at the Jawaharlal Nehru Indoor Stadium in Chennai, India on October 16, 2005. The show had been widely televised both in India and abroad. Less well-known, he performed live in Italy at the Teatro Comunale di Modena, an event-concert presented for the 14th edition of Angelica, Festival Internazionale Di Musica, co-produced with the L'Altro Suono Festival. He had done a few small-scale shows early in his career in Sri Lanka and Malaysia and performed in a charity concert to raise funds for the construction of a Hindu temple in India. A television retrospective titled Ithu Ilaiyaraja ('This is Ilaiyaraja') chronicled his career.[43]

Tamil Nadu Chief Minister M. Karunanidhi conferred on him the title Isaignani ('savant of music') in 1988, and the Government of the State of Tamil Nadu, India presented him with the Kalaimamani Award, an annual award for excellence in the field of arts.[44] He also received State Government Awards from the governments of Kerala (1995), Andhra Pradesh and Madhya Pradesh (The Lata Mangeshkar Award) (1998) for excellence in music.

He received honorary doctorates from Annamalai University, Tamil Nadu, India (Degree of Doctor of Letter (Honoris causa)) (March, 1994), the World University Round Table, Arizona, U.S.A. (Cultural Doctorate in Philosophy of Music) (April, 1994), and Madurai Kamarajar University, Tamil Nadu (Degree of Doctor of Letters) (1996). He received an Award of Appreciation from the Foundation and Federation of Tamil Sangams of North America (1994), and later that year Mr. John Abraham, Mayor of Teaneck, New Jersey, presented him with an honorary citizenship and key to the Teaneck township.

Retrieved from https://www.newworldencyclopedia.org/p/index.php?title=Ilaiyaraaja&oldid=1009354
Categories:
This page was last edited on 25 February 2018, at 21:11.
Content is available under Creative Commons Attribution/Share-Alike License; additional terms may apply. See Terms of Use for details.