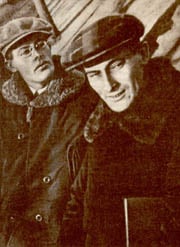 Ilya Ilf (Ilya Arnoldovich Faynzilberg (Russian: Илья Арнольдович Файнзильберг) (1897–1937) and Evgeny or Yevgeny Petrov (Yevgeniy Petrovich Kataev or Katayev (Russian: Евгений Петрович Катаев), 1903–1942) were two Soviet prose authors of the 1920s and 1930s. They did much of their writing together, and are almost always referred to as "Ilf and Petrov." They became extremely popular for the two their satirical novels: The Twelve Chairs and its sequel, The Little Golden Calf. The two texts are connected by their main character, a greedy con man named Ostap Bender who is in pursuit of elusive riches.

Both books follow exploits of Bender and his associates looking for treasure amid contemporaneous Soviet reality. They were written and are set in the relatively liberal era in Soviet history, the New Economic Policy of the 1920s, prior to the institution of Socialist realism as the dominant literary dogma.

Ilf and Petrov use satire to poke holes in the pretentions of the new Soviet state to reform human nature and create the "New Soviet Man."

Ilya Ilf (pseudonym of Ilya Arnoldovich Fainzilberg) came from a Jewish family in Odessa. He was born in 1897, into the family of Arnold Fainzilberg, a bank clerk, who wanted his descendants to realize happiness and material bliss in business. His two older sons, Aleksandr and Mikhail, did not follow their father’s commercial ideals, but instead became artists. Ilya, the third son, graduated from a technical school in 1913, but after trying his hand at a number of professions, including working in an architect’s office, aviation plant and hand grenade factory, as a statistician, and a bookkeeper, he, too, became an artist. He became an editor of a humor magazine Sindektikon (in which he published poems under women’s pseudonyms), and a member of an Odessa poets society. Moscow attracted restless Odessan artistic spirits, and Ilya Ilf soon, in 1923, became a journalist for the magazines Gudok (The Whistle) and Moriak, where he published his first works. During his visit to Central Asia, he witnesses a clash between the old customs and the new system, which became one of the central themes of "The Twelve Chairs."

Yevgeny Petrov (younger brother of Valentin Katayev), was also born in Odessa, the son of a history teacher. He graduated in 1920, from a grammar school and started his career as a journalist. In 1921, he became a correspondent for “The Ukrainian Telegraphy.” Before moving to Moscow in 1923, he worked at Odessa Criminal Investigation Department. His very first literary work was published in the form of records, from conducting an investigation regarding the discovery of the body of an unknown man.

I’m leaving for Moscow… There is a revolver in my pocket. I am a very skinny and proud young man. And provincial… September… You can feel the cold… As a southerner, I am not used to it… I am driving through Moscow in a high, dirty coach. I have come with no conquering goals, and I have made no plans.

Petrov was appointed sub-editor of the satirical journal Krasnyi perets (Red Paper), and in 1923, he joined the staff of the newspaper Gudok. Originally, Petrov had no ambitions to become a writer. However, his older brother, the novelist Valentin Katayev (1897-1986), encouraged him to compose short stories, a small collection of which was published in 1924. Petrov married in 1929. From 1932, he contributed to both Pravda (Truth) and Krokodil (The Crocodile). In 1925, Petrov met Ilf, who also worked for Gudok.

Ilya Fainzilberg formed his pseudonym by putting together the two first letters of his name and the first letter of his last name. The younger half of the author team also took a pseudonym. Since there were already two talented writers named Katayev—Yevgeny’s older brother Valentin, and popular journalist, Ivan Katayev,—Yevgeny created a pseudonym from to his father’s name Peter.

Sometime in the summer of 1927, Valentin Katayev suggested to Ilf and Petrov (who, by that time, had known each other for two years as associates in the magazine Gudok), to start a “creative combine,” for which he would serve as a kind of a Dumas-like father. According to Katayev, Ilya and Yevgeny would write a humoristic novel together, and he would polish it, and give his blessing for printing. On that occasion, Katayev told the two humorists of an idea for a novel about some missing chairs, and the adventures of people in search of them. After discussing it with Katayev, the two writers immediately started writing a novel with the unusual idea.

This moment saw the birth of Soviet humorist team and a novel that would be published later that year and bring its authors worldwide recognition.

There were many hairdressing establishments and funeral homes in the regional center of N….

This was just the beginning of a very amusing sentence about many hairdressing establishments and funeral homes in the regional center N., where, as it appeared, “people were born merely in order to have a shave, get their hair cut, freshen up their heads with toilet water, and then die.”

Ilf and Petrov returned from the United States of America richened with experience, and a substantial material which was soon shaped into the book Little Golden America (1936) and the short story “Tonya” (1937). But, during their stay in America, Ilf became seriously ill. Ilya’s otherwise fragile health lost what little resistance it had during a rather tiring two-month trip across the country, in a gray Ford. One evening, in New Orleans, Ilf complained to Petrov about coughing up blood. Ilf had developed tuberculosis. On the thirteenth of April 1937, fifteen months after that conversation in New Orleans, Ilya Ilf died.

After Ilf’s death, it was very hard for Petrov to adjust. For the rest of his life, Yevgeny couldn’t get over that irreparable loss.

Petrov thought of it as his obligation, as for the memory of Ilf, so for the readers, to write an extensive book on Ilya. However, the book My friend Ilf, was never realized.

In the period from Ilf’s death, up until Hitler’s invasion of the Soviet Union in Operation Barbarossa, Petrov wrote four film scripts: The Air Coachman, A Musical Event, Anton Ivanovich is Fuming, and A Restless Character. While he wrote the first script independently, the other three resulted from his collaboration with the author Gregory Munblit. All the scripts, except the last one, were filmed. Petrov also expressed himself in drama. In 1940, under the influence of the events in France of that period, and the bombing of England, he wrote a satirical novel The Island of Peace. In 1941, the war subject completely took over his work. He became a war correspondent. From the very beginning of Hitler’s invasion, Yevgeny visited the front, crossing thousands of miles under difficult conditions, very often, exposing himself to the same peril as the fighters. His heart was not in perfect health, but he worked tirelessly. Petrov’s newspaper stories, “Moscow is behind us,” “The Commandant and the Commissar,” “Birds of Mayor Zacayev,” “Katya,” and many others dating from that period make an impressive war journal.

In the latter part of June 1942, Petrov flew to Sevastopol, Crimea, which was under the siege of the Nazi army. He died on July 2, 1942, on his way back from Sevastopol.

Ilf and Petrov's main contribution to literature was their two satirical novels, The Twelve Chairs and The Little Golden Calf—in particular, their literary creation, Ostap Bender.

The main characters generally avoid contact with the apparently lax law enforcement. Their position outside the organized, goal-driven, productive Soviet society is emphasized. It also gives the authors a convenient platform from which to look at this society and to make fun of its less attractive and less Socialist aspects. These are among the most widely read and quoted books in Russian culture. The Twelve Chairs was adapted for popular films both in the USSR and in the U.S. (by Mel Brooks in the latter).

The two writers also traveled across the Depression-era United States. Ilf took many pictures throughout the journey, and the authors produced a photo essay entitled "American Photographs," published in Ogonyok magazine. Shortly after that, they published the book Одноэтажная Америка; literally: One-Storied America, translated as Little Golden America (an allusion to The Little Golden Calf). The first edition of the book did not include Ilf's photographs. Both the photo essay and the book document their adventures with their characteristic humor and playfulness. Notably, Ilf and Petrov were not afraid to praise many aspects of the American lifestyle in these works.

Ilf died of tuberculosis shortly after the trip to America; Petrov died in a plane crash in 1942, while he was covering the Great Patriotic War.

The Twelve Chairs received a well-deserved acclaim abroad, but the Soviet critics remained silent. Ilf and Petrov were considered light humorists, who deserve to have their work published only in humor magazines, or even as unwanted “destroyers of the system.” Years of domination of the writers’ organization RAPP put a stamp on the fate of satire. Ilf and Petrov were, naturally, affected. Thanks to Maxim Gorky’s intervention, The Little Golden Calf was approved for printing. Otherwise, it would have never been published. Of all the literary works they published subsequently, only One-Storied America aka Little Golden America, in 1936, received recognition. The novel, which criticized American capitalistic nature, fought against race discrimination and took a stand for a fairer status of the black and the poor, won the approval of Soviet critics. The series of stories and feuilletons How Robinson Was Created and A Rejoiceful Individual, didn’t appeal to the critics. The scripts and the comedies of the two writers weren’t spared either. Under the Circus Tent suffered many alterations until it was finally realized in the film The Circus. Once During the Summer (1932) suffered the same fate, and the comedy The Rich Bride (1936) was never performed.

During those years, dark clouds appeared in the sky of the Soviet literature. Except in the paper Pravda, which, among other things, ensured them two great trips abroad (to Europe 1933-1934, and to America 1935-1936), the two writers came across numerous obstacles almost everywhere.

At the moment of Ilf’s death, the fate of the Soviet satire was already sealed. Later works of Yevgeny Petrov show that in the years that followed only satire against capitalism and fascism was allowed. In the forties, Stalin’s politics ended Ilf and Petrov’s situation during RAPP. Attacks and lack of understanding were replaced by not being published at all. They were not written about, nor spoken of. Only after Stalin’s death did the studying of literary works of these prominent humorists started again. Today, they rightfully occupy a prominent position, and are well-known all over the world.

Retrieved from https://www.newworldencyclopedia.org/p/index.php?title=Ilf_and_Petrov&oldid=1009355
Categories:
Hidden category:
This page was last edited on 25 February 2018, at 21:13.
Content is available under Creative Commons Attribution/Share-Alike License; additional terms may apply. See Terms of Use for details.