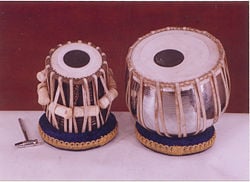 A typical set of tabla

The tabla (Urdu: تبلہ, Hindi: तबला, tubblaa) (or pronounced "Thabla" in Malayalam) is a popular Indian percussion instrument used in the classical, popular and religious music of the Indian subcontinent and in Hindustani classical music. The instrument consists of a pair of hand drums of contrasting sizes and timbres. The term tabla is derived from an Arabic word which means "drum."

The history of this instrument is at times the subject of heated debate. The most common historical account credits the thirteenth-century Indian poet Amir Khusrau as having invented the instrument, by splitting a Pakhawaj into two parts. However, none of his own writings on music mention the drum (nor the string instrument, sitar). Another common historical narrative portrays the tabla as being thousands of years old, yet this is mere conjecture, based on sometimes careless interpretations of iconography. Reliable historical evidence places the invention of this instrument in the eighteenth century, and the first verifiable player of this drum was Ustad Siddar Khan of Delhi.

The transformation of the tabla from a religious-folk instrument to a more sophisticated instrument of art-music occurred in the late eighteenth or early nineteenth centuries, when significant changes took place in the feudal court music of North India. Although largely denied by most popular histories of this instrument, the tabla was played by hereditary groups (i.e. castes) of musicians who were ascribed low social status by the greater society. The majority of the performers were Muslim and resided in or near the centers of Mughal power and culture such as Delhi, Lucknow, Allahabad, Hyderabad, and Lahore. However, one notable group of Hindu hereditary musicians was located in the holy city of Varanasi.

In public performances, tabla players were primarily accompanists to vocalists and instrumentalists; however, they developed a sophisticated solo repertoire that they performed in their own musical gatherings. It is this solo repertoire along with student-teacher lineages that are the defining socio-cultural elements of tabla tradition known by the Urdu-Hindi term gharānā (ghar = "house" Hindi, -ānā = "of the" Persian).

Most performers and scholars recognize two styles of gharana: Dilli Baj and Purbi Baj. Dilli (or Delhi) baj comes from the style that developed in Delhi, and Purbi (meaning “eastern”) baj developed in the area east of Delhi. They then recognize six gharānās of tabla. They appeared or evolved in the following order, presumably:

Other tabla performers have identified further derivations of the above traditions, but these are subjective claims, largely motivated by self-promotion. Some traditions indeed have sub-lineages and sub-styles that meet the criteria to warrant a separate gharānā name, but such sociomusical identities have not taken hold in the public discourse of Hindustani art music, such as the Qasur lineage of tabla players of the Punjab region.

Each gharānā is traditionally set apart from the others by unique aspects of the compositional and playing styles of its exponents. For instance, some gharānās have different tabla positioning and 'bol' techniques. 'Bol's are mnemonic syllables for remembering various parts of a composition and they consist of the variations of drum strokes for the tabla. In the days of court patronage the preservation of these distinctions was important in order to maintain the prestige of the sponsoring court. Gharānā secrets were closely guarded and often only passed along family lines. Being born into or marrying into a lineage holding family was often the only way to gain access to this knowledge.

Today many of these gharānā distinctions have been blurred as information has been more freely shared and newer generations of players have learned and combined aspects from multiple gharānās to form their own styles. There is much debate as to whether the concept of gharānā even still applies to modern players. Some think the era of gharānā has effectively come to an end as the unique aspects of each gharānā have been mostly lost through the mixing of styles and the socio-economic difficulties of maintaining lineage purity through rigorous training.

Nonetheless the greatness of each gharānā can still be observed through study of its traditional material and, when accessible, recordings of its great players. The current generation of traditionally-trained masters still holds vast amounts of traditional compositional knowledge and expertise.

This body of compositional knowledge and the intricate theoretical basis which informs it is still actively being transmitted from teacher to student all over the world. In addition to the instrument itself, the term "tabla" is often used in reference to this knowledge and the process of its transmission.

Spritual Aspects of the Tabla

Indian musical heritage derives from the Vedic hymns, which were performed in the Hindu temples more than two hundred years ago. From the hymnal and raga backgrounds, we find that the background of Indian music is spiritual. In regards to the tabla, it is capable of producing two important sounds according to the Vedic scriptures, which is spiritual sound through vibration, and spiritual sound through striking an object.

The tabla exemplifies these two teachings. When the tabla's membrane is felt, either before or after a performance, its vibrations speak of the celestial realms that music is derived from. When the tabla's membrane is struck, its sound exemplifies the earthly realms in which music is a part of. Thus, through the teachings of the Vedic hymns, music becomes the spiritual discipline which will beget an important self-realization. According to the Nada Brahma, "By this process, an individual's consciousness can be elevated to a realm of awareness where the revelation of the true meaning of the universe—its eternal and unchanging essence—can be joyfully experienced."

The smaller drum, played with the dominant hand, is called dāyāñ (literally "right"; a.k.a. dāhina, siddha, chattū) and can also be referred to individually as "tabla." It is made from a conical piece of wood hollowed out to approximately half of its total depth. One of the primary tones on the drum is tuned to a specific note, and thus contributes to and complements the melody. The tuning range is limited although different dāyāñ-s are produced in different sizes, each with a different range. For a given dāyāñ, to achieve harmony with the soloist, it will usually be necessary to tune to either the tonic, dominant or subdominant of the soloist's key.

The larger drum, played with the other hand, is called bāyāñ (lit. "left"; aka. dagga, duggī, dhāmā). The bāyāñ may be made of any of a number of materials. Brass is the most common; copper is expensive, but generally held to be the best, while aluminum and steel are often found in inexpensive models. One sometimes finds wood used, especially in old bāyāñs from the Punjab. Clay is also used, although not favored for durability; these are generally found in the northeast region of Bengal. The bāyāñ has a much deeper bass timbre or tone, much like its distant cousin, the kettle drum.

The playing technique for both drums involves extensive use of the fingers and palms in various configurations to create a wide variety of different types of sounds; these are reflected in the mnemonic syllables or 'bol'. On the bāyāñ, the heel of the hand is also used to apply pressure, or in a sliding motion, so that the pitch is changed during the sound's decay. This "modulating" effect on the bass drum and the wide range of sounds possible on the instrument as a whole are the main characteristics that make the tabla unique among percussion instruments.

Both drum shells are covered with a head (or puri) constructed from goat or cow skin. An outer ring of skin (keenar) is overlaid on the main skin and serves to suppress some of the natural overtones. These two skins are bound together with a complex woven braid that also gives the entire assembly enough strength to be tensioned onto the shell. The completed head construction is affixed to the drum shell with a single continuous piece of cow or camel hide strap laced between the braid of the head assembly and another ring (made from the same strap material) placed on the bottom of the drum. The strap is tensioned to achieve the desired pitch of the drum. Additionally, cylindrical wood blocks, known as ghatta, are inserted between the strap and the shell allowing the tension to be adjusted by their vertical positioning. Fine tuning is achieved by striking vertically on the braided portion of the head using a small hammer.

The skins of both drums also have an inner circle on the drumhead referred to as the syahi (literally "ink"; a.k.a. shāī or gāb). This is constructed using multiple layers of a paste made from cooked rice mixed with a black powder of various origins. The precise construction and shaping of this area (especially on the smaller drum) is responsible for modification of the drum's natural overtones, resulting in the clarity of pitch and variety of tonal possibilities unique to this instrument. The skill required for the proper construction of this area is highly refined and is the main differentiating factor in the quality of a particular instrument.

For stability while playing, each drum is positioned on a toroidal bundle called chutta, consisting of plant fiber or another malleable material wrapped in cloth.