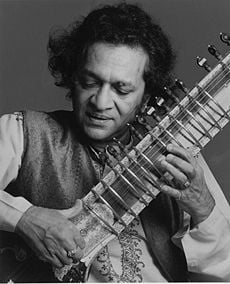 The sitar (Urdu: ستار, Hindi: सितार) is probably the best-known South Asian instrument in the West. A Hindustani stringed instrument which was formerly used in classical music, utilizes 'sympathetic strings' along with regular strings and a gourd for a resonating chamber to produce a very distinctive sound. The sitar has been ubiquitous in Hindustani classical music since the Middle Ages. The Beatles' lead guitarist George Harrison was inspired by, and later taught by, sitar player Ravi Shankar. The instrument became popular in the West in the 1960s and 1970s when The Beatles used it in many songs, including Norwegian Wood (This Bird Has Flown), Love You To, Tomorrow Never Knows, Within You Without You, and Across the Universe.

The name sitar comes from the Persian language سی‌تار sehtar; سیہ seh meaning three and تار tar means string. A similar instrument, the 'setar', is used to this day in Iran and Afghanistan, and the original Persian name is still used. Both instruments are most likely derived from the Turkish tanbûr, which is a long, lute-like instrument with no gourd resonating chamber. Both the tembûr and sehtar were used in pre-Islamic Persia and also used in Turkey today. Alternatively, an older Indian instrument called the rudra veena resembles the sitar in some important respects, most notably in the use of gourd resonators. It is possible that the sitar is actually derived from this instrument, or that the modern sitar is an amalgamation of the two. Dr. Lalmani Misra in his book, Bharatiya Sangeet Vadya traced the sitar to [1]which came to be popularly known as a Jantra during the medieval period.

An etching of an Indian man playing a sitar, 18th century

A distinctive feature of the sitar are the curved frets, which are movable (allowing fine variation in tuning) and raised (so that resonating strings, or sympathetic strings run underneath the frets, giving a very lush sound). A typical sitar has 18, 19 or 20 strings (depending on the style)—of which six (in the Vilayat Khan style) or seven (in the Ravi Shankar style) are playable strings, which are situated over the frets. Three of these strings (called drones or chikari) provide the drone, and the rest are used to play the melody, though most of the notes of the melody are played on the first string (called the baj tar). The sitar also has 11, 12 or 13 sympathetic strings or tarbs (A.K.A. "tarif" or "tarifdar") running underneath the frets.

The instrument has two bridges; the main bridge (the bada goraj) for the playing and drone strings and a smaller, secondary bridge (the chota goraj) for the sympathetic strings that run beneath the main strings. The sitar may or may not have a secondary resonator called the tumba, near the top of its hollow neck. The sitar's distinctive sound is a result of the way the strings interact with the wide, sloping bridge. This is in contrast to the bridge on a guitar which resembles a knife edge. In a sitar, as a string vibrates, its length changes slightly as its edge touches the bridge, promoting the creation of 'overtones' and giving the sound its distinctive, rich tone. The maintenance of this specific tone by shaping the bridge is called "jivari." Adjusting the jawari requires great skill. Many professional musicians will rely on professional instrument makers to perform this task. For years, the musician Ravi Shankar toured the West accompanied by his sitar maker so that the tone of his sitar was always perfectly adjusted. Many professional sitarists also travel with two bridges-one for daily practising, and a fine-tuned one for performing.

The materials used in construction include teak wood or tun wood (Cedrela tuna) for the neck and faceplate, and gourds for the kaddu (the main resonating chamber) and the aforementioned tumba. The instrument's bridges were formerly made of ivory, but today are made of camel bone or horn.

The tuning of a sitar varies depending on the sitarists' school or style. Generally, the main playing string is tuned to C# or D, and the drone strings are tuned to the equivalent of an open major or minor chord in Western music theory. The specific tuning for each raga is determined by tradition and each artist's personal preference. The sympathetic strings are tuned to the notes of the 'raga' being played, although there is a slight stylistic variance as to the order of these. The player will usually retune the sitar for each raga.

The strings are tuned by turning the tuning pegs that hold the strings. The main playing strings are fine-tuned by sliding a bead fit around each string.

It may be rather difficult to tune a sitar. Not only is it because of the numerous strings (a typical electric guitar only has six strings) or the lack of machine headed geared mechanical tuners (sitar tuning pegs are wood cylinders that are chalked and tightened into a hole like traditional western classical music instruments such as the cello), but also because there are many different tunings, each based on the cadre of traditional and emerging tonal patterns or on the music of eminently influential sitar players.

In one or more of the more common tunings (used by Ravi Shankar among others) the strings are tuned in this fashion: The Chikari, Sa (high) Sa (middle) Pa. The Kharaj strings (bass strings) Sa (low) Pa. Then, Sa and Ma. When playing a Vilayat Khan Sitar (or "Gayaki" Sitar), the bass strings are removed and in their place is a fourth Chikari which is tuned to Ga. When playing the chikari, you produce a chord (Sa, Sa, Pa, Ga). The sympathetic strings (tarif) are tuned depending on the 'raga', although for most purposes, they are tuned: Sa, Ni, Sa, Re, Ga, Ma, Pa, Pa, Dha, Ni, Sa, Re, Ga, (last three in the upper range). If you were to tune it to rag Kafi, for example, you use the tune as follows: Sa, ni (lower case denotes a 'flat' or, more properly, "Swara komal" Sa, Re, ga, Ga (Shuddh ("Natural sign"), considering that in Kafi you will come to Shuddh Ga when descending or "Swara Avarohi," ma, Pa, Dha, ni, Sa, Re, ga. Whereas, in ragini Yaman Kaylan you will tune the Tarifs to Sa, Ni, Sa, Re, Ga, ma Yaman Kaylan asks for a 'sharp', or more properly, "Swara tivra" Ma, but often will touch shuddh ma on the descent or "Swara Avarohi"), Ma, Pa, Dha, Ni, Sa, Re, Ga. Again, however, there is a lot of stylistic variance to these tunings. An artist will develop a particular tuning for a particular piece and it may be totally idiosyncratic. There is no guarantee that other musicians will choose the same tuning even if they perform the same raga. 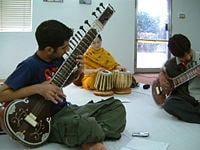 A sitar workshop in Islamabad, Pakistan

Traditional approaches to learning the sitar involve a long period of apprenticeship under the tutelage of a master during which the apprentice would accompany the master with a tambura, providing a droning chord harmony for the sitar's melody. Nowadays it is possible to purchase books and videos to assist home learning.

Learning to play the sitar is a difficult process. The entire three-octave range of the instrument is achieved by sliding the index finger of the left hand up and down the neck of the sitar over a single melody string, while the mezrab on the index finger of the right hand strikes the string. Thus it demands a very high degree of technical mastery to play even simple melodies with clarity and accuracy. It is also a rather painful process for the beginner until the hard calluses and black grooves on the tips of the index and middle finger, which typify the sitar player, begin to develop. A specialized technique called "Meend" involves pulling the main melody string down over the bottom portion of the sitar's curved frets, with which the sitarist can achieve a seven-semitone range of microtonal notes. Meend gives the sitar its characteristic fluid sound, but requires practice to achieve fluency and precision.