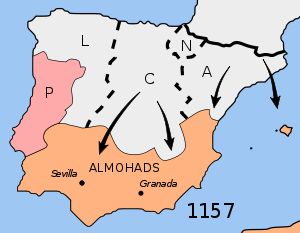 Map showing the area of Almohad control in Spain and the paths of counter-attacks from Castile (C) and Aragón (A). ((L) Leon, (P) Portugal, (N) Navarre).

In 1125, he began open revolt against Almoravd rule. He established a reformist state high in the Atlas mountains, from where his followers later conquered all northern Africa as far as Libya, together with Al-Andalus (Moorish Iberia), where they ruled until 1212. In Andalusia, the Almoravids were initially at least much less tolerant of other faiths and for some time stamped down on the open exchange of scholarship and learning that took place in Andalusia's famous academies. Ibn Tumart's zealousness may have resulted in some excesses. On the other hand, while he wanted to return to the purity of early Islam, ridding the faith of corrupt practices did not simply try to replicate the past, but claimed the right to pursue independent judgment, which at least in theory opened up the possibility of fresh insight into God's purposes. Religious people need reminding, from time to time, that the challenge of establishing a just social order is worth pursuing. Many people of faith believe that only such a society can serve as a foundation for a unified world of peace, which they regard as the final goal of human history.

Ibn Tumart was a member of the Masmuda, a Berber tribe of the Atlas Mountains. The name "Ibn Tumart" comes from the Berber language and means "son of the earth."[1] He is said to have been a descendant of Muhammad. (He may have invented this lineage to attract support for his claim to be a reviver of pure Islam.)[2] The Berbers had avoided incorporation into the cultural spheres of the Carthaginians, Romans, Vandals, and Byzantines who had in the past conquered Barbary. Ultimately, however, the Berbers succumbed to the evangelization of the Muslims, and adopted Islam.

Ibn Tumart was the son of a lamplighter in a mosque and had been noted for his piety from his youth; he was small and misshapen and lived the life of a devotee-beggar. He would light many candles at the tombs of saints and earned the nick-name "lover of light." As a youth he first traveled to Cordoba in Spain, then under Muslim, rule then performed the hajj pilgrimage at Mecca (or "Makkah"). He then studied in Baghdad at the school founded by Abu al-Hasan al-Ash'ari. He soon began to call for a return to the principles of Islam as set out in the Quran and the traditions of the prophet Muhammad, and to stress God's Unity. He is said to have met al-Ghazali.[3] His main principle was a strict Unitarianism which denied the independent existence of the attributes of God as being incompatible with his unity, and was therefore a polytheistic idea. He denounced the Almoravids, who controlled Andalusia and North Africa, whom his successor would defeat, as anthropomorphists.[4] The Almoravids paid attention to the minutiae of Islamic law; Ibn Tumart was interested in morality. Repudiating the notion that the four schools of Sunni jurisprudence were definitive interpretation of Islamic law, he claimed the right of ijtihad.[5] Yellen and Abrahams reproduce Ibn Tumart's "Confession," which has, they comment, "striking points of similarity with the medieval synagogue hymn of Adon Olam."[6] He may also have been influenced by Ibn Hazm.[7] Influenced by Ghazali, Ibn Tumart was never only interested in external religious acts but also in inner renewal.

After his return to Magreb at the age of 28, Ibn Tumart began preaching and heading attacks on wine-shops and on other manifestations of immorality. He even went so far as to assault the sister of the Almoravid (Murabit) Amir `Ali III, in the streets of Fez, because she was going about unveiled after the manner of Berber women. Ali III allowed him to escape unpunished. In 1121, he declared himself to be the Mahdi "the one who was sent to reestablish faith,"[8] openly claiming that he was sinless.[9]

Driven from several towns for his reforming zeal, which did not please everyone, around about 1122, he took refuge among his own people, the Masmuda, in the Atlas Mountains, where he emerged as leader of his own community, or state, based on the town of Tin Mal, in the center of what is now Morocco. He attracted followers from various clans, whose leaders gathered in an Assembly consisting of 50 members. Above this, a Privy Council of ten "directed the affairs of the movement."[10] This use of shura,[11] or consultation, was a more egalitarian system of governance than that commonly practiced in the Muslim world at the time, although members of his own clan did dominate the Privy Council. There is little doubt that as the self-proclaimed Mahdi he wanted to establish a just society as well as one that upheld the divine law. Yellin and Abrahams describe Ibn Tumart as "a man of great spiritual and personal magnetism" whose strict monotheism was completely free from "anthropomorphic expressions."[12]

He died in 1128, and was succeeded by an able deputy, Abd al-Mu'min who may have kept his death secret for two years, until his own influence was established. Abd al-Mu'min had been given clear instructions to either reform, or to oppose and defeat the Almoravids:

March against these heretics and perverters of religion who call themselves the al-Murabits,[13] and call them to put away their evil habits, reform their morals, renounce their heresy, and acknowledge the sinless Imam Mahdi. If they respond to your call, then they are your brothers; what they have will be yours, and what you owe they will owe. And if they do not, then fight them, for the Sunna makes it lawful for you.[14]

Between 1130 and his death in 1163, Abd al-Mu'min not only defeated the Almoravids, but extended his power over all northern Africa as far as Egypt, becoming Emir of Morocco in 1149. Al-Andalus followed the fate of Africa, and in 1170, the Almohads transferred their capital to Seville. This step was followed by the founding of the great mosque, subsequently superseded by the cathedral. The Giralda tower-minaret, which survives, was erected in 1184 to mark the accession of Abu Yusuf Ya'qub al-Mansur. From the time of Yusuf II (the sixth caliph), they governed Iberia and Central North Africa through lieutenants, treating dominions outside Morocco as provinces.

The Almohads after Ibn Tumart 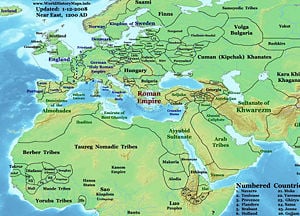 Near East in 1200 C.E., showing the Almohade Empire on the Iberian peninsula and Northwest Africa and its neighbors.

The Almohad princes had a longer career than the Almoravids. Yusuf II or "Abu Ya'qub" (1163-1184), and Ya'qub I or "al-Mansur" (1184-1199), the successors of Abd al-Mumin, were both able men. Their zealousness drove a number of their Jewish and Christian subjects to take refuge elsewhere, some moving to areas of Spain and Portugal under Christian rule but many also migrated elsewhere in the Muslim world, including Maimonides who went to the Court of Saladin in Egypt. Yellen and Abrahams comment, though, that those Jews who chose conversion to Islam rather than migration did not regard this apostasy as disgraceful because of the uncompromising monotheism taught by Ibn Tumart's disciples.[12] Ibn Tumart's disciples saw the relaxed society of Andalusia in which scholarly exchange took place between Jews, Christians, and Muslims as a scandalous compromise of Islam as the true path to God.

In the end, though, the Almohads became less fanatical and Ya'qub al Mansur (3rd Almohad caliph) was a highly accomplished man, who wrote a good Arabic style and who protected the philosopher Averroes. His title of al-Mansur, "The Victorious," was earned by the defeat he inflicted on Alfonso VIII of Castile in the Battle of Alarcos (1195). The Christian states in Iberian Peninsula were becoming too well organized to be overrun by the Muslims, and the Almohads made no permanent advance against them. In 1212, Muhammad III, "al-Nasir" (1199-1214), the successor of al-Mansur, was defeated by the allied five Christian princes of Castile, Navarre and Portugal, at the Battle of Las Navas de Tolosa in the Sierra Morena. All the Moorish dominions in the Iberian Peninsula were lost in the next few years, partly by the Christian reconquista of Andalusia, and partly by the revolt of the Muslims of Granada, who put themselves under the protection of the Christian kings, becoming their vassals.

The history of their decline differs from that of the Almoravides, whom they had displaced. They were not defeated by a zealous religious movement but were destroyed piecemeal by the revolt of tribes and districts. Their most effective enemies were the Beni Marin (Marinids) who founded the next Moroccan dynasty. The last representative of the line, Idris II, "El Wathiq"' only held their capital, Marrakech, where he was murdered by a slave in 1269.

The rise and fall of the Almohads, inspired by Ibn Tumart, fits the cyclical nature of Islamic history as described by Ibn Khaldun. He characterized Islamic history as cyclical in which zealous religious reformists such as the Almohads sweep into the towns from the desert, where a puritan life-style and strong group feeling are natural, establish rule then themselves become lax as the "toughness of desert life" is lost. Then group feeling is weakened to such a degree that the dynasty is "no longer able to protect itself" and before long it is "swallowed up by other nations."[15]

Ibn Tumart's zealousness for moral conduct and for what he saw as orthodox Islam may have led to some excesses and to a lack of tolerance for human weakness. On the other hand, religious history is full of the lives and contributions of revivalist leaders who call the faithful back from laxity towards a stronger, more profound, truer, deeper expression of faith. Ibn Tumart wanted to return to the purity of early Islam, ridding the faith of corrupt practices. Yet, he did not simply try to replicate the past. Claiming the right to pursue independent judgment, this at least in theory opened up the possibility of fresh insight into God's purposes.

Retrieved from https://www.newworldencyclopedia.org/p/index.php?title=Ibn_Tumart&oldid=1009126
Categories:
Hidden category:
This page was last edited on 25 January 2018, at 15:24.
Content is available under Creative Commons Attribution/Share-Alike License; additional terms may apply. See Terms of Use for details.