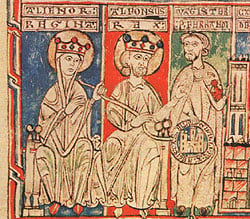 Alfonso VIII (November 11, 1155 – October 5, 1214), called the Noble or Él de las Navas, was the King of Castile from 1158 to his death and King of Toledo. He is most remembered for his part in the Reconquista and the downfall of the Almohad Caliphate. After having suffered a great defeat with his own army at Alarcos against the Almohads, he led the coalition of Christian princes and foreign crusaders who broke the power of the Almohads in the Battle of the Navas de Tolosa in 1212, an event which marked the arrival of an irreversible tide of Christian supremacy on the Iberian peninsula. His reign saw the domination of Castile over León and, by his alliance with Aragon, he drew those two spheres of Christian Iberia into close connection.

On the one hand, Alfonso is credited with turning the Christian tide against the Muslim emirs in Spain. On the other hand, relations between the two cultural spheres were always complex. Alfonso himself signed a treaty with the Muslims after the battle of Alarcos. Representations of Christian-Muslim encounter at this time as characteristically hostile flies in the face of historical fact. There was inter-marriage even at the highest levels of society, alliances across the faith divide and a flourishing academic interchange, of which a future Alfonso, Alfonso X of Castille, was a prominent patron. Both sides at times demonized the other, but harmony—as well as hostility—was a common experience. In a world where new awareness of common human responsibility towards each other and towards the planet itself is developing, perpetuating the image of Others as demons, ignoring examples of harmonious co-existence, does nothing to encourage human cooperation across race and religion to make the world a better, more harmonious, just and peaceful place.

Alfonso VIII was born to Sancho III of Castile and Blanca, daughter of García Ramírez of Navarre, in Soria on November 11, 1155. He was named after his grandfather Alfonso VII. His early life resembled that of other medieval kings. His father died in 1158 when his mother was also dead. Though proclaimed king when only three years of age, he was regarded as a mere name by the unruly nobles to whom a minority was convenient. Immediately, Castile was plunged into conflicts between the various noble houses vying for ascendancy in the inevitable regency. The devotion of a squire of his household, who carried him on the pommel of his saddle to the stronghold of San Esteban de Gormaz, saved him from falling into the hands of the contending factions. The Lara and Castro both claimed the regency, as did the boy's uncle, Ferdinand II of León. In March 1160 the former two families met at the Battle of Lobregal and the Castro were victorious.

Alfonso was put in the custody of the loyal village Ávila. At barely 15, he came forth to do a man's work by restoring his kingdom to order. It was only by a surprise that he recovered his capital Toledo from the hands of the Laras.

In 1174, he ceded Uclés to the Order of Santiago, which became the order's principal seat. From Uclés, he began a campaign which culminated in the reconquest of Cuenca in 1177. The city surrendered on September 21, the feast of Saint Matthew, ever afterwards celebrated by the citizens of the town.

Alfonso took the initiative to ally all the major Christian kingdoms of the peninsula — Navarre, León, Portugal, and Aragon — against the Almohads. By the Treaty of Cazola of 1179, the zones of expansion of each kingdom were defined.

After founding Plasencia (Cáceres) in 1186, he embarked on a major initiative to unite the Castilian nobility around the Reconquista. In that year, he recuperated part of La Rioja from the Kingdom of Navarre.

In 1195, he went to the defense of Alarcos on the river Guadiana, then the principal Castilian town in the region.[1] At the subsequent Battle of Alarcos, he was roundly defeated by the caliph Abu Yaqub Yusuf al-Mansur. Following the Battle, Alfonso and al-Mansur signed a truce. The reoccupation of the surrounding territory by the Almohads was quickly commenced with Calatrava falling first. For the next seventeen years, the frontier between Moor and Castilian was fixed in the hill country just outside Toledo.

Finally, in 1212, through the mediation of Pope Innocent III, a crusade was called against the Almohads. Castilians under Alfonso, Aragonese and Catalans under Peter II, Navarrese under Sancho VII, and Franks under the archbishop Arnold of Narbonne all flocked to the effort. The military orders also lent their support. Calatrava first, then Alarcos, and finally Benavente were captured before a final battle was fought at Las Navas de Tolosa near Santa Elena on July 16. The caliph Muhammad an-Nasir was routed and Almohad power broken. This marked the beginning of the end of the Muslim presence in Spain; for here on the Reconquista picked up momentum.

Alfonso was the founder of the first Spanish university, a studium generale at Palencia, which, however, did not survive him. His court also served as an important instrument for Spanish cultural achievement. His marriage (Burgos, September 1180) with Eleanor (Leonora), daughter of Henry II of England and Eleanor of Aquitaine, brought him under the influence of the greatest governing intellect of his time. Troubadours and sages were always present, largely due to the influence of Eleanor.

Alfonso died at Gutierre-Muñoz and was succeeded by his eldest surviving son, Henry I, named after his maternal grandfather.

Alfonso was the subject for Lion Feuchtwanger's novel Die Jüdin von Toledo (The Jewess of Toledo), in which is narrated an affair with a Jewish subject in medieval Toledo in a time when Spain was known to be the land of tolerance and learning for Jews, Christians, and Muslims. The titular Jewish woman of the novel is based on Alfonso's historical paramour, Rahel la Fermosa.

On the one hand, Alfonso is credited with turning the Christian tide against the Muslim emirs in Spain. On the other hand, relations between the two cultural spheres were always complex. Alfonso himself signed a treaty with the Muslims after the Battle of Alarcos. Even as Alfonso was turning the tide at Navas de Tolosa, King Alfonso IX of León was not only "standing aloof" but almost certainly did so because he enjoyed very warm relations with Morocco. He is rumored to have accepted Muslim gold. Dom Pedro, a Portuguese prince who spent time in exile at Alfonso IX's court, captained a regiment for the Almohads based in the Mahgreb, from 1216-1228 then returned to Iberia and served the king of Aragon.[2] Fletcher remarks on the similarity between the side-changing careers of Dom Pedro and El Cid. Representations of Christian-Muslim encounter at this time as only hostile flies in the face of historical fact. There was inter-marriage even at the highest levels of society, alliances across the faith divide and a flourishing academic interchange, of which a future Alfonso, Alfonso X of Castille, was a prominent patron.[3] O'Shea comment that "Alliances of convenience were often formed between Muslim and Christian chieftains in Spain", adding that many "were related through the exertions of their concubines."[4] He points out that in the region of Spain where the great battles were fought, authorities have now "laid out tourist routes celebrating the Islamic past" and a Museum is being built on the site of the Battle of Navas de Tolosa not to celebrate the victory of one civilization over another but to recall a time when these two civilizations co-existed as "the pendulum of memory is swinging towards a reconciliation of many different traditions."[5]

The Maghreb and Iberia faced each other across a narrow strait. At this geographical point, two continents met. Inevitably, one side has crossed over to the other side to expand their polities. Both sides have used religion to stir up enthusiasm for hostility, at times demonizing the other side. Yet the reality of life for much of the time was that people comfortable crossed over, serving one side then the other. The reality of life in border zones is such that people almost always mix and mingle, effectively building bridges. An accurate reconstruction of the story of life in this zone shows that it is possible to cross barriers and even to work with people who one's own culture usually demonize and stereotype as different from ourselves. The rights and wrongs of conquest and reconquest aside, this can be regarded as a positive quality in an age when too many people thought it a duty to slaughter the religious and cultural Other without any attempt to understand their faith, or even to persuade them to convert.

With Eleanor, (Leonora of England) he had 11 children: