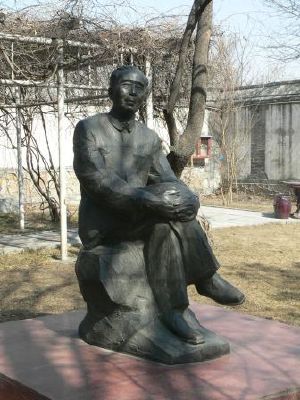 Guo Moruo studied at Sixth Higher School and the Medical School of Kyushyu Imperial University (九州帝国大学) in Japan in his youth. After returning to China, he joined the Kuomintang led by Chiang Kai-shek. Guo Maruo, however, confronted with Chiang Kai-shek and joined the Chinese communist party. After World War II, he took various high government positions of People's Republic of China and became the first President of the Chinese Academy of Sciences in 1949 until his death in 1987.

In 1966, Guo Moruo was forced to give "self-criticism" under Cultural Revolution led by Mao Zedong. His family members were also persecuted and two of his children were led to kill themselves. In order to protect himself, he praised Mao and Jiang Qing and joined Mao's campaign of criticism against Confucianism and Lin Biao. When the Gang of Four (Mao and four communist leaders who led the Cultural Revolution: Jiang Qing, Zhang Chunqiao, Yao Wenyuan and Wang Hongwen) lost power, Guo Moruo published a poem criticizing them.

Guo Moruo, originally named Guo Kaizhen, was born on November 10 or 16 (he was not sure himself), in the small town of Shawan (沙湾, 'Sandy Cove') (now, part of the "prefecture-level city" of Leshan) in China's Sichuan province. Shawan is located on the Dadu River some 40 km (25 miles) southwest from what was then called the city of Jiading (Chia-ting, 嘉定路), and now is the "central urban area" of the "prefecture-level city" of Leshan.

Guo Moruo's father's ancestors were Hakkas from Ninghua County (xian) in Tingzhou fu, near the western border of Fujian. They moved to Sichuan in the second half of the seventeenth century, after Sichuan had lost much of its population to the rebels/bandits of Zhang Xianzhong (ca. 1605-1647). According to the family legend, the only possessions that Guo's ancestors brought to Sichuan were things they could carry on their backs. Guo Moruo's great-grandfather, Guo Xianlin, was the first in the family to achieve a degree of prosperity. Guo Xianlin's sons established the Guo clan as the leaders of the local river shipping business, thus creating ties with important people in the entire region of Sichuan. It was only then that the Guo clan members became able to send their children to school.[1]

Guo Moruo's father, one of whose names may possibly have been Guo Mingxing (1854-1939) had to drop out of school at the age of 13, spent half a year as an apprentice at a salt well. Later he entered his father's business. A shrewd and smart man, who obtained local renown as a Chinese medicine doctor, he successfully traded in oils, opium, liquor, and grain, and operated a money changing business. His business success allowed him to magnify his family's real estate and salt well holdings.[1]

Guo Moruo's mother, in contrast, came from a scholar-official background. She was the daughter of Du Zhouzhang (Tu Cho-chang), a holder of the coveted "jinshi" (chin-shih; [Imperial examination]] required to enter the state's bureaucracy) degree. When serving as an acting magistrate in Huangping Zhou (country subdivision) prefecture ''(zhou)''[2] (in eastern Guizhou), Du died heroically in 1858 when fighting Miao rebels, when his daughter (future Guo Moruo's mother) was less than a year old. She married into Guo family in 1872, when she was just 14.[1]

Guo Moruo - originally known under his birth name, Guo Kaizhen (Kuo K'ai-chen) - was the eighth child. Three of his siblings had died before he was born, but more children were born later; by the time he went to school, he had seven siblings.[1]

Guo also had the childhood name Guo Wenbao ('Cultivated Leopard'), given due to the dream his mother had on the night he was conceived.[1]

A few years before Guo Moruo was born, his parents retained a private tutor, Shen Huanzhang, to provide education for their children, in the hopes that they pass the civil service examinations. A precocious child, Guo Moruo started studying at this "family school" in the spring of 1897, at the early age of four and half. Initially, the study was based on Chinese classics, but since the government education reforms of 1901, mathematics and other modern subjects started to be introduced.[1]

When in the fall of 1903 a number of public schools were established in Sichuan's capital, Chengdu, Guo children started going there to study. Guo Moruo's oldest brother, Guo Kaiwen (1877-1936), entered one of them, Dongwen Xuetang, a secondary school preparing students for study in Japan; the next oldest brother, Guo Kaizou (K'ai-tso), joined Wubei Xuetang, a military school. Guo Kaiwen soon became instrumental in exposing his brother and sisters still in Shawan to modern books and magazines that allowed them to learn about the wide world outside.[1]

Guo Kaiwen continued to be a role model for his younger brothers when in February 1905 he left for Japan, to study law and administration in Tokyo Imperial University on a provincial government's scholarship.[1]

After passing competitive examinations, in the early 1906 Guo Moruo started attending the new upper-level primary school (gaodeng xiao xue) in Jiading. It was a boarding school, located in a former Buddhist temple, and the boy lived on premises. He continued on to a middle school in 1907, acquiring by this time the reputation of an academically gifted student but a troublemaker. His peers respected him and often elected him a delegate to represent their interests in front of the school administration. Often spearheading student-faculty conflicts, he was expelled and reinstated a few times, and finally expelled for good in October 1909.[1]

Young Guo was, in a sense, glad to be expelled, as he now had a reason to go to the provincial capital Chengdu to continue his education there.[1]

In October 1911, Guo was surprised by his mother's announcement of an arranged marriage. He went along with his family's wishes, marrying his appointed bride, Zhang Jinghua, sight-unseen in Shawan in March 1912. Immediately, he regretted this marriage, and five days after the marriage, he left his ancestral home and returned to Chengdu, leaving his wife behind. He never formally divorced her, but apparently never lived with her either.[1]

Following his elder brothers, Guo Moruo left China in December 1913, arriving in Japan early January of 1914. After a year of preparatory study in Tokyo, he entered Sixth Higher School in Okayama.[1] When visiting a friend who was hospitalized in Saint Luke's Hospital in Tokyo, in the summer of 1916, Guo fell in love with Sato Tomiko, a Japanese woman from a Christian family, who worked at the hospital as a student nurse. Sato Tomiko would become his common-law wife. They were to stay together for 20 years, until the outbreak of the war, and to have five children together.[3]

After graduation from the Okayama school, Guo entered the Medical School of Kyushyu Imperial University (九州帝国大学) in Fukuoka in 1918.[1] He was more interested in literature than medicine, however. His studies at this time focused on foreign language and literature, namely that of: Spinoza, Goethe, Walt Whitman, and the Bengali poet Rabindranath Tagore. Along with numerous translations, he published his first poem anthology, titled The Goddesses (女神 - nǚ shén) (1921). He was one of the co-founder of the Ch'uang-tsao she ("Creation Society") in Shanghai, which promoted modern and vernacular literature.

He joined the Communist Party of China in 1927. He was involved in the Communist Nanchang Uprising and fled to Japan after its failure. He stayed there for 10 years studying Chinese ancient history. During that time he published his work on inscriptions on oracle bones and bronze vessels, Liang Chou chin wen tz'u ta hsi t'u lu k'ao shih (Pinyin: “Liangzhou jinwenci daxi tulu kaoshi”) (1935 “Corpus of Inscriptions on Bronzes from the Two Zhou Dynasties”). In this work, he attempted to demonstrate, according to the Communist doctrine, the “slave society” nature of ancient China. His theory on the "slave society of China" remains highly controversial, although it was praised by Mao Zedong and the party.

In the summer of 1937, soon after the Marco Polo Bridge incident, Guo returned to China to join the anti-Japanese resistance. His attempt to arrange for Sato Tomiko and their children to join him in China were frustrated by the Japanese authorities[3], and in 1939 he remarried to Yu Liqun (于立群; 1916-1979), a Shanghai actress.[3][4] After the war, Sato went to reunite with him but was disappointed to know that he had already formed a new family.

Along with holding important government offices in the People's Republic of China, he was a prolific writer, not just of poetry but also fiction, plays, autobiographies, translations, and historical and philosophical treatises. He was the first President of the Chinese Academy of Sciences and remained so from its founding in 1949 until his death in 1978. He was also the first president of University of Science & Technology of China (USTC), a new type of university established by the Chinese Academy of Sciences (CAS) after the founding of the People's Republic of China and aimed at fostering high-level personnel of science and technology.

In 1966 he was one of the first to be attacked in the Great Proletarian Cultural Revolution. He confessed that he had not properly understood the thought of Mao Zedong, and agreed that his works should be burned. However, this was not enough to protect his family. Two of his sons, Guo Minying and Guo Shiying, committed suicide in 1967 and 1968 following "criticism" or persecution by Red Guards.[5][6]

Unlike the others similarly attacked, Guo Moruo's was spared as he was chosen by Mao as "the representative of the rightwing" in the 9th National Congress of the Communist Party of China in 1969. He regained much of his influence by the seventies.

Guo Moruo was a major writer of twentieth century China. Guo Moruo wrote extensively in many areas from literature, poetry, and history. Representative works in literature include Nü shen (女神), Qu Yuan (屈原). In the area of ancient Chinese history, he wrote Zhongguo gu dai she hui yan jiu (中國古代社會硏究) and characterized Zhou Dynasty as a slave society in this work. He also characterized Cao Cao (155-220) as a heroic figure, who had been traditionally portrayed as a villain. His new perspective on Cao Cao aroused a controversy among historians.

Although his literary works contained romanticist ideas, he also embraced Marxism and wrote extensively on history and philosophy. When the People’s Republic of China was established, Guo also took on an important political position in becoming the president of the Chinese Academy of Sciences. Although Guo had exceptional talent as a scholar and writer, he was not able to realize his potential due to political constraints. Despite his commitment to Marxism, he was one of the first to be attacked during the Cultural Revolution led by Mao Zedong. By force, he “confessed” in public that his works were valueless and that he did not sufficiently understand communism. Furthermore, the intense criticism and persecution drove two of his children to suicide. While Mao was in power, he wrote articles that praised Mao and criticized Mao’s political opponents. Yet, once Mao and the Gang of Four lost power, he wrote poems that criticized them.

The two cities in which Guo Moruo lived, Ichikawa City in Japan, where he lived about ten years, and Leshanin China established a sister-city relationship. In Ichikawa City, the house he lived in was relocated to another location in the city and made into the Guo Moruo Museum in 2004.

With Sato Tomiko (listed chronologically in the order of birth):

With Yu Liqun (listed chronologically in the order of birth):