Gunung Mulu National Park near Miri, Sarawak, Malaysian Borneo, encompasses remarkable caves and karst formations in a mountainous equatorial rainforest setting. The Sarawak chamber, in Gua Nasib Bagus, has been identified as the largest underground chamber in the world, three times larger the Big Room in Carlsbad Caverns National Park, New Mexico, previously the largest. The national park presents a challenge to explorers who choose to travel by land as the location is located in a remote jungle setting.

The park, famous for its caves, has been renown for the expeditions conducted to explore them and their surrounding rain forest, most notably Benarat 2005 Expedition and the Royal Geographic Expedition of 1977-1978, with more than 100 scientists in the field for fifteen months. They explored Gunung Benarat, discovering the extensions in the Benarat Caves as well as newly discovering Whiterock cave (Gua Batu Putih). UNESCO designated the Gunung Mulu National Park a World Heritage Site in 2000.

Spelunkers continue to explore Gunung Mulu for adventure, the same thrill that attracted the first explorers. The primary focus has shifted to the promotion of an awareness of the significance of the park and its environment through ecotourism. Ecotourism fosters understanding and appreciation of the park's value for its natural beauty.

Gunung Mulu, a remote and inaccessible area, proves a challenge to get to reach by land. Most researchers and explorers travel by air from Miri airport, although riverboats offer another way to travel most the distance to the national park. Riverboat travelers finish the last part of the trip by long boat. The river route requires twelve hours from Miri to Gunung Muly, while an air flight takes only thirty minutes. The national park takes its name from Mount Mulu (Malay: Gunung Mulu) (elevation 7, 795 feet). A sandstone and shale mountain, only Mount Murud has a higher elevation in Sarawak.[3] 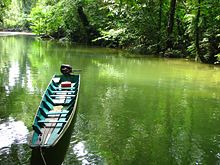 Three English explorers discovered Sarawak Chamber in January 1981.[5] Andy Eavis, Dave Checkley, and Tony White (all experienced cave explorers) had been exploring the dense, unpopulated area of the Gunung Mulu National Park jungle in an expedition led by fellow Englishman Ben Lyon. While surveying some of the newly found caves in the region, they stumbled into a huge cavern. Even with their powerful lamps, they could not see the other end of the chamber through the darkness.

The three explorers had walked into the largest known enclosed space in the world, which they later named the Sarawak Chamber. Three times the size of the Big Room in Carlsbad Caverns National Park, New Mexico, previously thought to be the largest underground chamber, the chamber measures 700 meters (2,300 feet) long, 400 meters (1,300 feet) wide and at least 70 meters (230 feet) high. The chamber could hold ten jumbo jets nose-to-tail.

To reach the Sarawak Chamber requires following the river upstream from the cave entrance. That long passage has a roof of at least 230 meters high, requiring swimming and a traverse along a ledge. The story of how it was discovered has been recorded "Underground Worlds" by Donald Jackson[6] and also in "Giant Caves of Borneo" by Meredith, Wooldridge and Lyon.[7] 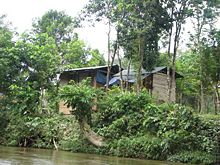 The Benarat 2005 Expedition to Gunung Mulu National Park, took place between September 8 and October 7, 2005. The expedition was the latest in a series of Anglo-Sarawak cooperative activities which commenced in 1977. Sixteen United Kingdom based spelunkers worked the exploration for varying periods of time, together with a number of officers from the Gunung Mulu National Park.

The expedition was one of a series of explorations in Gunung Benarat and the northern end of Gunung Api. At the end of the 2003 expedition, a number of excellent underground leads had been discovered in the Benarat Caves and the discovery of Whiterock Cave (Gua Batu Putih), close to Blackrock Cave, offered new hopes of major extensions in Gunung Api.

Objectives of the Expedition

The expedition primary objectives in Gunung Benarat were as follows

In Gunung Api, the spelunkers aimed to:

High level entrance. Climbers abandoned the attempt to find the high level entrance at approximately eighty meters. At sixty meters, the climbers discovered a new cave entrance, that becoming the focus of efforts. Named Moon Cave or Gua Bulan in Malay, the system consists of a main passage heading straight along the strike. Spelunkers explored the cave repeatedly, discovering a total length of 6.635 kilometers to a concluding boulder ramp with no draft found. All exploration was carried out on the single level and a number of outstanding leads remain in the form of upward and downward trending ramps.

Exploration of Whiterock Cave. Substantial extensions were made to Whiterock Cave. A further 17.261 kilometers of passage was explored, bringing the total to 20.968 kilometers. Whiterock constitutes a multi-level system, providing a key to the cave formation at the northern end of Gunung Api. Its upper levels consist of large passages, partially blocked with sediment, including extensive deposits of rotted cobbles reminiscent of similar deposits in Clearwater Cave and indicative of great age.

The cave includes the Api Chamber, approximately 300 x 200 meters in dimension with a surveyed circumference of 900 meters. Two connections were established to Blackrock Cave via the Eagle Ramp and Firecracker. The inclusion of Whiterock brings the total length of the Clearwater System to over 130 kilometers. The Racer Entrance to Blackrock was relocated and a GPS position was fixed. Much of Whiterock remains for future exploration, a number of leads remained outstanding.