Guarana is the common name for a South American woody vine or sprawling shrub, Paullinia cupana in the Sapindaceae family, with large, pinnately compound evergreen leaves with five leaflets, clusters of small flowers, and red to brown globular fruits that split open at maturity and have black seeds (one per fruit). Guarana also is the name of a nonalcoholic carbonated beverage produced from the seeds. The Guarana plant is native to the Amazon basin and especially common in Brazil.

The high concentration of caffeine in the seeds, which is more concentrated than even in coffee beans, provides for the plants a defense mechanism, helping to repel plant pathogens of the fruit and its seeds. For human beings, the caffeine is one of the active ingredients that has made guarana commercially popular in Brazil, with increasing importance as a trade commodity to Europe, North America, and Asia.

Paullinia cupana, or guarana, is a member of the Sapindaceae, a family of flowering plants that also include maple, horse chestnut, and lychee. In cultivation, guarana is often referred to as Paullinia cupana variety sorbilis (Erickson et al. 1984).

Guarana grows in the forest primarily as a liana (Erickson et al. 1984). Lianas are long-stemmed, usually woody vines that are rooted in the soil at ground level and use trees, as well as other means of vertical support, to climb up to the canopy in order to get access to well-lit areas of the forest. P. cupana has woody stems and is supported by large tree trunks, climbing high into the forest canopy. However, when cultivated, it grows in the form of a sprawling shrub that is perhaps two meters tall and a diameter of about four meters (Erickson et al. 1984).

Guarana is an evergreen tree. It features large leaves that are pinnately compound, with five shiny leaflets. The stems have deep longitudinal furrows. The flowers are small and white, with male and female flowers on the same tree.

Guarana is best known for its fruit, which is about the size of a coffee berry and with a color that ranges from brown to red. The fruit splits open at maturity. Each fruit harbors one black seed. The black seeds are partly covered by white arils.

The guarana fruit contains approximately five times as much caffeine as coffee beans (Weinberg and Bealer 2001). Although the substance extracted was named guaranine, and thought to be a unique chemical, it is in actuality caffeine, albeit impure caffeine with some properties of the host plant, such as bound to a particular phenol or tannin (Taylor 2005). Xanthines such as caffeine are bound to such substances but are freed during the roasting process (Taylor 2005). As with other plants producing caffeine, the high concentration of caffeine is a defensive toxin that repels pathogens from the berry and its seeds (Ashihara et al. 2008).

Guarana was used by natives in the Amazon Basin prior to the arrival of Europeans. Indian tribes, such as the Guaraní used it, and still use it, for a wide variety of medicinal purposes (Taylor 2005; Angelo et al. 2008; Erickson et al. 1984). The Guaranís also would make tea by shelling and washing the seeds, followed by pounding them into a fine powder. The powder is kneaded into a dough and then shaped into cylinders. This product is known as guarana bread or Brazilian cocoa, which would be grated and then immersed into hot water along with sugar (Weinberg and Bealer 2001).

This plant was introduced to western civilization in the seventeenth century following its discovery by Father Felip Betendorf. By 1958, guarana was commercialized (Weinberg and Bealer 2001).

Guarana plays an important role in Tupi and Guaraní Brazilian culture. The color contrast between the seed and the fruit when it has been split open has been likened to eyeballs; this has formed the basis of a myth. According to this myth, dating back to the Sateré-Maué tribe, guarana's domestication originated with a deity killing a beloved village child. In order to console the villagers, a more benevolent god plucked the left eye from the child and planted it in the forest, resulting in the wild variety of guarana. The god then plucked the right eye from the child and planted it in the village, giving rise to domesticated guarana (Beck 2005).

The word guarana, derived from the Guaraní tribe (Taylor 2005) comes from the Portuguese guaraná, which has its origins in the Sateré-Maué word warana (Merriam-Webster 2008).

According to the Biological Magnetic Resonance Data Bank, when guaranine is defined as only the caffeine chemical in guarana, it is identical to the caffeine chemical derived from other sources, for example coffee, tea, and mate. Guaranine, theine, and mateine are all synonyms for caffeine when the definitions of those words include none of the properties and chemicals of their host plants except the chemical caffeine (BMRB 2008). The amount of caffeine in guarana, about 4 to 8 percent, is higher than that in the coffee bean (1-2.5 percent) or Yerba mate leaves (0.7-2 percent) or chocolate (0.25 percent) (Taylor 2005).

Natural sources of caffeine contain widely varying mixtures of xanthine alkaloids other than caffeine, including the cardiac stimulants theophylline and theobromine and other substances such as polyphenols which can form insoluble complexes with caffeine (Balentine et al. 1998).

Guarana is used in sweetened or carbonated soft drinks and energy shots, an ingredient of herbal tea or contained in capsules. Generally, South America obtains most of its caffeine from guarana (Weinberg and Bealer 2001). Guarana is commercially produced largely in the middle Amazon region of northern Brazil (Erickson et al. 1984).

Guarana has long been used medicinally. Past and present tribal uses include as a pain reliever, cardiovascular drug, preventative for arteriosclerosis, stimulant, and tonic to treat diarrhea, migraine, fever, hypertension, neuralgia, and dysentery. It is used by present-day Brazilians to overcome heat fatigue, for obesity, for intestinal gas, to detoxify the blood, and other such purposes. It is felt to increase mental alertness and increase stamina and physical endurance (Taylor 2005).

As guarana is rich in caffeine, it is of interest for its potential effects on cognition. In rats, guarana increased memory retention and physical endurance when compared with a placebo (Espinola et al. 1997). A 2007 human pilot study (Haskell et al. 2007), assessed acute behavioral effects to four doses (37.5 mg, 75 mg, 150 mg and 300 mg) of guarana extract. Memory, alertness, and mood were increased by the two lower doses, confirming previous results of cognitive improvement following 75 mg guarana. These studies have not been evaluated by any United States government agencies, so within the U.S. there is no medical or regulatory approval for use of guarana to enhance cognition. 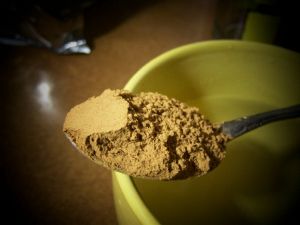 In the United States, guarana has the status of being generally recognized as safe (GRAS) (Heneman and Zidenberg-Cherr 2007).

Preliminary research has shown guarana may have metabolic effects. One study showed an average 11.2 pound (5.1 kilogram) weight loss in a group taking a mixture of yerba mate, guarana, and damiana, compared to an average one pound loss in a placebo group after 45 days (Anderson and Foght 2001). Although inconclusive about specific effects due only to guarana, this study differs from another showing no effect on body weight of a formula containing guarana (Sale et al. 2006).

Guarana extract reduced aggregation of rabbit platelets by up to 37 percent below control values and decreased platelet thromboxane formation from arachidonic acid by 78 percent below control values (Bydlowski et al. 1991). It is not known if such platelet action has any effect on the risk of heart attack or ischemic stroke (Nicolaou et al. 1979).

From anecdotal evidence of excessive consumption of energy drinks, guarana may contribute (alone or in combination with caffeine and taurine) to onset of seizures in some people (Iyadurai and Chung 2007).

Retrieved from https://www.newworldencyclopedia.org/p/index.php?title=Guarana&oldid=1061010
Categories:
Hidden category:
This page was last edited on 2 December 2021, at 22:26.
Content is available under Creative Commons Attribution/Share-Alike License; additional terms may apply. See Terms of Use for details.