Grace, Princess of Monaco, née Grace Patricia Kelly, (November 12, 1929 – September 14, 1982) was an Academy Award-winning American film actress who, upon marriage to Rainier III, Prince of Monaco on April 19 1956, became Her Serene Highness The Princess of Monaco. She was the mother of the principality's current reigning Sovereign Prince, Albert II. Princess Grace was not required to renounce her American citizenship upon her marriage. For many people, she symbolized glamor. However, her family-centered life set a high standard of public morality that few in the movie industry could match. Her screen to palace story was a real life romance that seemed to match the artificial realities of show business. Although she retired from acting when she married her Prince, she remained in the public eye due to the high profile film festival of her adopted home.

Kelly's father was a self-made millionaire and a triple gold-medal-winning Olympic sculler at a time that the sport of rowing was at its zenith. He was active in politics, running for mayor of Philadelphia and serving on the Fairmount Park commission. During World War II, President Franklin Delano Roosevelt appointed the senior Kelly as his National Director of Physical Fitness, a public relations post which allowed Kelly to use his fame to instill the virtues of physical fitness.

Her brother John B. Kelly, Jr., followed in that tradition. He won the Sullivan Award in 1947, as the top amateur athlete in the country. His rowing exploits were well-chronicled. John, Jr., gave his sister as a wedding present the bronze medal he won at the 1956 Summer Olympics. Kelly Drive in Philadelphia is named for John, Jr., who was a city councilman there.

Although her family had opposed her becoming an actress, Kelly became a fashion model and appeared in her first film, Fourteen Hours (1951), when she was 22. The following year she "starred" in High Noon (1952), a generally praised but somewhat controversial western starring Gary Cooper.

Her next film, Mogambo (1953), was a drama set in the Kenyan jungle which centers on the love triangle portrayed by Kelly, Clark Gable, and Ava Gardner. The movie earned Kelly an Oscar nomination for Best Supporting Actress, but the award went to Donna Reed for her role in From Here to Eternity. Kelly made three films with Alfred Hitchcock: Dial M for Murder, Rear Window, and To Catch a Thief. In 1955, she was awarded the Academy Award for Best Actress for The Country Girl.

The musical comedy High Society (1956) was her last film, as her marriage to Rainier III marked her retirement from acting. She reportedly was surprised to learn from Rainier that she was expected to give up her film career entirely, but followed his wishes grudgingly.

Her Catholicism and her presumed ability to bear children were key factors in her being chosen to marry Prince Rainier. 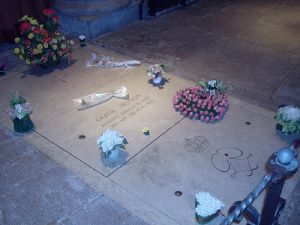 In 2002, a new treaty between France and Monaco clarified that even if there are no direct heirs of the reigning prince, the principality will remain an independent nation, rather than reverting to France. Due to Prince Albert's enduring bachelorhood, Monegasque law now states that in the event of a reigning prince's lack of descendants, his siblings and their children will inherit the throne. The line of succession is now Princess Caroline, then her children by her late second husband Stefano Casiraghi, who died in 1990, and her daughter by her third husband, Ernst August V, Prince of Hanover.

At the age of 52, in September 1982, Princess Grace suffered a stroke while driving. It had been rumored that she was driving on the same stretch of highway in Monaco that had been featured in To Catch a Thief, although her son claims that it was not. It resulted in an accident, and she died the next day without regaining consciousness. Princess Stéphanie, who was alleged by some sources to have been the actual driver of the car, suffered only minor injuries.

Princess Grace is interred in St. Nicholas Cathedral, Monte Carlo, Monaco, Prince Rainier was buried alongside her following his death in 2005.

Grace Kelly and Prince Rainier on a 1956 stamp of Monaco.