Giant anteater is the common name for the largest species of anteater, Myrmecophaga tridactyla, characterized by a long, narrow, tapered snout without teeth, very long tongue, long and bushy tail, and five digits on each foot, including four with claws on the forefeet and five with claws on the hindfeet. The giant anteater is found in Central and South America. It is the only species in the Myrmecophaga genus.

The giant anteater is a solitary animal, found in many habitats, including grasslands, deciduous forests, and rainforests. It feeds mainly on ants and termites, sometimes up to 30,000 insects in a single day, helping to control populations of these organisms. However, it feeds only a short time at any one colony, allowing the colony to repopulate, while protecting itself from the soldier ants. Its large size means the adult has few predators, but it does serve as food for some large cats (jaguar, cougars). Their unique forms and behaviors, including using their powerful forearms and claws to disrupt the very strong termite nests, add to the wonder of nature for humans.

While the giant anteater remains widely distributed, from Central America to Argentina, habitat destruction, as well as hunting for food and skin, collisions with cars, and collection for pets has led a population decline in many regions and it is considered to be Near Threatened in terms of its risk of extinction. 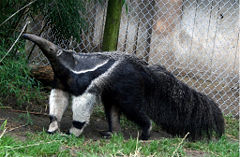 The giant anteater, Myrmecophaga tridactyla, is one of four extant species belonging to the suborder Vermilingua and technically known as anteaters. The other three are Cyclopes didactylus (pygmy or silky anteater), Tamandua tetradactyla (southern tamandua, collared anteater, or lesser anteater), and Tamandua mexicana (northern tamandua). All four species are truly toothless mammals of South and Central America that are highly specialized for feeding on ants and termites from their nest hills. They are characterized by a long tubular and tapered snout, very long worm–shaped tongue, and strong forelimbs with very sharp, long, and backwardly hooked claws.

The giant anteater has a long, thin head, small eyes, rounded ears, and a bushy and long (but not prehensile) tail. The worm-like tongue can extend more than 0.6 meters (2 feet) and has a width of only 12.5 millimeters (0.5 inch). The anteater can cover its tongue in a sticky saliva, allowing it to trap ants, and the tongue can be extended and withdrawn up to 150 times per minute. The giant anteater, pangolins, and tube-lipped nectar bat, while only distally related, all have tongues that are detached from their hyoid bone and extend past their pharynx deep into the thorax (Muchala 2006). This extension lies between the sternum and the trachea.

The giant anteater is covered with stiff, straw-like hair, which grows up to 40 centimeters (15.7 inches) long on the tail. Young have soft hair until they are mature. The giant anteater's prevailing color is gray or brown, with a broad black band, bordered with white, starting on the chest, and passing obliquely over the shoulder, diminishing gradually in breadth as it approaches the loins, where it ends in a point. All have this diagonal black and white shoulder stripe.

Despite its name, Myrmecophaga tridactyla, from the Greek meaning "three-fingered ant eater," the anteater has five digits on each foot; however the middle three digits of the forefeet have greatly enlarged claws. These are extremely strong and are used to break open ant and termite mounds in order to feed, as well as serve as an effective defense from predators. The anteater walks on its knuckles in order to protect them, giving it a shuffling gait. The forefeet also have one other smaller claw, and the rear feet have five small claws.

The giant anteater is one of only two taxa of mammals without any teeth even in a mature state (the Pangolins comprising the other). An anteater instead crushes insects it consumes using hard growths found on the inside of its mouth, and its muscular stomach. Sand and small rocks have also been found in anteaters' stomachs, suggesting that these are ingested to aid digestion (possible gastroliths).

The giant anteater is generally acknowledged to have a keen sense of smell, used to locate ants, but is thought to have poor sight and hearing.

Giant anteaters are sometimes mistaken for bears because of their claws and bushy fur.

Giant anteaters have been recorded as far north as Guatemala and Belize in Central America, and its range includes Honduras, Nicaragua, and Costa Rica, but it may be extinct now in Guatemala and Belize, and has disappeared from much of its Central American range (Porini et al. 2008). It is found in South America as far south as northern Argentina and northern Uruguay, but there also is concern that it may now be extinct in Uruguay (Porini et al. 2008). It is found in Bolivia, Brazil, Colombia, Ecuador, French Guiana, Guyana, Paraguay, Peru, Suriname, and Venezuela.

The anteater is mainly terrestrial, but is capable of climbing and is a strong and capable swimmer. It may be nocturnal or diurnal. In the wild, the giant anteater is primarily nocturnal or active at night near human settlements and diurnal or active during the day elsewhere. The giant anteater does not sleep in any fixed place, instead curling up in abandoned burrows and hollows. It covers its body with its long, bushy tail to sleep.

Giant anteaters eat ants, termites and soft-bodied grubs. Using the long, sharp claws on their forelimbs, they open insect colonies and tree trunks. They then use the tongue to collect the eggs, larvae, and adult insects. They only stay at one ant colony for a short period of time to avoid soldier ants, which increase over worker ants as the colony is disturbed; however, with the tongue flicking 150 times per minute, giant anteaters can consume a few thousand insects in minutes. They sometimes eat fruit and eggs.

The large size of the giant anteater makes them invulnerable to all but the largest of predators, but the jaguar (Panthera onca) and the cougar (Puma concolor) are known predators. Anteaters use their immense front claws to defend themselves from predators, but their typical response to threat is to run away. When threatened, it stands up on its hind legs, using its tail to aid balance, and may strike extremely rapidly with its claws or "hug" attackers much like a bear. An adult anteater is capable of fending off or even killing its main predators, including big cats such as the jaguar and the cougar. 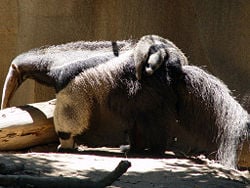 Giant anteater with offspring clinging to back.

Breeding occurs year-round in captivity and the wild, though seasonal breeding times have been reported in portions of their range. Gestation is approximately 190 days, after which females give birth to a single young that weighs about 1.3 kilograms (2.8 pounds). Females give birth standing up and immediately the young anteater climbs onto her back. Young are born with a full coat of hair and adult-like markings. Inter-birth intervals can be as low as nine months. Sexual maturity is reached between 2.5 and 4 years.

Most communication among giant anteaters occurs between young and their mothers or during fighting. Sounds consist of snorts, sniffs, and hisses, as well as roaring during fights.

Despite being widespread geographically, since 2006 the giant anteater has been listed as Near Threatened by the International Union for Conservation of Nature and Natural Resources (IUCN). There are now many records of large declines and population extirpation in various areas, especially in Central America and the southern parts of its range. Contributing to concern is the low reproductive rates, the dietary specificity, and the threats of habitat degradation in many parts of its range (Porini et al. 2008).

It is estimated that may be as few as 5,000 left in the wild, and only 90 live in zoos across the United States. Giant anteaters are listed as Appendix II by the Convention on International Trade in Endangered Species (CITES). Appendix II is defined as a species not necessarily threatened with extinction but one that should be controlled in trade to avoid overuse.

Retrieved from https://www.newworldencyclopedia.org/p/index.php?title=Giant_Anteater&oldid=1097331
Categories:
Hidden category:
This page was last edited on 24 January 2023, at 07:42.
Content is available under Creative Commons Attribution/Share-Alike License; additional terms may apply. See Terms of Use for details.