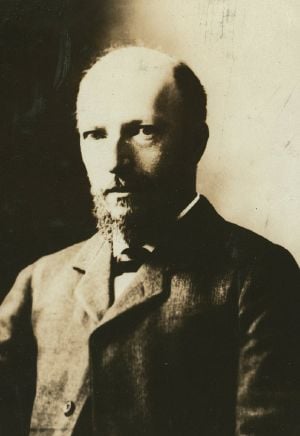 Adler developed his thoughts based upon Kantian ethics and American transcendentalism developed by Ralph Waldo Emerson and Henry David Thoreau. Adler found ethics as the common ground for and at the root of diverse religions, spiritual doctrines, and humanist thoughts. While Adler understood the values of religious teachings, he found adherence to dogmas and sectarianism non-essential to the teachings of founders and leaders of religions such as Jesus, Jewish prophets, Buddha, and others. Adler, thus, developed a non-theistic religious humanism, and initiated a number of social reforms. He was particularly concerned with education and social conditions of the poor and underrepresented classes of people. He established the Ethical Culture Society which initiated the Visiting Nurse Service, the first free kindergarten for workers, and a number of other projects and programs. Adler also served on the Civil Liberties Bureau, which later became the American Civil Liberties Bureau and then the American Civil Liberties Union (ACLU).

He was born in Alzey, Germany, the son of a rabbi, Samuel Adler. The family immigrated to the United States from Germany when Felix was six years of age on the occasion of his father's receiving an appointment as head rabbi at Temple Emanu-El in New York.

Felix Adler graduated from Columbia University in 1870, and moved to Germany where he received a doctorate from Heidelberg University. Starting in 1874, he spent two years at Cornell University in the Department of History as Professor of Oriental Languages and Hebrew before his "dangerous attitude" caused him to leave.

He returned to New York and preached some sermons at the Temple Emanu-El in New York City where his father was still the head rabbi. He was noted for omitting reference to God in any of his Sermons, an unorthodox approach which made him suspect by many in the New York Jewish community and ended any thought of him succeeding his father.

Did you know?
Felix Adler founded the Society for Ethical Culture, a nontheistic religious movement

Then, at the age of twenty-four, Adler founded the New York Society for Ethical Culture in 1876. His sermon on May 15, 1876, is considered to be the date on which the religion he called Ethical Culture was established. His lectures before this society on Sundays in New York were well known and attended, and were routinely reported on in the New York Times. Adler's belief in deed rather than creed led his society to foster two innovative projects: Visiting Nursing and Free Kindergarten. In 1877, the New York Society of Ethical Culture sponsored Visiting Nursing, where nurses, and doctors if necessary, visited the homebound sick in poor districts. This service was eventually incorporated into the New York City health system. A year later, in 1878, a Free Kindergarten was established as a tuition-free school for working people's children. (Ironically, what began as a free school for the benefit of the poor has become, according to a 2007 Forbes article, one of the most expensive and exclusive preschools in the United States, with tuition in 2007 at $30,440 USD per year. Despite sharing a building on Central Park West in New York City, the school is no longer affiliated with the Ethical Culture Society.) It evolved over time into the Ethical Culture Fieldston School.

In 1902, Adler was given the chair of political and social ethics at Columbia University, which he held until his death in 1933. In 1928, Adler became president of the Eastern division of the American Philosophical Association.

As a member of the New York State Tenement House Commission, Adler was concerned not only with overcrowding but also by the increase in contagious disease caused by overcrowding. Though not a proponent of free public housing, Adler spoke out about tenant reform and the rents which he considered exorbitant. Jacob Riis wrote that Adler had "clear incisive questions that went through all subterfuges to the root of things."

In 1885, Adler and others created the Tenement House Building Company in order to build "model" tenements that rented for $8–$14/month. By 1887 six model buildings had actually been erected on the Lower East Side of Manhattan for the sum of $155,000. Even though critics favored restrictive legislation for improving tenement living, the model tenement was a progressive step forward.

By the late 1890s, with the increase in international conflicts, Adler switched his concern from domestic issues to the question of American foreign policy. While some contemporaries viewed the 1898 Spanish American War as an act to liberate the Cubans from Spanish rule, others perceived the U.S. victories in the Caribbean and the Philippines as the beginning of an expansionist empire. Adler at first supported the war but later expressed anxiety about American sovereignty over the Philippines and Puerto Rico, concluding that an imperialistic rather than a democratic goal was guiding U.S. foreign policy. Ethical Culture affirms "the supreme worth of the person" and Adler superimposed this tenet on international relations, believing that no single group could lay claim to superior institutions and lifestyle.

Unlike many of his contemporaries during World War I, Adler didn't feel that the defeat of Germany alone would make the world safe for democracy. Peace could only be achieved, he thought, if the representative democratic governments remained non-imperialistic and if the arms race was curbed. As a result, Adler opposed the Treaty of Versailles and the League of Nations. As an alternative, Adler proposed a "Parliament of Parliaments" elected by the legislative bodies of the different nations and filled with different classes of people, rather than special interests, so that common and not national differences would prevail.

While the Ethical Culture movement which Adler founded was open to people of diverse beliefs, Adler himself developed and promoted his own vision of an essentially Kantian moral philosophy which prized public work and the use of reason to develop ultimate ethical standards.

Although Adler recognized the values of religious and spiritual teachings, he considered adherence to religious dogmas and sectarian perspectives harmful to and non-essential to the essence of religiosity, which Jesus, Jewish prophets, Buddha, and other religious leaders commonly exhibited in their deeds, teachings, and lives. Adler argued that people's interpretations of religions were to be respected as religious things in themselves.

Adler defined religion not by creed, prayer, and dogma. Among his various formulations of religion, in Creed and Deed, he recognized the feeling of "sublime" as the "root of the religious sentiment" which is "awakened by the mysterious:"

Adler published such works as Creed and Deed (1878), Moral Instruction of Children (1892), Life and Destiny (1905), The Religion of Duty (1906), Essentials of Spirituality (1908), An Ethical Philosophy of Life (1918), and The Reconstruction of the Spiritual Ideal (1925). He made use of the ideas from the religion to which he was born, and the philosophies of Kant and Ralph Waldo Emerson, mixed with certain socialistic ideas of his time.

Well known as a lecturer and writer, Adler served as rector for the Ethical Culture School until his death in 1933. Throughout his life he always looked beyond the immediate concerns of family, labor, and race to the long-term challenge of reconstructing institutions like schools and government to promote greater justice in human relations. Within Adler's ethical philosophy, cooperation rather than competition remained the higher social value.