Ethical Culture is a nontheistic religion established by Felix Adler in 1876. The Ethical Culture Movement is a non-sectarian, ethico-religious and educational movement. Individual chapter organizations are generically referred to as Ethical Societies, though their names may include "Ethical Society," "Ethical Culture Society," "Society for Ethical Culture," or other variations on the theme of "Ethical." Ethical Culture is based on the premise that moral tenets are not necessarily grounded on religious or philosophical dogma, but have an independent validity of their own. Adler had three aims for the Society for Ethical Culture which he founded in New York in 1876: sexual purity, devotion of surplus income to the improvement of the working classes, and continued intellectual development. Functionally, Ethical Societies are similar to churches or synagogues, conducting Sunday morning meetings, offering moral instruction for children and teens, doing charitable work and conducting weddings, baby namings, and memorial services. Individual Ethical Society members may or may not believe in a deity or regard Ethical Culture as their religion. Adler made use of the ideas from his religion, the philosophy of Kant and Ralph Waldo Emerson, mixed with certain socialistic visions of his time. He believed that the concept of a personal god was unnecessary and that the human personality is the central force of religion, that different people's interpretations of religions were to be respected as religious things in themselves.

In adhering to its social and moral imperatives, the Ethical Culture Society initiated a number of projects to improve the lives of the working class, including a Visiting Nursing Service, and the first free kindergarten in the United States for the children of working people. The Society was also instrumental in the formation of the National Child Labor Committee and in calling for the formation of the NAACP. The Chicago Society organized The Bureau of Justice, the organization that preceded the Legal Aid Society.

Did you know?
The Ethical Culture movement is founded on the premise that moral tenets are not necessarily grounded in religious or philosophical dogma

The Ethical Culture movement is founded on the premise that moral tenets are not necessarily grounded in religious or philosophical dogma. Adler contended that Judaism and Christianity were mistaken in making ethics dependent on religious doctrine. Instead, he began with Immanuel Kant’s principle that every human being is an end in himself and is worthwhile on his own account. Adler had three aims for the Society for Ethical Culture; sexual purity, devotion of surplus income to the improvement of the working classes, and continued intellectual development.

While Ethical Culturists generally share common beliefs about what constitutes ethical behavior and the good, individuals are encouraged to develop their own personal understanding of these ideas. This does not mean that Ethical Culturists condone moral relativism; ethical principles are viewed as being related to deep universal truths. However, it is recognized that complexities render the understanding of ethical nuances subject to continued dialogue, exploration, and learning.

Though the founder of Ethical Culture, Felix Adler, was a transcendentalist, Ethical Culturists may have a variety of understandings as to the theoretical origins of ethics. The founding of Ethical Culture resulted from the observation that, too often, disputes over religious or philosophical doctrines have distracted people from actually living ethically and doing good. The motto of the movement is "Deed before creed."

Functionally, Ethical Societies are similar to churches or synagogues. Ethical Societies typically have Sunday morning meetings, offer moral instruction for children and teens, and do charitable work and social action. They may offer a variety of educational and other programs. They conduct weddings, commitment ceremonies, baby namings, and memorial services.

The movement does consider itself a religion in the sense that:

Religion is that set of beliefs and/or institutions, behaviors and emotions which bind human beings to something beyond their individual selves and foster in its adherents a sense of humility and gratitude that, in turn, sets the tone of one's world-view and requires certain behavioral dispositions relative to that which transcends personal interests. (Arthur Dobrin, Leader Emeritus of the Long Island Ethical Humanist Society)[1]

It is a chief belief of Ethical religion that if we relate to others in a way that brings out their best, we will at the same time elicit the best in ourselves. By the "best" in each person, we refer to his or her unique talents and abilities that affirm and nurture life. We use the term "spirit" to refer to a person's unique personality and to the love, hope, and empathy that exists in human beings. When we act to elicit the best in others, we encourage the growing edge of their perhaps as-yet untapped but inexhaustible worth.[2]

Since around 1950 the Ethical Culture movement has been increasingly identified as part of the modern Humanist movement. Specifically, in 1952, the American Ethical Union, the national umbrella organization for Ethical Culture societies in the United States, became one of the founding member organizations of the International Humanist and Ethical Union. Ethical Culture can be described as a form of religious humanism, rather than secular humanism.

Felix Adler (August 13, 1851 – April 24, 1933), a Jewish rationalist intellectual and founder of the Society for Ethical Culture, was born the son of a Hebrew rabbi in Alzey, Germany. The family immigrated to the United States in 1857, when Adler’s father received an appointment as head rabbi at Temple Emanu-El in New York.

Felix Adler graduated from Columbia University in 1870 and moved to Germany where he received a doctorate from Heidelberg University. From 1874 to 1876 he was Professor of Oriental Languages and Hebrew in the Cornell University Department of History. He returned to New York and preached some sermons at the Temple Emanu-El in New York City where his father was still the head rabbi. He omitted reference to God in any of his Sermons, an unorthodox approach which made him suspect in the New York Jewish community.

In 1902 Adler was given the chair of political and social ethics at Columbia University, which he held until his death in 1933. Well known as a lecturer and writer, Adler served as rector for the Ethical Culture School until his death in 1933. Throughout his life, he always looked beyond the immediate concerns of family, labor, and race to the long-term challenge of reconstructing institutions such as schools and government to promote greater justice in human relations. Adler's ethical philosophy gave greater social value to cooperation than to competition.

Among his writings are Creed and Deed (1877), The Moral Instruction of Children (1892), The World Crisis and Its Meaning (1915), An Ethical Philosophy of Life (1918), and The Reconstruction of the Spiritual Ideal (Hibbert lectures at Oxford, 1923).

The movement was initiated in 1876 by Felix Adler in New York City with the founding of the New York Society for Ethical Culture.

The society adopted as the condition of membership a positive desire to uphold by example and precept the highest ideals of living and to aid the weaker to attain those ideals. The aims of the society were stated as follows:

The members of the society were free to follow and profess whatever system of religion they chose, the society confining its attention to the moral problems of life. A central precept was "Always act so as to elicit the best in others, and thereby in yourself."

In adhering to its social and moral imperatives, the Society quickly initiated two major projects in 1877. First was the establishment of the District Nursing Service, a program which sent nurses, and doctors if necessary, to visit the homebound sick in poor districts and was a precursor of the Visiting Nurse Service,[3] which is still a service of the New York City health system.

In 1878, the Society established the first free kindergarten in the United States for the children of working people and was established as a tuition-free school. In 1880 the Workingman's School was chartered. It was a model institution for general and technical education which used the kindergarten method in the higher branches of study. Each of its teachers was a specialist as well as an enthusiast in his subject; the Socratic method was followed. Pupils over seven were instructed in the use of tools. In 1895, the School was reorganized, becoming The Ethical Culture Schools. An upper school, The Fieldston School, was added in 1928.

Under Dr. Adler's direction, the Society worked to improve conditions in tenement houses, created the Mothers' Society to Study Child Nature (later the Child Study Association), and helped to found the Visiting and Teaching Guild for Crippled Children in 1889. The Society was also instrumental in the formation of the National Child Labor Committee and in calling for the formation of the NAACP. The Chicago Society organized The Bureau of Justice, the organization that preceded the Legal Aid Society.

According to Justice Sandra Day O'Connor the pro bono tradition among lawyers started with a speech by Supreme Court Justice Louis Brandeis at an Ethical Society in 1905.

Originally agnostic in tone, the society gradually developed into a simple, human brotherhood, united by ethical purpose and a humanistic outlook. In some parts of Europe, it acquired an influence in distinctively Christian circles. Its chief supporters in New York and Philadelphia were Jews, as was its founder and leader, though the society did not in any degree bear the stamp of Judaism.

Albert Einstein was a supporter of Ethical Culture. For the seventy-fifth anniversary of the New York Society for Ethical Culture he noted that the idea of Ethical Culture embodied his personal conception of what is most valuable and enduring in religious idealism. Humanity requires such a belief to survive, Einstein argued, saying, "Without 'ethical culture' there is no salvation for humanity."

Other leaders in the Ethical Culture movement were W.M. Salter, Stanton Coit, and Walter L. Sheldon. 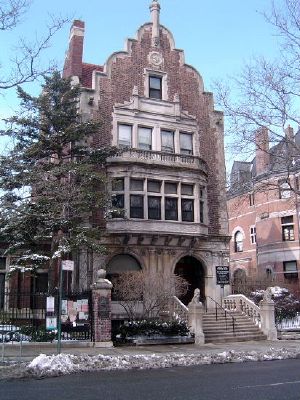 The largest concentration of Ethical Societies is in the New York metropolitan area, including a dozen or so Societies in New York and New Jersey.

A similar movement was started in Berlin and today a society exists at Frankfurt am Main. Societies were established in Cambridge and London, United Kingdom but the only remaining society in that country is the South Place Ethical Society, based at Conway Hall, London, and controlled by the British Humanist Association. The movement also spread to France, Austria, Switzerland, Japan, and India.

The tax status of Ethical Societies as religious organizations has been upheld in court cases in Washington, D.C. (1957), and in Austin, Texas (2003). The Texas State Appeals Court said of the challenge by the state comptroller, "the Comptroller's test [requiring a group to demonstrate its belief in a A Supreme Being fails to include the whole range of belief systems that may, in our diverse and pluralistic society, merit the First Amendment's protection." The D.C. Federal court declared, with regard to status as a religious institution, "if it looks, walks and quacks like a duck, it’s a duck."