Emil Brunner (December 23, 1889 – April 6, 1966) was an eminent and highly influential Swiss theologian. Along with Karl Barth, he is commonly associated with Neo-orthodoxy or the dialectical theology movement.

After being educated in both Europe and the United States, Brunner became professor of systematic theology at the University of Zurich and soon developed a strong reputation for his challenge to the prevailing liberal theology of his day. While rejecting the blind faith of fundamentalism, Brunner emphasized the need for personal repentance and a direct encounter with God through Jesus Christ. He, thus, reaffirmed the basic Christian faith, while also confronting the intellectual challenges which had produced what he saw as a major crisis in civilization.

At first a close friend and ally of Karl Barth, Brunner split with Barth over the question of grace, affirming a less devastating effect of original sin on human nature than Barth did. Especially during their earlier careers, he was better known than Barth in the United States. Although Brunner's optimism about human nature and his reticence to affirm the inerrancy of the Bible made his views suspect among later evangelical and fundamentalist Christians, he remains one of the most influential theologians of the twentieth century. 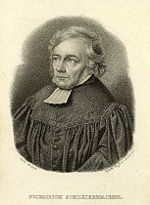 Brunner was a strong critic of the liberal theology of Friedrich Schleiermacher.

Emil Brunner was born near Zurich in 1889. He studied at both the universities of Zurich and Berlin, receiving his doctorate in theology from Zurich in 1913. The title of his doctoral dissertation was: The Symbolic Element in Religious Knowledge. Brunner served as pastor from 1916 to 1917, in the mountain village of Obstalden in the Canton of Glarus. He spent a year in New York, at Union Theological Seminary studying (1919–1920), where he was the seminary's first exchange student after World War I.

In 1921, Brunner wrote what he considered a second dissertation: Experience, Knowledge, and Faith. Soon, another book followed: Mysticism and the Word. This work was a devastating critique of the liberal theology of Friedrich Schleiermacher.

Brunner was rewarded for his literary efforts with the appointment as the professor of Systematic and Practical Theology at the University of Zurich from 1924-1955. In the next few years his reputation continued to increase, particularly with the publication of two more books, the first, The Philosophy of Religion from the Standpoint of Protestant Theology, and second, The Mediator.

In 1932, following a few years of receiving invitations to visit and lecture across Europe and the United States, which he accepted, Brunner wrote God and Man and The Divine Imperative. Brunner continued his theological output with Man in Revolt and Truth as Encounter in 1937. In 1938–1939, he again visited the U.S., when he agreed to a visiting professorship at Princeton Theological Seminary.

He returned to Europe prior to World War II and was an outspoken opponent of Nazism. Following the war, Brunner was invited to give the distinguished Gifford Lectures at the University of St. Andrews, (1946–1947) in Scotland, the title of his lectures being Christianity and Civilization.

Brunner rejected liberal theology's portrait of Jesus Christ as anything less than God incarnate, insisting that both the Incarnation and Jesus' atoning death and resurrection were central to salvation. He thus opposed the propositions of both Schleiermacher and Ritschl, while joining with Karl Barth in the promotion of Neo-orthodoxy.

He later broke with Barth, however, on the question of grace, affirming that humans were not totally depraved by the Fall, and that a "point of contact" remained between God and humans even without the grace of salvation through Jesus. Some observers see Brunner's theology of grace as attempting to find a middle position within the ongoing Arminian and Calvinist debate, holding that Christ stood between God's sovereign approach to humankind and the free acceptance of God's gift of salvation.

After 1937, Brunner's theology was strongly influenced by the theology of Jewish theologian Martin Buber. Brunner thus stressed that the Christian revelation is a type of personal encounter with God. The Divine-Human Encounter (1937), Man in Revolt (1938), and Revelation and Reason (1941) all show Buber's influence.

While Brunner insisted on the unique salvific value of the Christian faith, he was also strongly interested in a dialog between Christianity and secular life. He, thus, strongly opposed Nazism and Communism as threats both to religious freedom and western civilization.

Brunner's 1928 lecture series published as The Theology of Crisis is widely considered to be one of the best expressions of Neo-orthodox theology. Here, Brunner identified five main themes of the classical protest against Protestant liberalism.

Brunner and Barth, though originally friends and colleagues, came to differ dramatically over their theological views. Barth once described their relationship as similar to that of a whale and an elephant.

After 1934, their friendship dissolved, as Barth wrote an emphatic article declaring "Nein!" to what he characterized as Brunner's "natural theology." Brunner responded with his own strongly worded attack on Barth, and the two former friends did not meet for 30 years after these incidents.

Long before Barth's name was known in the U.S., Brunner was considered to be the chief proponent of the new "dialectical theology," better known as Neo-orthodoxy. In the U.S., Brunner's books were translated much more quickly than Barth's works.

Considered by many to be the minor partner in the uneasy relationship, Brunner once acknowledged that the only theological genius of the twentieth century was Barth.

Brunner holds a place of prominence in Protestant theology in the twentieth century as one of the most important figures of Neo-orthodoxy. However, although Brunner re-emphasized the centrality of Christ, evangelical and fundamentalist theologians tended to reject some of Brunner's other teachings, such as his downplaying of the doctrine of original sin, his dismissal of certain miraculous elements within the Scriptures, and his questioning of the usefulness of the doctrine of the inspiration of the Bible.

Nevertheless, he and Barth effectively challenged nineteenth century liberal theology by exposing it as ultimately a human effort to live a Godly life by emulating Jesus, rather than as God's effort to reach humans through his own self-revelation in Christ. Brunner thus holds a place of prominence in Protestant theology in the twentieth century.

Retrieved from https://www.newworldencyclopedia.org/p/index.php?title=Emil_Brunner&oldid=1047373
Categories:
Hidden category:
This page was last edited on 31 December 2020, at 08:14.
Content is available under Creative Commons Attribution/Share-Alike License; additional terms may apply. See Terms of Use for details.