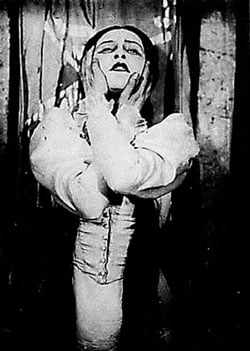 Actress Hana Rovina portrays a possessed woman in The Dybbuk

In Kabbalah and European Jewish folklore, a dybbuk is a spirit of a dead person that attaches itself to a person on earth. The word "dybbuk" is derived from a Hebrew term meaning "attachment."

According to kabbalistic tradition, a soul that has not been able to fulfill its function in its lifetime is sometimes given another opportunity to do so in the form of a dybbuk. Dybbuks seek out people who face similar challenges or circumstances to themselves and attach themselves to their bodies. Dybbuks are said to have escaped from Gehenna, the Jewish purgatory, or even to have been turned away from Gehenna for transgressions too serious for the soul to be allowed entrance, such as suicide. A good spirit or ibbur may also possess a person for a while, but will leave of its own accord once it has accomplished a goal of mutual benefit with its host. An evil dybbuk, however, often leaves only after being satisfied or exorcised.

While Jewish tradition regarding good and evil spiritual influences on living humans dates back to ancient times, fascination with dybbuks became particularly widespread in Jewish culture of the sixteenth century and later. In 1914, Jewish playwright S. Ansky wrote a significant Yiddish play called The Dybbuk. The story relates the plight of a young bride possessed by a dybbuk on the eve of her wedding. Leonard Bernstein later composed a ballet based on Ansky's play. Although belief in dybbuks has diminished in recent times, in some Jewish communities their existence is considered a reality. Some rabbis still engage in exorcism rituals to help free people thought to be afflicted with a dybbuk. 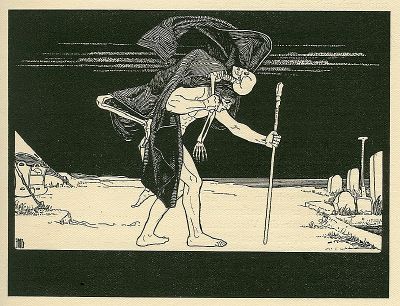 While stories of evil spirits and exorcism are relatively rare in the Old Testament, a famous instance of spirit possession is related in the story of King Saul, who was possessed by an "evil spirit form the Lord" after losing God's support as king. According to 1 Samuel 16:23 "Whenever the evil spirit from God came upon Saul, David would take his harp and play. Then relief would come to Saul; he would feel better, and the evil spirit would leave him." In the apocryphal Book of Tobit, a beautiful bride name Sarah is plagued by a demon who has killed all seven or her husbands on her wedding night. She is finally liberated after the angel Raphael instructs Tobit (Tobias) to marry Sarah and drive away the demon by burning a fish's liver and heart.

Exorcisms were also done at Qumran by the Essene branch of Judaism. Jesus of Nazareth was a powerful Jewish healer and exorcist, as evil spirits were believed to be the source of much illness. Jewish sources report exorcisms being done in the first century C.E. by administering drugs with poisonous root extracts or by offering sacrifices (Josephus, "B. J." vii. 6, § 3; Sanh. 65b).

While not denying the influence of spirits, Pharisaism insisted that the observance of the Law was the best defense against demons (Ber. 5a; Num. 48b). In addition, the tefillin were regarded by some Jews as amulets of protection (Targ. Cant. viii. 3; Gen. R. xxxv.; Men. 33b). Protection against evil spirits was also provided by the posting of a mezuzah at the door of one's home and the reading of certain prayers such as the Shema.

A Talmudic injunction affirms the presence of both good an evil spirits in human affairs: "The wicked are accompanied by the angels of Satan; the righteous by the angels of God" (Tosef., Shab. xvii. 2-3; compare Book of Jubilees, x. 6). "Every observance of the Law is a protection" (Soṭah 21a), and those bent upon doing some sacred work need fear no evil powers (Pes. 8b). A priest's blessing also is a protection against malign influences (Num. R. xi).

The reality of demons was never questioned by the Talmudists and most other rabbinic commentators. Jewish law accepted them as a fact (see Shulchan Aruch, Oraḥ Ḥayyim, 4, 2 et seq). Nor did most of the medieval Jewish thinkers question their reality. Only the philosophers Maimonides and Ibn Ezra denied their existence.

As early as geonic times (sixth through eleventh centuries C.E.) a special incantatory formula was recited before drinking from the cup of the Sabbath wine against "the demon Puta, the prince of forgetfulness." It commanded "by the power of the holy names of the angels Arimaz, Arimas, Ansisel, and Petahel, he may be cast upon the high mountains Alburz" ("Seder Rab Amram," i. 31). Many rites and prayer formulas were introduced to avert the malign influence of evil spirits, and special formulas for the dying were prescribed in the Kabbalah by which all the demons that may have been created or attracted by the impure thoughts and actions of the dying person, brought under control. Amuleta, incantations, prayers, and other formulas became widespread. Women were sometimes banned from going to a cemetery because demons might be attracted to them sexually, and the shofar was sometimes blown at funerals to ward off the evil spirits there (see Yalḳ., Ḥadash, l.c. 47).

The tradition of the Kabbalah tended to make evil spirits part of the cosmic pattern in which pure and impure powers fill the world and divide it between the Holy One and the serpent Samael (see Zohar, Bereshit, 47b, 53 et seq., 169b et seq., 174b). Many prayers for the warding off of demonic influences found a place in the Jewish liturgy and the Shulḥan 'Aruk. A special incantation is prescribed invoking the protection of guardian angels against the evil spirits haunting privies (see Ber. 60b; compare Ber. 62a and Oraḥ Ḥayyim, 13, 1). Prayers recited before retiring to bed were also intended to guard the sleeper against demons (Ber. 4a; Shebu. 15b). At the close of the Sabbath, evil spirits were thought to swarm everywhere, poisoning the wells and doing harm in many ways (see Pesiḳ. R. xxiii.; Sheeltot, Bereshit; Tanya, xxi.; Ha-Manhig, Shabbat, 65; Solomon b. Adret, Responsa, 1119; Kol Bo, xli).

Did you know?
Belief in dybbuks, souls of the dead that attach themselves to living persons on earth, became widespread in the sixteenth and seventeenth centuries

While belief in evil spirits, possession, and exorcism goes back to ancient times, a widespread belief in dybbuks as such became evident especially in the sixteenth and seventeenth centuries. The kabbalist Isaac Luria (1534–1572), popularized the use of incantations, both for mystical purposes and to ward off demons ("Tiḳḳune Shabbat"). Luria's influential works emphasized the correlation between the physical and spiritual worlds and the cooperation of spiritual beings with humans on earth. He described this relationship as a method by which imperfect souls could transmigrate or cooperate with men on earth to attain spiritual perfection. Other kabbalistic writers developed the idea of the dybbuk attaching itself to the body of a human being on earth.

In kabbalistic texts and Jewish folklore, a dybbuk is believed to be the dislocated soul of a dead person returned from Gehenna, the Hebrew term for the spiritual world below heaven. Occasionally, a soul that has not been able to fulfill its purpose on earth is given another opportunity to do so as a dybbuk. Such a spirit seeks out a living person in a similar situation to itself during its lifetime and attaches itself to that person. Thus, a dybbuk is the soul or spirit of a dead human being and so can be distinguished from a demon, a spirit or supernatural being such as a malevolent fallen angel.

Possession is not always a bad or unhealthy thing. While dybbuks are evil there is also beneficial possession known as sod ha'ibbur, Hebrew for "mysterious impregnation." A good ibbur acts as a kind of "spiritual guide" to help the person through his or her current trials and tribulations, while simultaneously accomplishing its own purpose and thus perfecting itself. This kind of spirit is thought to have struggled and gained victory over what the host himself has not yet been able to overcome. In this case the spirit is "lent" to the host from the spirit world as a guide or guardian angel. In such cases, the ibbur does not need to be exorcised, but leaves the host once its mission is accomplished. However, the loss of the ibbur can sometimes result in clinical depression, as the host misses the energy and inspiration it formerly received.

In the case of an evil dybbuk, however, the spirit peruses its own negative inclinations and may attempt to cause its host to make the same mistakes and sins it committed during its own lifetime. A dybbuk is thought to be drawn to a person who whose spirit and body are not fully connected to each other. Examples include severe depression, psychosis, or the use of mind-altering drugs. The dybbuk is particularly attracted to a person who is struggling with the same challenges or feelings it did. Thus, a dybbuk who died alone and resentful might return to a person in a similar circumstance and make her life more miserable that ever. A dybbuk who was a heavy drinker during his lifetime might tempt his host to become habitually drunk. Dybbuks of a more neutral type might attach themselves in order to gain satisfaction for past injustices.

In Hasidic tradition, a particularly powerful miracle-working rabbi known as a baʿal shem (master of the name) could expel even the most evil dybbuk through a rite of exorcism. However, exorcism of a dybbuk today normally normally involves nine Jews plus the rabbi. The ceremony is not normally one of overpowering the dybbuk, but of first shocking it, and then dialoging with it in an attempt to cause it to see that it needs to leave.

The group surrounds the possessed victim and repeatedly recites the comforting, protective verses of Psalm 91. The rabbi proceeds to blow a shofar (ram's horn trumpet) in a specific pattern. This "shocks" both the possessed person and the dybbuk, causing a loosening between the two which enables each entity to be addressed separately. Once this is accomplished, the rabbi enters into a dialog with the dybbuk to discover its purpose. The group then proceeds to heal it through dialog and prayer, and this is also done for a person who is possessed. Sometimes the legitimate needs of the dybbuk must be satisfied before it agrees to leave.

While many Jews today no longer accept the idea of dybbuks and their influence, in some communities, especially (but not only) among Hasidic Jews, ceremonies to liberate people from dybbuk possession are still performed.

The Dybbuk was a 1914 play by S. Ansky, relating the story of a young bride possessed by a dybbuk on the eve of her wedding. It is considered a seminal work in the history of Jewish drama and played an important role in the development of Yiddish theatre. The play was based on years of research by S. Ansky, who traveled between Jewish shtetls in Russia and the Ukraine, documenting folk beliefs and stories of the Hassidic Jews. Leonard Bernstein composed a ballet based on the play.

Retrieved from https://www.newworldencyclopedia.org/p/index.php?title=Dybbuk&oldid=1061847
Categories:
Hidden category:
This page was last edited on 24 December 2021, at 20:52.
Content is available under Creative Commons Attribution/Share-Alike License; additional terms may apply. See Terms of Use for details.