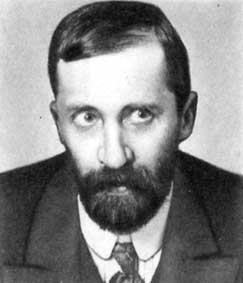 Dmitry Sergeyevich Merezhkovsky, Дмитрий Сергеевич Мережковский (August 14, 1865 – December 9, 1941) was one of the earliest and most eminent ideologues of Russian Symbolism. His wife Zinaida Gippius, a poet like him, ran a fashionable salon in St. Petersburg. Both he and his wife were freemasons. His interest in spirituality played an important role in the creation of Russian Symbolism and in the renewed spiritual interest of the Russian intelligentsia in the late nineteenth and early twentieth century. Like many intellectuals, he initially embraced the Russian Revolution of 1917 only to be disappointed.

Born in 1865, Dmitri was the sixth son of a Privy Councillor who had access to the Tsarist court. From 1884 until 1889 he studied History and Philology at the University of St. Petersburg, becoming fluent in several languages. His dissertation was on Michel de Montaigne.

In 1888 he published his first volume of poetry and met his wife, Zinaida Gippius, in Borjomi in the Caucausus. They married the following January and settled in St. Petersburg. He and his wife supported themselves modestly through their writing, and their salon would later become a center of the Silver Age of Russian poetry. Merezhkovsky is credited with first articulating the basic tenets of Russian Symbolism with his essay On the Causes of the Decline and on the New Trends in Contemporary Russian Literature (1893).

Merezhkovsky was more than a poet. His literary production spanned the whole range of genres. His trilogy Christ and Antichrist represented a renewed interest in the historical novel in Russia. This trilogy gave expression to his theological concerns. A trilogy of historical plays, "Pavel I (1908),"Alexander I (1911)" and "December the Fourteenth (1918)," dealt with the events that led to the Decembrist Revolt. As a critic, his studies of Nikolai Gogol, Gogol and the Devil, and especially his study of Leo Tolstoy and Fyodor Dostoevsky, Tolstoy and Dostoevsky, were landmark modernist critical studies of nineteenth century Russian novelists.

After 1900 he and Zinaida, along with Dmitry Filosofov and Vasily Rozanov, were promoting a new religious consciousness through the group Bogoiskateli, or God-seekers. This group of "spiritual Christians" met with representatives of the Orthodox Church until 1903 when these meetings were banned by Konstantin Pobedonostsev, the arch conservative procurator of the Russian Orthodox Holy Synod. In 1901 they also founded The Religious-Philosophical Society which published Novyi put ("New Path") as its central organ. They lost a large portion of the readership following Pobedonostsev's ban. In 1904 publication of Novyi put was interrupted, as they departed on a trip across Russia, extending beyond the Volga river and meeting representatives of various mystical sects, many of whom Merezhkovsky had kept in touch with.

Between 1894 and 1905 Merezhkovsky wrote a trilogy of historical novels entitled The Death of the Gods (1894, on Julian the Apostate), Leonardo da Vinci (1896) and Peter and Alexis (1902) about Peter the Great and Tsarevich Alexis. Whilst providing a platform for the author's historical erudition, it invited scathing criticism from the underground magazine Osvobozhdenie:

"It would be convenient to ask the author: well, and the police department, the regulations on intensified control, the Moskovskie vedomosti, the Grazhdanin, Cossack whips and gallows and other attributes of protection, are they also objects of "mystical order"? Do they also contain the "unutterable secret of God"? We would like to say to gentlemen like Merezhkovskij: mysticism obliges. If the idea of monarchy is a mystical one and you are not promoting it in vain, not as a ringing phrase, but with fear and respect, then this conviction obliges you to fight with fury against the Russian police-order....You say that autocracy is a religious idea, but the defense of this idea is a matter for God, and not for the Police-department."

The defeat of the Imperial Russian Navy by the Imperial Japanese Navy led to the Russian Revolution of 1905, which Merezhkovsky saw as a religious event announcing a religious revolution, of which he declared himself the prophet. Merezhkovsky became an ardent supporter of the civil unrest, writing much revolutionary verse, particularly during his two-year stay in Paris.

While an erstwhile editor of Novyi put, Georgy Chulkov, turned to editing Nikolai Ryabushinsky's Zolotoe runo, Aleksandr Blok published his critique of Merezhkovsky's "psychological extremism" in this journal, after which Merezhkovsky no longer submitted material for Chulkov's journal. It became more and more became identified as a mouthpiece for Chulkov's Mystical Anarchism, which had been based to some extent upon his metaphysical views.

After the October Revolution, Merezhkovsky and Gippius hoped for the demise of Bolshevik rule, but after they learned of White Army commander Kolchak's defeat in Siberia and Denikin's defeat in the south of Russia, they decided to flee Petrograd. On December 24, 1919, together with their friend Dmitry Filosofov, and secretary V. Zlobin, they left the city as if going to present lectures to the Red Army regiments in Gomel, while in actuality, in January 1920 they defected to the territory occupied by Poland and settled for a while in Minsk. Here the Merezhkovskys lectured to the Russian immigrants and wrote political pamphlets in the Minsk Courier newspaper. With his wife he joined the Social Revolutionary Boris Savinkov in Poland as he headed an army of 20,000-30,000 Russians (largely POWs) for a march on Moscow. Mereshkovsky proclaimed that Jozef Pilsudski was fulfilling a messianic mission to free Russia. He was repeatedly nominated for the Nobel Prize in Literature, but his support for Hitler prevented him from winning the award.

Merezhkovsky was a seminal literary figure in modernist Russia. He helped to introduce Friedrich Nietzsche into Russian thought. His poetry and critical work also helped to initiate the important phase of Russian Symbolism. He also helped to reintroduce the historical novel after a period of neglect.