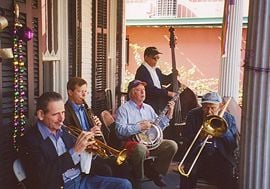 A traditional jazz band plays at a party in New Orleans in 2005. Shown here are Chris Clifton, on trumpet; Brian O'Connell, on clarinet; Les Muscutt, on banjo; Chuck Badie, on string bass; and Tom Ebert, on trombone.

Dixieland music is an early style of jazz which developed in New Orleans at the start of the twentieth century, and spread to Chicago and New York City in the 1910s. Dixieland jazz combined brass band marches, French quadrilles, ragtime, and blues with polyphonic improvisation by trumpet (or cornet), trombone, and clarinet over a "rhythm section" of piano, guitar, banjo, drums, and double bass or tuba. The classic Dixieland sound is created by one instrument playing a melody while the other lead instruments improvise around it, creating a chaotic yet cohesive sound. The music's heyday was in the late 1910s and 1920s, experiencing a revival in the late 1940-50s.

Many musicians prefer the term "traditional jazz" to Dixieland, considering the latter to denigrate the music as unsophisticated and also feeling that the term has racial overtones. As an American stylism, Dixieland music incorporated the cultural aspects of New Orleans jazz music of the early twentieth century. It combined several musical forms to inculcate a new form of jazz which leaped cultural boundaries toward a harmony and cooperation beyond the divisions of nationality, religion, race and ethnicity. The music of American-Creole composer Louis Moreau Gottschalk (1829-1869) included some of the earliest examples of the type of syncopation that would eventually become the hallmark of ragtime and Dixieland. As Gottschalk's biographer, Frederick Starr, points out, these rhythmic elements "anticipate ragtime and jazz by a half century."

Ragtime composers such as James Reese Europe and Scott Joplin were influenced greatly by Gottschalk's music. Europe's Clef Club Orchestra and Hell Fighters Band, as well as Will Marion Cook's Southern Syncopated Orchestra, were ensembles that made important contributions in the evolution of ragtime and Dixieland.

The early Dixieland style combined brass band marches, French quadrille dance music, ragtime, and blues with collective polyphonic improvisation in which musicians play several different complimentary melodies at the same time. While the instrumentation and size of bands could be very flexible, the "standard" band consists of a "front line" of trumpet (or cornet), trombone, and clarinet, with a "rhythm section" of at least two of the following instruments: guitar or banjo, string bass or tuba, piano, and drums. 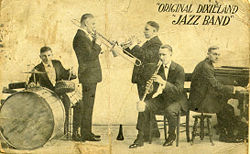 In the post WWI period, many jazz musicians moved from New Orleans to Chicago and created the style of Dixieland that flourished during the 1920s. Among them were: King Oliver, Louis Armstrong, Kid Ory, Sidney Bechet, and Jelly Roll Morton. As Dixieland evolved and moved to St. Louis, Detroit, and Chicago, it changed and took on different musical characteristics.

Cornetist, composer, and pianist Bix Beiderbecke was a key figure in making instrumental soloing a fixture of Dixieland jazz. Armstrong and others expanded on Beiderbecke's idea making solo improvisation a common practice of the genre. Also, Dixieland evolved into a more driving rhythmic style. Many Dixieland groups consciously imitated the recordings and bands of decades earlier. Other musicians continued to create innovative performances and new tunes.

Although the music had been played continuously since the early part of the twentieth century, the term Dixieland became widely used after the advent of the first million-selling hit records of the Original Dixieland Jass Band in 1917. Louis Armstrong's All-Stars was the band most popularly identified with Dixieland, although Armstrong's own influence runs through all of jazz.

Famous Dixieland hits of this era included "Basin Street Blues," "Bill Bailey, Won't You Please Come Home," "Alexander's Ragtime Band," "Potato Head Blues," and "The Sheik of Araby." Dixieland combos can also be heard as backing bands on records of other genres, from blues greats Ma Rainey and Bessie Smith to early country music such as that of Jimmie Rodgers. 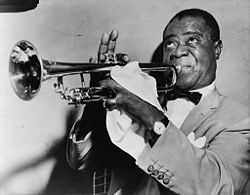 The swing era of the 1930s led to the end of many Dixieland musicians' careers. Only a few musicians were able to maintain popularity, and most retired. With the advent of bebop in the 1940s, the earlier group-improvisation style fell further out of favor with the majority of younger black players, while some older players of both races continued on in the older style. However, many beboppers particularly revered Louis Armstrong, and "quoted" fragments of his recorded music in their own improvisations.

There was a revival of Dixieland in the late 1940s and 1950s, which brought many semiretired musicians a measure of fame late in their lives as well as bringing retired musicians back onto the jazz circuit after years of not playing (e.g. Kid Ory). In the 1950s a style called "Progressive Dixieland" sought to blend traditional Dixieland melody with bebop-style rhythm. Steve Lacy played with several such bands early in his career. This style is sometimes called "Dixie-bop."

Some fans of post-bebop jazz consider Dixieland no longer to be a vital part of jazz, while some adherents consider music in the traditional style—when well and creatively played—every bit as modern as any other jazz style.

While the term Dixieland is still in wide use, the term's appropriateness is a hotly debated topic in some circles. For some, Dixieland is still the preferred label, especially bands on the USA's West coast and those influenced by the 1940s revival bands. However, others, especially New Orleans musicians and those influenced by the African-American bands of the 1920s, prefer terms like "classic Jazz" or "traditional jazz." Some of the latter consider Dixieland a derogatory term implying superficial hokum played without passion or deep understanding of the music. Furthermore, according to jazz writer Gary Giddins, the term Dixieland was widely understood in the early twentieth century as a code for "black music."

From the late 1930s on, black and mixed-race bands playing in a more traditional group-improvising style were referred to in the jazz press as playing "small-band Swing," while white and mixed-race bands such as those of Eddie Condon and Muggsy Spanier were tagged with the Dixieland label. Some black musicians today, young as well as old, play New Orleans jazz, traditional jazz, or small band swing that could also be called Dixieland, although black musicians often reject the term.

A number of early black bands used the term Creole (as with King Oliver's Creole Jazz Band), including some that were not actually ethnic Creoles. Some writers believe it makes sense to say only white musicians play "Dixieland." For them, "Dixieland" is essentially a white subset of "traditional jazz."

Today there are three main active streams of Dixieland or tradition jazz:

"Chicago style" is often applied to the sound of Chicagoans such as Eddie Condon, Muggsy Spanier, and Bud Freeman. The rhythm sections of these bands substitute the string bass for the tuba and the guitar for the banjo. Musically, the Chicagoans play in more of a swing-style 4-to-the-bar manner. The New Orleans-style preference for an ensemble sound is deemphasized in favor of solos. Chicago-style Dixieland also differs from its southern origin by being faster paced, resembling the hustle-bustle of city life. Chicago-style bands play a wide variety of tunes, including most of those of the more traditional bands plus many of the Great American Songbook selections from the 1930s by George Gershwin, Jerome Kern, Cole Porter, and Irving Berlin. Non-Chicagoans such as Pee Wee Russell and Bobby Hackett are often thought of as playing in this style. This modernized style came to be called Nicksieland, after Nick's Greenwich Village night club, where it was popular, though the term was not limited to that club.

The "West Coast revival" is a movement begun in the late 1930s by the Lu Watters Yerba Buena Jazz Band of San Francisco and extended by trombonist Turk Murphy. It started out as a backlash against the Chicago style, which was felt to be too close to swing. The repertoire of these bands is based on the music of Joe "King" Oliver, Jelly Roll Morton, Louis Armstrong, and W.C. Handy. Bands playing in the West Coast style use banjo and tuba in the rhythm sections, which play in a 2-to-the-bar rhythmic style. Watters emphasized reproducing the recorded sound of King Oliver's band with Armstrong on second cornet. Since the Oliver recordings had no drums, Watters omitted the drums as well, even though Oliver had drums when he played live. 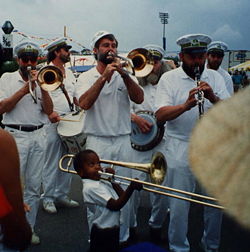 "Trombone Shorty" Troy Andrews and the Carlsberg Brass Band in 1991

The "New Orleans Traditional" revival movement began with the rediscovery of Bunk Johnson in 1942 and was extended by the founding of Preservation Hall in the French Quarter during the 1960s. Bands playing in this style use string bass and banjo in the rhythm section playing 4-to-the-bar and feature popular tunes and gospel hymns that were played in New Orleans since the early twentieth century, such as "Ice Cream," "You Tell Me Your Dream," "Just a Closer Walk With Thee," and some tunes from the New Orleans brass band literature. The New Orleans "revival" of the 1960s added a greater number of solos, in a style influenced by mid-century New York Dixieland combos, as this was less of a strain on some musicians of advanced years than the older New Orleans style with much more ensemble playing.

There are also active traditionalist scenes around the world, especially in Britain and Australia.

Famous traditional Dixieland tunes include: "When the Saints Go Marching In," "Muskrat Ramble," "Struttin' With Some Barbecue," "Tiger Rag," "Dippermouth Blues," "Milneburg Joys," "Basin Street Blues," "Tin Roof Blues," "At the Jazz Band Ball," "Panama," "I Found a New Baby," "Royal Garden Blues" and many others. All of these tunes were widely played by jazz bands of both races of the pre-WWII era, especially Louis Armstrong.

Some of the artists historically identified with Dixieland are mentioned in List of jazz musicians. 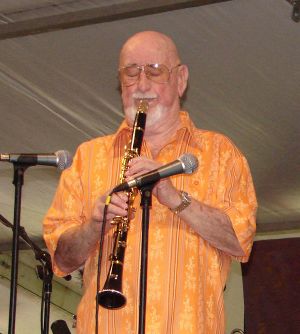 Some of the best-selling and famous Dixieland artists of the post-WWII era: 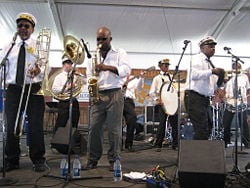 The Treme Band performs at the New Orleans Jazz and Heritage Festival in 2007.

There are several active periodicals devoted to traditional jazz: The Mississippi Rag, the Jazz Rambler, and the American Rag published in the US; and Jazz Journal International published in Europe.

These composers and musicians used the Dixieland style as a springboard in bringing such musical innovations to a regional genre. They placed New Orleans on a musical map to influence other areas of the United States as well as Europe, Asia, and the Americas.

James Reese Europe's Clef Club Orchestra was the first jazz band to play at Carnegie Hall in 1912. The concert had social and cultural implications as white society began to explore music of black musicians with greater interest. It is hard to overstate the importance of that event in the history of jazz in the United States. It was twelve years before the Paul Whiteman and George Gershwin concert at Aeolian Hall and 26 years before Benny Goodman's famed concert at Carnegie Hall. In the words of American composer and conductor, Gunther Schuller, Europe "…had stormed the bastion of the white establishment and made many members of New York's cultural elite aware of Negro music for the first time."

Retrieved from https://www.newworldencyclopedia.org/p/index.php?title=Dixieland&oldid=1074771
Categories:
Hidden category:
This page was last edited on 31 July 2022, at 04:25.
Content is available under Creative Commons Attribution/Share-Alike License; additional terms may apply. See Terms of Use for details.