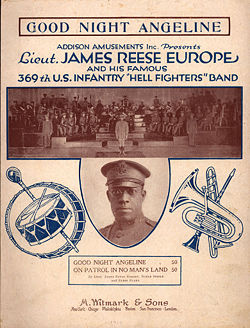 James Reese Europe (February 22, 1881 – May 9, 1919) was an American ragtime and early jazz bandleader, arranger, and composer. He was the leading figure on the African American music scene of New York City in the 1910s. Europe was born in Mobile, Alabama. His family moved to Washington, D.C., when he was 10 years old. He moved to New York in 1904.

In 1910, Europe organized the Clef Club, a society for African Americans in the music industry. In 1912, they made history when they played a concert at Carnegie Hall for the benefit of the Colored Music Settlement School in New York City. The Clef Club Orchestra was the first jazz band to play at Carnegie Hall. It is hard to overstate the importance of that event in the history of jazz in the United States. It was twelve years before the Paul Whiteman and George Gershwin concert at Aeolian Hall and twenty-six years before Benny Goodman's famed concert at Carnegie Hall. In the words of Gunther Schuller, Reese "…had stormed the bastion of the white establishment and made many members of New York's cultural elite aware of Negro music for the first time."[1]

The Carnegie Hall concert in 1912, featuring James Reese Europe and his Clef Club Orchestra, was particularly significant in that it demonstrated the power of art and music to assist in the process of breaking down barriers of race and class. David Mannes, concertmaster of the New York Symphony Orchestra at the time, and the director of the Music Settlement School, for whom the concert was to benefit, possessed a strong belief in the idea that music was a universal language and as such could serve as a catalyst in bridging racial divides. The view was echoed by Natalie Curtis, a respected ethnomusicologist who studied the music of the Native American and African-American cultures (as well as being an in-law of Col. Robert Gould Shaw, who commanded the African-American 54th Regiment of Massachusetts in the Civil War). Miss Curtis believed that "if anything can bring harmony from the present clashing of the two races…it might as well be the peace-giver, music."

In spite of great trepidation and anxiety surrounding the social implications of the event, the historic concert sold out and proved to be a great success as the interracial audience responded with "a storm of tumultuous applause," according to Natalie Curtis. David Mannes' vision had paid off, as the concert raised five-thousand dollars for the Colored Music Settlement School, and he remarked that "a wedge in opening the public halls and theaters to colored people had been made."

James Reese Europe was born into a middle-class family in Mobile Alabama and began his musical studies after his family moved to Washington, D.C. when he was nine years old. It was in Washington, D.C. where Europe gained his interest in military music. He moved to New York City in 1903 but found that opportunities for employment as a musician was very scarce. His early ventures in composing came when he joined the "Memphis Students," a Negro performing group that performed in New York's Hammerstein Victoria Theater.

In 1910, he created the Clef Club that would quickly become the center for black musicians seeking work in New York City. He formed the "Society Orchestra" with the intent for providing performing opportunities for Negro artists.

His "Society Orchestra" became nationally famous in 1912, accompanying theater headliner dancers Vernon Castle and Irene Castle. In 1913 and 1914, he made a series of phonograph records for the Victor Talking Machine Company. These recordings are some of the best examples of the pre-jazz hot ragtime style of the U.S. North-East of the 1910s.

Neither the Clef Club Orchestra nor the Society Orchestra were small, "Dixeland" bands. They were large symphonic bands to satisfy the tastes of a public that was used to performances by the likes of the John Phillip Sousa band and similar organizations very popular at the time. The Clef Orchestra had 125 members[2] and played on various occasions between 1912 ans 1915, in Carnegie Hall. It is instructive to read a comment from a music review in the New York Times from March 12 , 1914:

Though there are few resemblances to what would become to big band ensembles of the 1930s and 1940s, in Europe's first bands, the basic scoring for the various instrumental sections was a precursor to the Swing era. Europe's band had set the stage for the music of Louis Armstrong, Ferd "Jelly Roll" Morton, and Duke Ellington.

During World War I Europe obtained a Commission in the New York Army National Guard, where he saw combat as a lieutenant with the 369th Infantry Regiment (the "Harlem Hell Fighters"), the band of which he directed to great acclaim. Rather than perform the menial tasks often assigned the Negro regiments, The 369th Regiment served honorably in combat and was awarded the Criox de Guerre, the highest military honor in France. In fact, it was French military commanders who appropriated the sobriquet "Hell Fighters" to the 369th regiment, due to their courage and valor under fire.

In February and March of 1918, James Reese Europe and his military band traveled over 2,000 miles in France, performing for British, French, and American military audiences as well as for French civilians.[4] The first concert included a French march, and the "Stars and Stripes Forever," as well as syncopated numbers such as "The Memphis Blues," which, according to a later description of the concert by a band member "…started ragtimitis in France."

The band returned to the United States in February 1919. As thousands lined the street of New York City to welcome the returning troops, leading the march up Fifth Avenue were Lieut. James Reese Europe's Harlem Hell Fighters Band, playing the music that had enthralled audiences throughout France. That same year, he made more recordings for Pathé Records. These include both instrumentals and accompaniments to vocalist Noble Sissle. The style is significantly changed from Europe's recordings of a few years earlier, incorporating blues, blue notes, and early jazz influence (including a rather stiff cover record of the Original Dixieland Jazz Band's "Clarinet Marmalade").

There is a popular perception that jazz left New Orleans in 1917, when the U.S. Navy put the Storyville section of the city off-limits, thus putting the many musicians who played in those establishments out of work and, thus, causing a great "diaspora" of those who would then spread jazz music throughout the rest of the United States. That view is, at the very least, an oversimplification. New Orleans musicians, such as the Original Creole Orchestra, were already in New York years earlier. The syncopation and unique melodic concepts ("blue notes," etc.) of jazz were present in many other places—including New York City—quite a few years earlier.

The racial and social circumstances surrounding the life and work of James Reese Europe provided him a unique opportunity to use his music as a sociological factor in breaking down barriers that contributed to social alienation and racial tensions that plagued the United States for much of its early history. As precursor to the formulation of Jazz as a distinctly American art form, James Reese Europe played a significant role in the development and acceptance of the genre. As Jazz became more popular, this music influenced race relations in American culture as black and white musicians embraced this style with great enthusiasm.

In addition to his important contributions to music in America, Europe was deeply concerned with the working conditions of black musicians. He established the Clef Club in 1910, as a talent agency and trade union for African-American musicians. He would often organize concerts throughout the United States to raise funds for the work of the Clef Club.

Noting his efforts in this regard, Jazz musician and colleague, Eubie Blake referred to Europe as being "the Martin Luther King of our music."

James Reese Europe died after being stabbed by a member of his band. At the time of his death, he was the best-known African American bandleader in the United States.