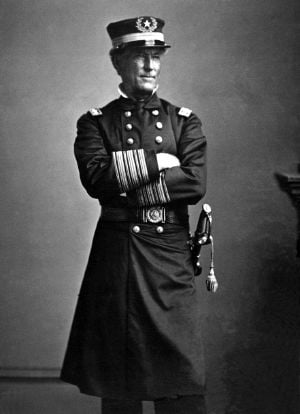 Admiral David Glasgow Farragut (July 5, 1801 – August 14, 1870) was the first senior officer of the U.S. Navy during the American Civil War. He was the first rear admiral, vice admiral, and full admiral of the Navy. He is remembered in popular culture for his possibly apocryphal order at the Battle of Mobile Bay, usually paraphrased: "Damn the torpedoes, full speed ahead." Victory at Mobile Bay helped to boost Abraham Lincoln's bid for re-election, and played a significant part in the Northern States' victory over the Confederate States of America.

At the time, the Navy was not as well developed as the United States Army. There had been full generals in the army since the birth of the nation, but Farragut was the first full admiral of the navy. Farragut's legacy helped to build the case for further strengthening the navy, which would play a crucial role in such future military engagements as the First and Second World Wars.

David Glasgow Farragut was born to Jorge (or George) and Elizabeth Shine Farragut, a woman of Scotch-Irish descent, at Lowe's Ferry on the Holston (now Tennessee) River. It was a few miles southeast of Campbell's Station, near Knoxville, Tennessee, where his father was serving as a cavalry officer in the Tennessee militia. Jorge Farragut Mesquida (1755–1817), a Spanish merchant captain from Minorca, a Balearic Island, had previously immigrated to America to join the American Revolutionary cause. He was descendant of a Minorcan notable named Don Pedro who had been a vital figure in expelling the Moors from Spain. David's birth name was "James," but it was changed in 1812, following his adoption by future naval Captain David Porter in 1808 (which made him the foster brother of future Civil War Admiral David Dixon Porter). Farragut was taken in by Porter after his mother passed away from yellow fever and Porter offered to act as the boy's caretaker to repay George Farragut for his prior care of Porter's father after he suffered a heat stroke which proved fatal (Davis 2000, 683).

David Farragut entered the Navy as a midshipman on December 17, 1810 at the age of nine. In the War of 1812, when only 12-years-old, he was given command of a prize ship taken by USS Essex and brought her safely to port. He was wounded and captured during the cruise of the Essex by HMS Phoebe in Valparaiso Bay, Chile, on March 28, 1814, but was exchanged in April 1815. Through the years that followed, in one assignment after another, he showed the high ability and devotion to duty that would allow him to make a great contribution to the Union victory in the Civil War and to write a famous page in the history of the United States Navy. Farragut had resided in Norfolk, Virginia until the outbreak of the war, but after professing support for President Lincoln's defense of Fort Sumter, he was forced to relocate further North to New York's Hastings-on-Hudson area (Davis 2000, 684).

When the Civil War broke out Farragut offered his services to the Union, but initially was just given a seat on the Naval Retirement Board due to concerns about his Southern birth. In time, thanks to the urgings of Commander David Dixon Porter, his adoptive brother, and Assistant Naval Secretary Gustavus Vasa Fox, Farragut was granted command on the high seas. In command of the West Gulf Blockading Squadron, with his flag on the USS Hartford, in April 1862 he ran past Fort Jackson and Fort St. Philip and the Chalmette, Louisiana, batteries to take the city and major port of New Orleans, Louisiana, on April 29 that year, a decisive event in the war. His country honored its great sailor after New Orleans by creating for him the rank of rear admiral on July 16, 1862, a rank never before used in the U.S. Navy. (Before this time, the American Navy had resisted the rank of admiral, preferring the term "flag officer," to separate it from the traditions of the European navies.) Later that year, he passed the batteries defending Vicksburg, Mississippi. Farragut had no real success at Vicksburg, where one makeshift Confederate ironclad forced his flotilla of 38 ships to withdraw in July 1862 (Davis 2000, 684).

He was a very aggressive commander but not always cooperative. At the Siege of Port Hudson the plan was Farragut’s flotilla would pass by the guns of the Confederate stronghold with the help of a diversionary land attack by the Army of the Gulf, commanded by General Nathaniel Banks, to commence at 8:00 a.m. March 15, 1863. Farragut unilaterally decided to move the time table up to 9:00 p.m., March 14 and initiate his run past the guns before Union ground forces were in position. By doing so the uncoordinated attack allowed the Confederates to concentrate on Farragut’s flotilla and inflict heavy damage on his warships.

Did you know?
David Glasgow Farragut was the first full admiral in the United States Navy

Farragut’s battle group was forced to retreat with only two ships able to pass the heavy cannon of the Confederate bastion. After surviving the gauntlet Farragut played no further part in the battle for Port Hudson and General Banks was left to continue the siege without advantage of naval support. The Union Army made two major attacks on the fort and both were repulsed with heavy losses. Farragut’s flotilla was splintered yet was able to blockade the mouth of the Red River with the two remaining warships, but not efficiently patrol the section of the Mississippi between Port Hudson and Vicksburg. Farragut’s decision thus proved costly to the Union Navy and the Union Army which suffered the highest casualty rate of the Civil War at the Battle of Port Hudson.

On August 5, 1864, Farragut won a great victory in the Battle of Mobile Bay. Mobile was then the Confederacy's last major port open on the Gulf of Mexico. The bay was heavily mined (tethered naval mines were known as torpedoes at the time). Farragut ordered his fleet to charge the bay. When the monitor USS Tecumseh struck a mine and sank the others began to pull back.

Farragut could see the ships pulling back from his high perch, lashed to the rigging of his flagship the USS Hartford. "What's the trouble?" was shouted through a trumpet from the flagship to the USS Brooklyn. "Torpedoes!" was shouted back in reply. "Damn the torpedoes!" said Farragut, "Four bells. Captain Drayton, go ahead! Jouett, full speed!" (Shippen 1883, 638). The bulk of the fleet succeeded in entering the bay. (Farragut had correctly predicted that the majority of the mines would not explode because they had been deactivated by the salt water (Davis 2000, 684). His main opponent, the CSS Tennessee, was easily overtaken. Farragut then triumphed over the opposition of heavy batteries in Fort Morgan and Fort Gaines to defeat the squadron of Admiral Franklin Buchanan (Davis 2000, 684).

Admiral Farragut's last active service was in the Mediterranean Sea as commander of the European Squadron, with the screw frigate Franklin as his flagship, and he died at the age of 69 in Portsmouth, New Hampshire of a heart attack (Davis 2000, 684). He is buried in Woodlawn Cemetery, Bronx, New York.

Numerous places and items are named in remembrance of Admiral Farragut: 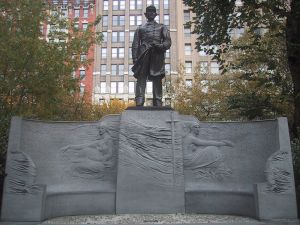 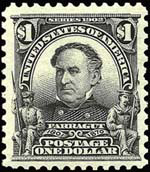 As the first full Admiral in the United States navy, and as a result of his leadership during the Civil War, Farragut has been an inspirational figure within navy and military circles. The significance of a strong navy under effective leadership as a vital component of military capability was underlined by his victory at Mobile Bay, which is credited with helping to boost President Lincoln's re-election bid. In future wars, a strong US navy played an essential role in protecting supply convoys to her European allies in World War I and in securing victory against Japan in the Pacific theater of World War II.