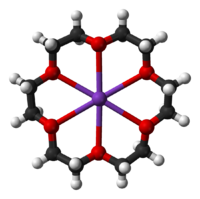 Crown ethers are heterocyclic chemical compounds that consist of a ring containing several ether groups. The most common crown ethers are oligomers of ethylene oxide, the repeating unit being ethyleneoxy (-CH2CH2O-). Important members of this series are the tetramer (n = 4, or four ethyleneoxy units), the pentamer (n = 5), and the hexamer (n = 6). The term "crown" refers to the resemblance between the structure of a crown ether bound to a cation, and a crown sitting on a head. The first number in the name of a crown ether refers to the number of atoms in the cycle, and the second number refers to the number of those atoms that are oxygen. Crown ethers are much broader than the oligomers of ethylene oxide; an important group is derived from catechol.

Crown ethers strongly bind certain cations, forming complexes. The oxygen atoms are well situated to coordinate with a cation located within the ring, whereas the exterior of the ring is hydrophobic (repels water and polar and ionic substances). The resulting cations often form salts that are soluble in nonpolar solvents, and for this reason crown ethers are useful in phase transfer catalysis. The denticity of the polyether influences the affinity of the crown ether for various cations. For example, 18-crown-6 has high affinity for the potassium cation, 15-crown-5 for the sodium cation, and 12-crown-4 for the lithium cation. The high affinity of 18-crown-6 for potassium ions contributes toward its toxicity.

Structures of some common crown ethers

In 1967, Charles Pedersen, a chemist working at DuPont, discovered a simple method of synthesizing a crown ether when he was trying to prepare a complexing agent for divalent cations.[1] His strategy involved linking two catecholate groups through one hydroxyl on each molecule. This linking defines a polydentate ligand that could partially envelop the cation and, by ionization of the phenolic hydroxyls, neutralize the bound dication.

Pederson was surprised to isolate a by-product that strongly complexed potassium cations. Citing earlier work on the dissolution of potassium in 16-crown-4,[2][3] he realized that the cyclic polyethers represented a new class of complexing agents that were capable of binding alkali metal cations. He proceeded to report systematic studies of the synthesis and binding properties of crown ethers in a seminal series of papers.

Apart from its high affinity for potassium cations, 18-crown-6 can also bind to protonated amines and form very stable complexes in both solution and the gas phase. Some amino acids, such as lysine, contain a primary amine on their side chains. Those protonated amino groups can bind to the cavity of 18-crown-6 and form stable complexes in the gas phase. Hydrogen-bonds are formed between the three hydrogen atoms of protonated amines and three oxygen atoms of 18-crown-6. These hydrogen-bonds make the complex a stable adduct.

"Aza-crowns" consist of crown ethers wherein an ether oxygen has been replaced by an amine group. A well-known tetrazacrown is cyclen. Mixed amine-ether crowns are also known.[5]