Chaetognatha is a phylum of small, slender, marine worms, generally characterized by a largely transparent body, fins on both the tail and the body, and grasping bristles or hooks on each side of the mouth that are used to capture prey. These bilaterally symmetrical, soft-bodied invertebrates are known by the common name of arrow worms and are a major component of zooplankton worldwide. They are generally less than an inch (2.5 centimeters) in size.

Chaetognaths, or arrow worms exemplify bilevel functionality in which they perform valuable service within the ecosystem while also meeting their own needs for nutrition, survival, and reproduction. Chaetognaths are an important part of marine food chains, consuming copepods and other small organisms and being consumed by fish and other larger carnivorous animals. For humans, they add to the diversity and mystery of nature, and also serve as indicator species useful in determining the level of water moving into the North Sea from the Atlantic Ocean (Pierrot-Bults 2004). 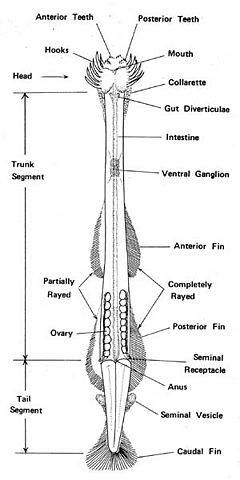 Arrow worms have long, narrow, soft bodies divided into a head, trunk, and tail, with a tail fin and one or two pairs of fins on the sides of the body, and with fin rays supporting all of the fins (Pierrot-Bults 2004). The head has eyes with photoreceptive cells, a mouth with one or two rows of teeth, and chitinous grasping spines or hooks on each side. When the animal swims, it covers its spines with a hood formed by the body wall folding in the neck region (Pierrot-Bults 2004). The body is transparent or translucent and covered by a cuticle, with the internal organs visible. Arrow worms living in surface waters tend to be less muscular and more transparent than species from deeper waters (Pierrot-Bults 2004). The guts of species may be yellow, orange, or red in color from consuming similarly colored prey. At least one species of chaetognath, Caecosagitta macrocephala, has bioluminescent organs on its lateral fins (Haddock and Case 2004).

The arrow worm's alimentary system comprises the mouth, esophagus, gut, and anus. The arrow worm also has a nervous system with a superficial cerebral ganglion, which forms the brain, several ganglia in the head region, and two lateral ganglia on either side of the esophagus (Pierrot-Bults 2004). Although arrow worms have eyes, a nervous system, and a mouth with tiny teeth, they have no respiratory or circulatory systems. Materials are moved about the body cavity by cilia. Waste materials are simply excreted through the skin and anus.

All species are hermaphroditic, carrying both eggs and sperm, with the male reproductive organs in the tail and the female organs in the trunk (Pierrot-Bults 2004). Sperms develop before the eggs.

Arrow worms are strictly marine, with a cosmopolitan distribution throughout the oceans. They are found from surface tropical waters and shallow tide pools to the deep sea and polar regions. About half of the known species are planktonic (Pierrot-Bults 2004), and about 20 percent are benthic and can attach to seaweed or rocks.

Despite the limited diversity of species, the number of individuals is staggering (Bone et al. 1991). The total biomass of arrow worms is estimated to be roughly thirty percent as much as the total biomass of copepods (Pierrot-bults 2004). The largest concentration of arrow worms is found in the epipelagic layer shallower than 200 meters (656 feet), with fewer individuals but more species in the mesopelagic layer, 200 to 1,000 meters (656 to 3,280 feet) (Pierrot-Bults 2004).

Chaetognaths swim in short bursts using a dorso-ventral undulating body motion, where their tail fin assists with propulsion and the body fins serve more for stabilization and steering (Jordan 1992). As carnivores, Chaetognaths swim actively to catch prey, which is usually a small copepod, but they can consume a variety of marine life of the right size, including fish larvae and other arrow worms, as well as phytoplankton (Pierrot-Bults 2004). They detect prey by sensing movement with ciliar tufts on their body and use their hooks to grab prey (Pierrot-Bults 2004). Some species are known to use the neurotoxin tetrodotoxin to subdue prey (Thuesen 1991).

Observations on the reproductive behavior of the Chaetognaths species Spadella cephaloptera indicates that this species cross-fertilizes, with the sperm package being deposited on the body of another individual of the same species, which then moves the package to the ovaries and stores it there to fertilize the eggs (Pierrot-Bults 2004).

Arrow worms hatch from eggs and grow without proceeding through a larval stage. In tropical waters, Sagitta tasmanica takes as little as six weeks to complete its life span, but in cold water it may take two years to mature (Pierrot-Bults 2004). Arrow worms have some developmental similarities to nematodes.

Chaetognatha typically is divided into two orders, Phragmorphora and Aphragmorphora, each comprising three families (Pierrot-Bults 2004). The number of genera depends on the classification scheme used, with the genus Sagitta split by different authors into nine to eleven genera (SERTC 2004; Pierrot-Bults 2004). Overall, there are about 120 known species, although there are likely many benthic species yet to be discovered.

Chaetognaths are traditionally classed by embryologists as deuterostomes (based on the order of developing openings in the embryo). Lynn Margulis and K. V. Schwartz place chaetognaths in the deuterostomes in their Five Kingdom classification (Systema Naturae 2000a). Molecular phylogenists, however, consider chaetognaths to be protostomes. Thomas Cavalier-Smith places them in the protostomes in his Six Kingdom classification (Systema Naturae 2000b). The similarities between chaetognaths and nematodes may support the protostome thesis; in fact, chaetognaths are sometimes regarded as a basal ecdysozoan (which includes those species having a chitinous cuticle, or exoskeleton, that is shed regularly) (Matus et al. 2006).

Chaetognatha appears close to the base of the protostome tree in most studies of their molecular phylogeny (Marletaz et al. 2006). This may explain their deuterostome embryonic characters. If chaetognaths branched off from the protostomes before they evolved their distinctive protostome embryonic characters, they may have retained deuterostome characters inherited from early bilaterian ancestors. Thus, chaetognaths may be a useful model for the ancestral bilaterian (Papillon et al. 2004).

Due to their soft bodies, chaetognaths are considered to fossilize poorly. Even so, several fossil chaetognath species have been described (Vannier et al. 2007). Chaetognaths appear to have originated in the Cambrian. Complete body fossils have been formally described from the Lower Cambrian Maotianshan shales of Yunnan, China (Eognathacantha ercainella) (Chen and Huang 2002) and Protosagitta spinosa (Hu 2005) and the Middle Cambrian Burgess Shale of British Columbia (Oesia disjuncta Walcott (Szaniawski 2005)). A more recent chaetognath, Paucijaculum samamithion Schram, has been described from the Mazon Creek biota from the Pennsylvanian of Illinois.

Chaetognaths were thought possibly to be related to some of the animals grouped with the conodonts (extinct eel-like animals). The conodonts themselves, however, are thought to be related to the vertebrates. It is now thought that protoconodont elements (e.g., Protohertzina anabarica Missarzhevsky, 1973), are probably grasping spines of chaetognaths rather than teeth of conodonts. Previously chaetognaths in the Early Cambrian were only suspected from these protoconodont elements, but the more recent discoveries of body fossils have confirmed their presence then (Szaniawski 2002).