Cathedral of Christ the Saviour (Moscow)

The Cathedral of Christ the Saviour (Russian: Хра́м Христа́ Спаси́теля) is the tallest Eastern Orthodox Church in the world. It is situated in Moscow, on the banks of the Moskva River, a few blocks west of the Kremlin.

The cathedral was commissioned by Tsar Alexander I on December 25, 1812, following the defeat and withdrawal of Napoleon's troops from Russia. The Tsar proclaimed the cathedral a monument of gratitude for the intervention of "Divine Providence for saving Russia" from doom, and as a memorial to the sacrifices of the Russian people.

Following the death of Vladimir Lenin in 1924, the site of the cathedral was chosen by the Soviets as the site for a monument to socialism known as the Palace of Soviets. The palace was to have been topped by a 100 meters (330 ft) statue of Lenin. The Cathedral was demolished in December 1931 to make way for the monument. Construction of the palace began in 1937, but was terminated by the German invasion in 1941 and was never completed.

The glory of Russian culture is exemplified not only in its arts, sciences and literature, but also in the splendor of its churches. Many in Russia view the Cathedral of Christ the Saviour as an allegory of the life of Christ as well as of Russia itself. After enduring the 20th century's history of Nazi-fascism from without and of Marxist-Communism from within, at the beginning of the twenty-first century it stands ready for a new era. The resurrected Cathedral is a symbol of hope and encouragement to the Russian people.

The birth of the Cathedral of Christ the Savior was the result of the Napoleonic Wars of the early nineteenth century. Envisioning Europe as a confederation of states under French hegemony, Napoleon headed to Russia in 1812. Known as the Great Patriotic War of 1812, Napoleon's engagement with Russia lasted less than one year, and resulted in the defeat and destruction of what had been believed to be an undefeatable force. Less than 10 percent of the invading army survived.

When the last of Napoleon's soldiers left Moscow, Tsar Alexander I signed a manifesto, December 25, 1812, declaring his intention to build a Cathedral in honor of Christ the Saviour "to signify Our gratitude to Divine Providence for saving Russia from the doom that overshadowed Her" and as a memorial to the sacrifices of the Russian people.

It took some time for actual work on the cathedral project to get started. The first finished architectural project was endorsed by Alexander I in 1817. It was a flamboyant Neoclassical design full of Freemasonic symbolism. Construction work was begun on the Sparrow Hills, the highest point in Moscow, but the site proved insecure.

Alexander I developed typhus, from which he died in Russia's southern city of Taganrog on December 1, 1825. He was succeeded by his brother Nicholas. Profoundly Orthodox and patriotic, the new Tsar disliked the Neoclassicism and Freemasonry of the project selected by his brother. He commissioned his favorite architect, Konstantin Thon, to create a new design, taking as his model Hagia Sophia in Constantinople. Thon's Neo-Byzantine design was approved in 1832, and a new site, closer to the Moscow Kremlin, was chosen by the Tsar in 1837. A convent and church on the site had to be relocated, so that the cornerstone was not laid until 1839. 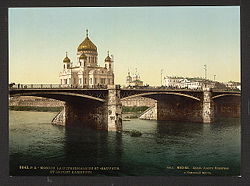 View of the cathedral and the Great Stone Bridge in 1905.

The Cathedral took twenty-one years to build and did not emerge from its scaffolding until 1860. Some of the best Russian painters (Ivan Kramskoi, Vasily Surikov, Vasily Vereshchagin) continued to embellish the interior for another twenty years. The Cathedral was consecrated on the very day Alexander III was crowned, May 26, 1883. A year earlier, Tchaikovsky's 1812 Overture debuted there.

The inner sanctum of the church was ringed by a two-floor gallery, its walls inlaid with rare sorts of marble, granite, and other precious stones. The ground floor of the gallery was a memorial dedicated to the Russian victory over Napoleon. The walls displayed more than 1,000 square meters of Carrara bianca marble plaques listing major commanders, regiments, and battles of the Patriotic War of 1812 with the lists of awards and casualties appended. The second floor of the gallery was occupied by church choirs. 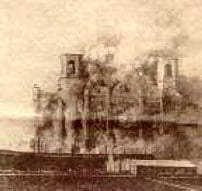 After the Russian Revolution of 1917 and, more specifically, the death of Vladimir Lenin, the prominent site of the cathedral was chosen by the Soviets as the site for a monument to socialism known as the Palace of Soviets. This monument was to rise in modernistic, buttressed tiers to support a gigantic statue of Lenin perched atop a dome with his arm raised in blessing.

On December 5, 1931, by order of Stalin's minister Lazar Kaganovich, after removing much of the interior decorations and art works, the temple was dynamited and reduced to rubble. It took more than one blast to destroy the church and more than a year to clear the debris from the site. The original marble high reliefs were preserved and are now on display at the Donskoy Monastery. For over six decades, they were the only reminder of the Cathedral of Christ the Saviour.

The construction of the Palace of Soviets was interrupted due to a lack of funds, problems with flooding from the nearby Moskva River, and the outbreak of war. The flooded foundation hole remained on the site for nearly thirty years. Under Nikita Khrushchev's leadership in 1958-1960, the Palace foundations were cleared of rubble and converted to the open-air Moskva swimming pool. The one-of-a-kind circular pool had a diameter of 129 meters (423.23 ft).

With the end of the Soviet rule, the Russian Orthodox Church received permission to rebuild the Cathedral of Christ the Saviour in February 1990. A temporary cornerstone was laid by the end of the year. The restorer Aleksey Denisov was called upon to design a replica of extraordinary accuracy.

A construction fund was initiated in 1992 and funds began to pour in from ordinary citizens in the autumn of 1994. When construction was well under way, Denisov was replaced by Zurab Tsereteli who introduced several controversial innovations. For instance, the original marble high reliefs along the walls gave way to the modern bronze ones, which have few if any parallels in Russian church architecture. The lower church was consecrated to the Saviour's Transfiguration in 1996, and the completed Cathedral of Christ the Saviour was consecrated on the Transfiguration day, August 19, 2000.

A pedestrian bridge across the river from Balchug was constructed between June 21, 2003 and September 3, 2004. On the slope of the hill to the right from the cathedral are the monumental statues of Alexander II and Nicholas II. The cathedral square is graced by several chapels, designed in the same style as the cathedral itself.

Below the new church is a large hall for church assemblies, where the last Russian Tsar and his family were canonized in 2000. On May 17, 2007, the Act of Canonical Communion between the Moscow Patriarchate of the Russian Orthodox Church and the Russian Orthodox Church Outside Russia was signed there. The full restoration of communion with the Moscow Patriarchate was celebrated by a Divine Liturgy at which the Patriarch of Moscow and All Russia, Alexius II, and the First Hierarch of ROCOR, Metropolitan Laurus, concelebrated the Divine Liturgy for the first time in history.

The first Russian President Boris Yeltsin, who died of heart failure on April 23, 2007, lay in state in the cathedral prior to his funeral and interment in Novodevichy Cemetery.