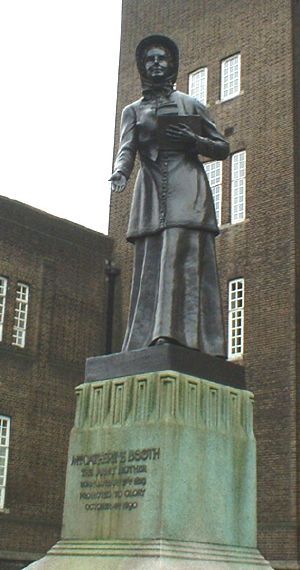 Statue of Catherine Booth, the Mother of the Army

Catherine Booth (January 17, 1829 – October 4, 1890) was the wife of William Booth, founder of the Salvation Army, and was considered the "Mother" of the organization. As a lay preacher in her own right, she helped to pioneer leadership positions for women in the Church. In Victorian England, appalled by the situations of prostitutes, alcoholics and the homeless, she sought to bring Christianity to the people. She was not only a strong supporter of her husband's mission to begin the Salvation Army, but many times she was at the helm, preaching, organizing, and making decisions that would help build the Christian social group into a worldwide movement.

She was born Catherine Mumford in Ashbourne, Derbyshire, England, the daughter of John Mumford and Sarah Milward. Her father was a coach builder. Her family later moved to Boston, Lincolnshire, and later lived in Brixton, London.

Her mother, pious and strict in her beliefs, did not allow her daughter to play with other children, read fiction or learn French. Her severe upbringing prepared Catherine, nonetheless, for the life of faith that was to come. Catherine was a serious and sensitive girl and displayed strong moral convictions at a tender age. She read her Bible through eight times before the age of 12, and even went so far as to give up eating sugar because of its link to African slavery.

At age 14, she was ill with an undiagnosed ailment and spent a great deal of time in bed. During her enforced confinement she read theology beginning with The Pilgrim's Progress. She began to develop a view—which would later correspond with her husband's—that rejected the Calvinistic teaching of the doctrine of the elect, which can be interpreted that only certain people are predestined to be saved. This was to be an important point of departure from traditional theological arguments of the time, as the Booths sought ultimately to bring salvation to the poor and downtrodden and—in theory at least—to every last man, woman, and child.

Catherine also became a strong advocate of the Temperance Movement, which saw alcohol as the root of evil. Later, the Salvation Army would go so far as to discontinue the Holy Sacrament of Communion due to its necessity of dispensing wine. Catherine was a member of the local Band of Hope—band music was to be another hallmark of Salvation Army "camp-style" open air meetings.

She met William Booth, a Methodist minister, when he came to preach at her church in 1852. They soon became engaged, and during their three year engagement, they were often separated due to William's itinerant preaching. Catherine Booth lent support and strength to her future husband through letters she wrote to him, often on a daily basis.

They were married June 16, 1855, at Stockwell Green Congregational Church in London. Their wedding was very simple, as they wanted to use their time and money for his ministry. Even on their honeymoon, William Booth was asked to speak at meetings. Together they accepted this challenge of living a public life on the frontline of Christian ministry.

Booth began to be more active in the work of the Church at Brighouse. There, while her husband traveled as a circuit preacher, she learned about the lives of the Northern poor. She was horrified by the circumstances of "mill girls;" those who began work at age seven or eight years of age to help support a family often headed by an alcoholic father. The effects of the Industrial Revolution were being felt by a formerly agrarian society, and although many people had jobs, more often than not, they were the working poor, without benefit of medical care or education. Catherine would begin a lifelong campaign against the effects of alcohol consumption here at Brighouse.

Although timid by nature, when the opportunity presented itself to give a testimony at Gateshead, she boldly came forth. From that day forward, she became a speaker and a preacher in her own right. It was to be the beginning of a tremendous ministry, as people were drawn to her preaching, at least partly intrigued by a female preacher. At that time, it was nearly unheard of for women to speak openly in a public setting.

Mrs. Booth supported her views on the role of women in the Church with Biblical quotes from St. Paul. She would often quote, from his Letter to the Galatians: "There is neither male nor female for ye are all one in Christ Jesus"—to support her position on the need for equality for women in the church.

After leaving the Methodist New Connexion in 1865, the Booths began the work of The Christian Mission in earnest with a "Soup Kitchen and Poor Man's Dining Hall" at The People's Hall in Whitechapel. They also began the publication of the Christian Mission Magazine which warned—somewhat ahead of its time—of the dangers of tobacco. (Their later publication would be called The War Cry.) William and Catherine were a powerful couple whose roles naturally evolved: William preached to the poor and Catherine spoke to the wealthy, gaining support for their financially demanding ministry. She eventually began to hold her own campaigns, even writing letters to Queen Victoria with pleas for better laws to protect impoverished women from the lure of prostitution.

When the name was changed in 1878, to The Salvation Army, William Booth became known as the "General," and Catherine became known as the Mother of the Army. She was behind many of the important developments in the new organization, such as designing the flag and the "Hallelujah Bonnets" worn by the women. At annual conferences she contributed many important ideas regarding the belief and practices of the newly established Salvation Army.

The Booths had eight children: Bramwell, Ballington, Kate, Emma, Herbert, Marie, Evangeline, and Lucy. Two of their offspring, Bramwell and Evangeline, later became Generals of The Salvation Army. Kate Booth was the first missionary to France and later began a chapter in Switzerland. In Switzerland, she was put on trial and imprisoned briefly for the Salvation Army's alleged disregard of laws related to "open air" evangelizing. However, Kate was soon acquitted; in times of adversity the Booth family forged ahead with even greater proselytizing activity.

The new group adopted uniforms in order to bolster morale, but also to help make Salvation Army members more recognizable to one another on the streets. Fashion of the day was considered one more temptation to be eschewed by pious Christians. Interestingly, in hot climates, such as India, members dressed like local natives by wearing turbans and veils, and going barefoot, partly in an effort to more closely identify with the local population that they were attempting to witness to.

Illnesses she suffered for most of her life did little to slow Booth down. Early on, she was an advocate of homeopathy and alternative forms of medicine. When she was diagnosed with breast cancer in 1888, she refused surgery. Although suffering in the final stages of cancer, she still managed to occasionally speak at Salvation Army meetings and to hold bedside visits with guests and family. Her heroic and exemplary manner during her illness served as an inspiration for Salvation Army members. Fittingly, she was photographed on her death bed under the Salvation Army banner bearing their slogan, "Blood and Fire." One of her last messages, displayed at the Annual Anniversary Meeting in July of 1890, the 25th anniversary of the founding of the Salvation Army, read:

My place is empty but my heart is with you. You are my joy and crown. Your battles, sufferings and victories have been the chief interest of my life for these twenty-five years…. I am dying under the Army flag and it is yours to live and fight under.

On October 4, 1890, Catherine Booth, age 61, passed away in William's arms with her family around her. She is interred with her husband in Abney Park Cemetery, London.

Retrieved from https://www.newworldencyclopedia.org/p/index.php?title=Catherine_Booth&oldid=1002824
Categories:
Hidden category:
This page was last edited on 19 January 2017, at 16:16.
Content is available under Creative Commons Attribution/Share-Alike License; additional terms may apply. See Terms of Use for details.