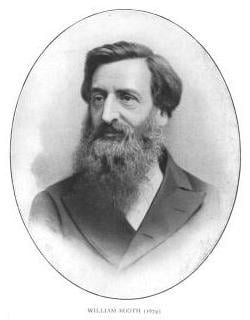 William Booth (April 10, 1829 – August 20,1912) was the founder and first General (1878-1912) of The Salvation Army. Originally a Methodist lay preacher, William Booth saw tremendous need not being fulfilled by mainstream churches in Victorian England. A large underclass of desperately impoverished people living in the slums of England were created by the advent of the Industrial Revolution. William Booth felt a divine calling to serve and bear witness to the poor. Initially met with derision and skepticism, he never wavered in his vision and ultimately his Salvation Army garnered respect throughout the world where it is known mostly for its service programs.

Booth was born in Sneinton, Nottingham, England, the only son of four children born to Samuel Booth and Mary Moss. The Booth family was wealthy by the standards of the time, but during his childhood the family descended into poverty as a result of his father's bad investment decisions. In 1842, Samuel Booth, who by then was bankrupt, could no longer afford his son's school fees, and 13–year-old William was apprenticed to a pawnbroker. Later that same year Samuel Booth died.

A few years into his apprenticeship, Booth was converted. He said of his experience, "...there was no thunderclap or lightning flash, sudden darkness, mysterious voice or midnight visitation from angels...." However, he did come to believe through this experience in the theology of "instant conversion" that was, at that time, being practiced in America by revivalists moving from town to town in New England. John Wesley had introduced the idea of "The Doctrine of Perfection" which states that man can be sanctified in this lifetime. However, the point of debate between Christians was how this was to be achieved; through a slow maturing process, or as Booth believed, through an immediate and absolute conversion. Tall and Dickens-like in his dress and possessing powerful oratorical skills, Booth practiced his own brand of preaching in the streets of Nottingham. The techniques he employed were to be a central mainstay of his evangelism with the Salvation Army: "Go to the people with the message of salvation and employ the people you have saved to save others." This would prove to be a winning formula for Booth time and again.

When his apprenticeship ended in 1848, Booth spent a year looking in vain for more suitable work than pawnbroking, which he disliked. In 1849, Booth reluctantly left his family and moved to London, where he found work and lodging in a pawnbroker's shop. Booth tried to continue lay preaching in London, but the small amount of preaching work that came his way frustrated him so he resigned as a lay preacher and took to open-air evangelizing in the streets and on Kennington common.

In 1851, Booth joined the Reformers (Wesleyan Reform Union), and on April 10 1852, his twenty–third birthday, he left pawnbroking and became a full-time preacher at their headquarters at Binfield Chapel in Clapham. Just over a month later, on May 15 1852, William Booth became formally engaged to Catherine Mumford. In November 1853, Booth was invited to become the Reformers' minister at Spalding in Lincolnshire.

William Booth and Catherine Mumford were married June 16, 1855 at Stockwell Green Congregational Church in London. Though Booth became a prominent Methodist evangelist, he was unhappy that the annual conference of the denomination kept assigning him to a pastorate, which tied him down with duties that were difficult to fulfill on top of the frequent evangelistic campaigns that he longed to be a part of. At the Liverpool conference in 1861, after having spent three years at Gateshead, his request to be freed for evangelism full-time was refused yet again, and Booth resigned from the ministry of the Methodist New Connexion.

Soon Booth was barred from campaigning in Methodist congregations, so he decided to seek work as an independent evangelist. This suited his itinerant lifestyle, and what he felt was his calling from God—to be on the frontline and witness to the poor. Although his evangelical style of "high emotion" alienated the religious establishment, it won many converts. His religious views and his passion were shared by his wife Catherine, a strong supporter of her husband, who became a leader in her own right when she began preaching and drawing crowds, almost unheard of for a woman in that time.

Booth's view of salvation was not focused on doctrine or theology. His fundamental doctrine was "bring religion to the people." As such, finances were a challenge for the Booth family as they often had to live on donations they received through preaching. The Booths were often separated from each other and from their children, but eventually all the Booth children became involved in the ministry of their parents. The Salvation Army was to become a family affair and in many ways, it would also become a family to its members.

Booth lived at a time in which four decades of poverty brought on by the Industrial Revolution sewed the seeds for more radical philosophies like socialism to emerge. Friedrich Engel's book written in 1844, The Condition of the Working Class in England was the foundational work for Marx's even more revolutionary solution to poverty. Adhering to none of the developing social theories of the time, Booths' philosophy of service was best summed up by the quote, "...and this satisfying of the outer man with bread that perishes, we hope will lead on to the satisfying of the inner man with the bread that comes from heaven." Booth and his followers sought to live a "practical Christianity." One of their more successful projects was the “Food for the Million” shops or, as they were to be more commonly called, soup kitchens.

As their persecution increased, their success in winning converts and recruits did as well. Salvation Army members were sometimes attacked in the streets by thugs hired by liquor distributors or congregating at taverns. These opponents loosely organized themselves into "skeleton armies" which sought out vulnerable Salvation Army members working in the streets. Booth, often drawing comparisons to Christ's own life of persecution, encouraged his followers to be strong in the face of persecution and to even welcome it as an opportunity to be Christ-like. 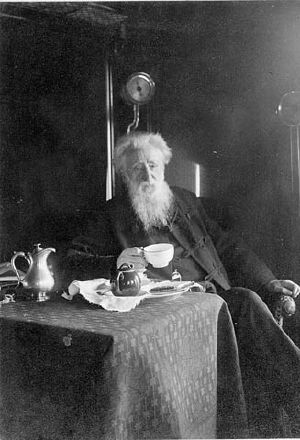 "I want to make an army"

In 1878, the name of the organization was changed to The Salvation Army. In some ways it was modeled after the military, with its own flag and its own music—Christian words were set to popular tunes from local pubs. Booth and the other "soldiers in God's Army," "put on the armour," for meetings and ministry work. Booth became its 1st General and his other ministers were given appropriate ranks as officers.

The need for money to help the needy was an ever growing issue but Booth and The Salvation Army persevered through some lean years. In the early 1880s, chapters were opened in other countries, many pioneered by Booth's own children. One of the first missionaries was Kate Booth who was sent to France. Others went to the USA, Switzerland, Sweden, and to most of the countries of the British Empire: Australia, Canada, India, South Africa, New Zealand, and Jamaica.

During his lifetime, Booth, traveling extensively, established Salvation Army "units" on all five continents and in 58 countries. The Salvation Army's inauguration in each country began with controversy and in a few cases family members were imprisoned for short periods of time as local laws came against their brand of evangelizing.

Booth regularly published a magazine and was the author of a number of books; he also composed several songs. His book In Darkest England and the Way Out not only became a bestseller after its 1890 release, but it laid the groundwork for the Army's modern social welfare plans—some of which were more practical to employ than others. The book addresses abolishing poverty by establishing shelters for the homeless, and farm communities where the urban poor could be trained in agriculture. In what would become one of the Salvation Army's more successful endeavors it established halfway homes for prisoners. In his book he expresses that if the state fails to meet its social obligations to the poor than it will be the task of each Christian to fulfill this duty. In Darkest England and the Way Out was reprinted several times and most recently in 1970. 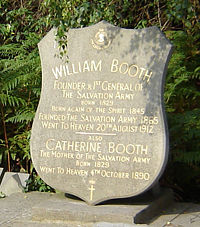 Grave of William and Catherine Booth in Stoke Newington

Opinion of the Salvation Army and William Booth eventually changed to that of respect and even admiration. In his later years Booth held audiences with kings, emperors and presidents. Even the mass media began to use his title of "General" with affectionate reverence.

William Booth died at age 83 in Hadley Wood, London. He was buried with his wife in the main London burial ground for nineteenth–century nonconformist ministers and tutors, the nondenominational Abney Park Cemetery in Stoke Newington. In his honor, Vachel Lindsay wrote the poem General William Booth Enters Heaven,[1] and Charles Ives, who had been Booth's neighbor, set it to music.

William Booth was succeeded by his son, Bramwell Booth, who became the second "General" of the Salvation Army, serving from 1912 to 1929.