For Saint Bridgid of Sweden, see Bridget of Sweden.

Saint Brigid of Kildare or Brigid of Ireland (also: Brigit, Bridget, Bridgit, Bríd or Bride - c. 451–525) was an Irish nun, abbess, and founder of several convents and a school. She is venerated as a saint in Catholic, Anglican, and Orthodox tradition. Considered one of Ireland's three patron saints along with saints Patrick and Columba, her feast day is February 1, the traditional first day of spring in Ireland.

Brigid was reportedly a disciple of Patrick's nephew, Saint Mel. One tradition holds that she was consecrated by him not only as an abbess, but also as a bishop. Her work as a missionary and teacher was highly successful, and by the time of her death, the abbey at Kildare had grown into a cathedral that became famous throughout Europe as a center of learning.

The legendary nature of her life has led considerable debate about her historicity, and some suggest that parts of her biography were adapted from the pagan goddess Brigid, after whom she was apparently named. Brigid is still a popular saint in Ireland, and many Irish girls are named for her.

A text page from the Book of Armagh.

Perhaps the earliest extensive life of Brigid is the Vita Brigitae of the monk Cogitosus of Kildare, which is variously thought to have been written between the mid-seventh and early ninth centuries. Another account is attributed to Coelan, an Irish monk of the eighth century. It derives particular importance from the fact that it is prefaced by Saint Donatus, also an Irish monk, who became bishop of Fiesole in 824.

Her friendship with Saint Patrick is attested, though perhaps not so authoritatively, by the following translated paragraph from the ninth century Book of Armagh: "Between Patrick and Brigid, the pillars of the Irish, there was so great a friendship of charity that they had but one heart and one mind. Through him and through her Christ performed many miracles." There is evidence concerning Brigid in the Trias Thaumaturga, published at Louvain in 1647, especially regarding her stay in Connacht, and also in the many churches founded by her in the Diocese of Elphim.

Brigid is traditionally believed to have been born at Faughart near Dundalk, County Louth, Ireland. According to some accounts, her father was Dubhthach, a pagan (possibly Druid) chieftain of Leinster; and her mother was Brocca, a Christian Pict who had been baptized by Saint Patrick. Other sources, however, suggest that Brigid's mother was in fact Portuguese, kidnapped by Irish pirates and brought to Ireland to work as a slave in much the same way as Patrick had been. Brigid was named after one of the most powerful pagan deities, Brigid, the goddess of fire, whose manifestations were song, craftsmanship, and poetry, which the Irish considered the "flame" of knowledge. 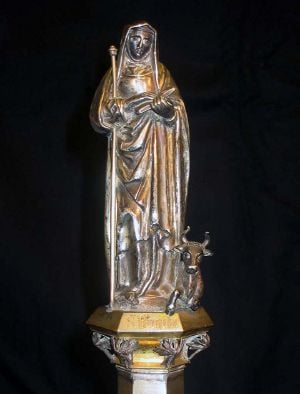 Whether she was raised a Christian or converted, as some accounts say, is uncertain. She is said to have been inspired by the preaching of Saint Patrick from an early age. Despite her father's opposition, she was determined to enter religious life. Numerous stories testify to her piety. She reportedly had a generous heart and could never refuse the poor who came to her father's door, dispensing milk and flour to all and sundry. Her charity angered her father, however, who thought she was being overly generous to the poor and needy. When she finally gave away his jewel-encrusted sword to a leper, Dubhthach realized that her disposition was indeed best suited to the life of a nun. Brigid thus finally got her wish and she was sent to a convent. 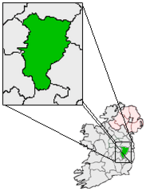 Brigid professed vows dedicating her life to Christ and received the nun's veil from Patrick's nephew Saint Mel. About 468, she followed Mel to the kingdom of Teathbha which was comprised of sections of modern Meath, Westmeath and Longford.

Brigid is believed to have founded her first convent in Clara, County Offaly. Other foundations followed. Around 470 she founded Kildare Abbey, a double monastery, for both nuns and monks, on the plains of Cill-Dara where her cell was made under a large oak tree.

According to the legend, the elderly Bishop Mel, as he was blessing Brigid as abbess, inadvertently read the rite of consecration of a bishop, which could not be rescinded under any circumstances. The story spread that Saint Mel was inspired by God to make her a bishop. Whether the legend is true or not, Brigid and her successor abbesses at Kildare held an authority equal to that of a bishop until the Synod of Kells-Mellifont in 1152, which reformed the administration of the Irish churches. 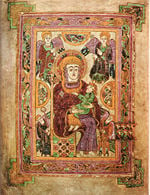 Madonna and Child from the Book of Kells, either a similar illuminated book or the same book as the Book of Kildare

Brigid's small oratory at Cill-Dara (Kildare) became a center of religion and learning and eventually developed into a cathedral city. She appointed the future Saint Conleth as pastor over the monastery, although it is disputed whether she also made him bishop of Kildare. Thus, for centuries, Kildare was ruled by a double line of abbot-bishops and of abbesses, the abbess of Kildare being regarded as superioress-general of the convents in Ireland.

Brigid also founded a school of art, including metal work and illumination, over which Conleth presided. The Kildare scriptorium produced the lost Book of Kildare (unless this book actually was the existing Book of Kells, as many suppose), which elicited high praise from chronicler Giraldus Cambrensis (c. 1146 – c. 1223). According to Giraldus, nothing that he had ever seen was at all comparable to the book, every page of which was gorgeously illuminated, leaving the impression that "all this is the work of angelic, and not human skill."

Brigid was famous for her common sense and most of all for her holiness. Even in her lifetime she was already regarded as a saint.

Brigid died at Kildare around 525 and was buried in a tomb before the high altar of her abbey church. When dying, she was attended by Saint Ninnidh, who was afterward known as "Ninnidh of the Clean Hand" because he supposedly had his right hand encased with a metal covering to prevent it ever being defiled after administering the last rites to "Ireland's Patroness."

Her skull was supposedly brought to Igreja de São João Baptista in Lisbon, Portugal by three Irish noblemen, where it remains. About the year 878, owing to fears resulting from Viking raids, Brigid's local relics were reportedly taken to Downpatrick, where they were interred in the tomb of Patrick and Columba. The relics of the three saints were reportedly discovered in 1185, and on June 9 of the following year were reinterred in Downpatrick Cathedral. At Armagh there was the little abbey church known as "Regles Brigid," which contained some relics of the saint, destroyed in 117, by William Fitz Aldelm. Brigid's hand is preserved at Lumiar near Lisbon, Portugal, since 1587, and another relic is at St. Martin's in Cologne. 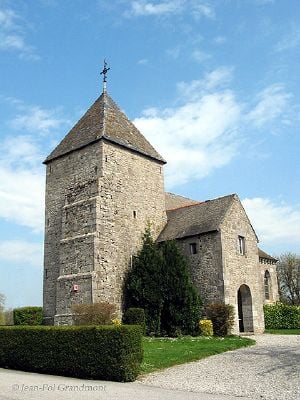 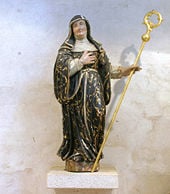 Brigid died leaving a cathedral city and school that became famous all over Europe. Faughart Church was founded by Saint Moninne in honor of Brigid. The old well of Brigid's adjoining the ruined church still attracts pilgrims. In her honor, Saint Ultan of Ardbraccan wrote a hymn commencing:

Christ was made known to men
On our island of Hibernia
by the very great miracles
which he performed
through the happy virgin of celestial life,
famous for her merits
through the whole world.

There is widespread devotion to Brigid in Ireland, where she is known as the "Mary of the Gael" and her cult was brought to Europe by Irish missionaries, such as Foillan, in the centuries after her death. She is also known as "the Patroness of Ireland, and over the years her shrine at Kildare Cathedral became an object of veneration for pilgrims, especially on her feast day, February 1. In Belgium there is a chapel (seventh through tenth century) dedicated to Sainte-Brigide at Fosses-la-Ville, and Sint Brigid is the patron saint of the Dutch city of Ommen. In addition, Brigid is highly venerated by many Orthodox Christians as one of the great Western saints prior to the schism between the Eastern and Western Churches.

In Ireland today, Brigid remains a popular saint, and Brigid is a common female Christian name. Moreover, hundreds of place-names in her honor are to be found all over both Scotland and Ireland, e.g. East Kilbride, Kilbride, Brideswell, Tubberbride, Templebride, etc. Places named Brideswell and Tupperbride commemorate in their names the presence of a sacred well ("Tobar" in Gaelic) dedicated to Brigid or her pre-Christian antecedent.

Legend has it that Brigid made her cross from rushes she found on the ground beside a dying man, fashioning the cross in order to convert him. It is still the custom in many houses in Ireland to have a Saint Brigid's Cross in honor of the saint. The cross takes many forms and is technically classed by folk crafts experts as a "plaited corn dolly," although the technologies utilized can extend beyond plaiting to weaving and other forms. Other of these forms such as, the "God's eye," appear in other cultural contexts.

According to tradition, a new cross is made each Saint Brigid's Day (February 1), and the old one is burned to keep fire from the house, yet customs vary by locality, and family. Many homes have multiple crosses preserved in the ceiling, the oldest blackened by many years of hearth fires. Some believe that keeping a cross in the ceiling or roof is a good way to preserve the home from fire, which was a major threat in houses with thatch and wood roofs.

Brigid shares not only her name, but also her feast day with the Celtic pagan goddess Brigid, celebrated by a festival called Imbolc. Like the goddess, she is associated with sacred wells. Her status as a "bishop" may have kept alive a tradition of female priesthood associated with Brigid's worship. Critical scholars believe this may indicate that the Saint Brigid story is at least partly based on the pagan figure in order to convert Celts to Christianity. Given the struggle Christian missionaries faced in their efforts to preach the Gospel in Ireland, the adoption of a pagan goddess into the Communion of Saints may have been an effort to Christianize one of the most enduring pagan goddesses.

Most historians, however, admit that Saint Brigid was a real person who happened to be named after the goddess. Her life was later embellished by imaginative hagiographers, and her veneration took on some aspects of the early pagan tradition concerning the goddess.