This article is about Saint Bridget of Sweden. For Saint Brigid of Ireland, see Brigid of Kildare.

Saint Bridget or Bridgid of Sweden (1303 – July 23, 1373), born as Birgitta Birgersdotter and Birgitta of Vadstena, was a Christian mystic and the founder of the Bridgettine Order.

From a young age she kept records of what came to be known as her Celestial revelations, which were translated into Latin and became popular throughout Europe. She was also known for her Fifteen Oes, prayers she said she received from Christ in revelation, which also spread to many countries and were featured in many illuminated liturgical texts.

Bridget lived in the time of the Hundred Years War (1337-1453) with much religious and political struggle. She was married for over 20 years to Ulf Gudmarson, the prince of Närke, and had eight children. After her husband's death, she devoted her life solely to religion. She established the Brigettine order at Vadstena, Sweden in 1350. In August 1370, Pope Urban V confirmed the Rule of her congregation, at which time Bridget urged the pope to return the Holy See from Avignon back to Rome.

Unique among saints of the second millennium, she was also the mother of a saint—Catherine of Vadstena. Bridget was a contemporary of Julian of Norwich (1342 – c. 1416) and Catherine of Siena (1347 – 1380), all of whom wrote a books describing their revelations.

Bridget spent the latter part of her life in Rome where she died at 70. Her sanctuary lies in the Cathedral of Vadstena, the site of the order's establishment. 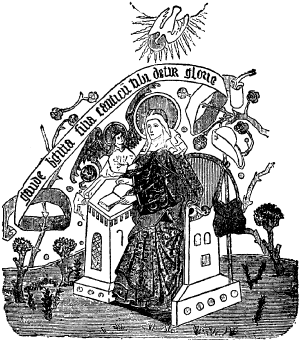 Bridget was the daughter of Birger Persson, governor and lawspeaker[1] of Uppland and one of the richest landowners of the country, and his wife, a member of a prominent branch of the Folkunga family. Through her mother, young Bridget related to the contemporary Swedish kings of her time. Saint Ingrid, whose death had occurred about 20 years before Bridget's birth, was a relative of the family, and Bridget's paternal forefathers had been on pilgrimage to Jerusalem for four generations to "walk in the path of James," the brother of Jesus. She received a careful religious training. Her mother died when Bridget was still a teenager and she was taken in by her devout maternal aunt. She began having visions soon after her mother's death (c. 1315), but her aunt advised her to keep her revelations quiet.

In 1316, at age 13, Bridget was married to Ulf Gudmarson, prince of Närke, to whom she bore eight children, one of whom was afterward honored as Saint Catherine of Sweden. After their children had grown, Bridget influenced her husband to go on pilgrimage to Santiago de Compostela, Spain (1341–1343). After their return they decided to live in a monastery in a spiritual marriage without sex and to let go of their worldly possessions.

In 1344, shortly after their return, Ulf died in the Cistercian monastery of Alvastra in Östergötland. Bridget, at 41, now devoted herself wholly to religion.

It was about this time that she founded the Order of St. Saviour, or the Bridgettines, of which the principal house at Vadstena was richly endowed by King Magnus Eriksson of Sweden and his queen. In Sweden she created a poor house and when possible went to serve them herself. According to her hagiography, "She washed their feet and clothed them and visited them when they were infirm and handled their wounds and bodies with tender compassion and the greatest of maternal charity."

The original Bridgettine order was open to both men and women. It was a "double order," each convent having attached to it a small community of canons to act as chaplains, but under the government of the abbess. The nuns were strictly enclosed, emphasizing scholarship and study, but the monks served additionally as preachers and itinerant missionaries. The individual monasteries were each subject to the local bishop.

About 1350, she went to Rome, partly to obtain the authorization of her new order, and partly in pursuance of her mission to elevate the moral tone of the age. It was not until 1370, however, that Pope Urban V finally confirmed the Rule of her order. Around this time, Bridget made an earnest request to Pope Urban to return the Holy See back to Rome from Avignon. Meanwhile Bridget had made herself known in Rome by her kindness and good works.

Save for occasional pilgrimages, including one to Jerusalem in 1373, she remained in Rome until her death on July 23, 1373, aged 70. She was originally buried at San Lorenzo in Panisperna before being moved to Sweden. She was canonized in the year 1391 by Pope Boniface IX, and confirmed by the Council of Constance in 1415. Her final resting place is at the Vadstena Abbey, the site where the Bridgettine Order was first established. Saint Bridget in a 1476 breviary for Bridgettine use

As a child, Bridget already believed herself to have had visions; as she grew older they became more frequent. In 1345, a year after her husband's death, a series of visions came to Bridget while she was awake and in prayer. She recorded these Celestial revelations, which were translated into Latin by Matthias, the canon of Linköping, and by her confessor, Peter, the prior of Alvastra. They obtained a great popularity during the lateMiddle Ages.

Shortly before her death, she described a vision of the birth of Jesus which had a great influence on depictions of the Nativity of Jesus in art.

The Virgin knelt down with great veneration in an attitude of prayer, and her back was turned to the manger…. And while she was standing thus in prayer, I saw the child in her womb move and suddenly in a moment she gave birth to her son, from whom radiated such an ineffable light and splendor, that the sun was not comparable to it, nor did the candle that Saint Joseph had put there give any light at all, the divine light totally annihilating the material light of the candle…. I saw the glorious infant lying on the ground naked and shining. His body was pure from any kind of soil and impurity. Then I heard also the singing of the angels, which was of miraculous sweetness and great beauty…

After this, the Virgin kneels to pray to her child, to be joined by Joseph. Technically known as the Adoration of the Child, the scene as she described it became one of the most common depictions in the fifteenth century, largely replacing the reclining Virgin in the western art. However, Franciscan versions of this depiction were known as early as 1300, well before Bridget's vision, and she may have been influenced by them.[2] Her visions of purgatory and of the passion of Christ were also well known.[3]

The 15 'Our Father and Hail Mary prayers' 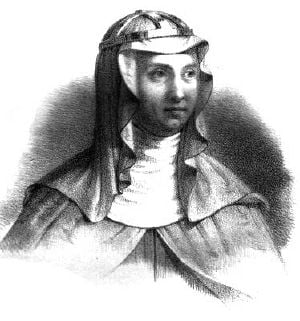 Portrait of Bridget of Sweden 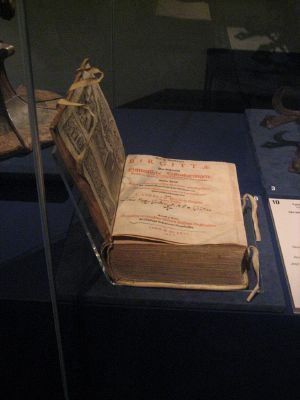 A 1664 German copy of Bridget's book of her Celestial revelations (Finnish Nationalmuseum, Helsinki)

Bridget prayed for a long time to know how many blows Christ suffered during his passion. She reported that he appeared to her in a vision and said: "I received 5475 blows upon My Body. If you wish to honor them in some way, recite 15 Our Fathers and 15 Hail Marys with the following prayers, which I myself shall teach you, for an entire year. When the year is finished, you will have honored each of My Wounds."

The prayers became known as the Fifteen Oes, because in the original Latin, each prayer began with the words O Jesu, O Rex, or O Domine Jesu Christe ("O Jesus; O King; O Lord Jesus Christ"). However, some have questioned whether Bridget is in fact their author; contemporary religious historian, Eamon Duffy, professor of the History of Christianity at the University of Cambridge and former president of Magdalene College, claims that the prayers probably originated in England in the devotional circles that surrounded Richard Rolle, an English religious writer, Bible translator (1290-1349) or from the English Bridgettines.

Whatever their origin, the prayers were widely circulated in the late Middle Ages and became regular features in Books of Hours and other devotional literature. They were translated into various languages; an early English language version of them was printed in a primer by William Caxton, the first printer in England. The prayers themselves reflect the late medieval tradition of meditation on the passion of Christ, and are structured around the seven last words of Christ. They borrow from patristic and scriptural sources as well as the tradition of devotion to the wounds of Christ.

The prayers began to circulate with various promises of indulgences and other assurances of supernatural graces supposed to attend from their regular recitation over the course of a year. These indulgences were added to the manuscript tradition of several editions of the Books of Hours, and may constitute one major source of the prayers' popularity. They promise, among other things, the release from Purgatory of 15 of the devotee's family members, and that they would keep 15 living family members in a state of grace.[4] Bridget of Sweden, was a devout Christian woman who inspired her own nation and its rulers to live a more religious and moral lifestyle especially through the widely circulated Celestial revelations and her prayers, the Fifteen Oes. In her travels to other nations and cities she would encourage others toward the religious and pious life, even scolding those rulers who she found wanting. She defended the papacy and encouraged Pope Urban I to return the Holy See to Rome from Avignon, Rome being the rightful seat of Saint Peter. Through her revelatory writings and prayers she influenced much of Europe, as her works were added to a number of liturgical texts including the Books of Hours. Her mystical visions inspired others to devotion to Christ and some miracles were reported through veneration of her as a saint.

Her church and convent at Vadstena became a place of sanctuary for other religious women and men including her own daughter, Saint Catherine of Vadstena. Her order spread widely in Sweden and Norway, and played a remarkable part in promoting culture and literature in Scandinavia until is suppression in 1595 during the Protestant Reformation. In England, the Bridgettine convent of Syon Abbey at Isleworth, Middlesex, was royally endowed by Henry V of England in 1415, and became one of the richest, most fashionable, and influential nunneries in the country. By 1515 it expanded to 27 houses, 13 of them in Scandinavia and spread to other lands reached an eventual total of 80. The English convent was abandoned during the reign of Elizabeth I but was reestablished in 1861. It remains until today at Syon House now at Chudleigh in Devon. Work is currently done by the order in India through the Cochin institution and others.

Bridget lived during the time of the Hundred Years War in Europe and was a contemporary of Catherine of Siena, and Julian of Norwich. All three women wrote books of their Revelations. These women are linked by the Norwich Benedictine, Cardinal Adam Easton who wrote the Defensorium Sanctae Birgitta in Norwich, 1389-1391, defending the women's visionary and at times prophetic writings.

In 1999, Pope John Paul II named Bridget as a patron saint of Europe. Her feast is celebrated on July 23, the day of her death. Traditional Roman Catholics continue to celebrate the feast day of "Saint Bridget, Widow" on October 8. Her shrine is at Vadstena convent, the main site of the Brigettine Order that she founded in Sweden.