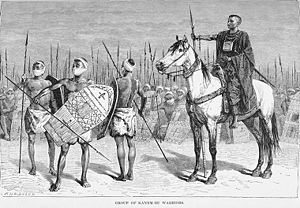 Kanembu warriors and their mounted chief in an illustration from H. Barth's Travels and Discoveries Vol III, 1857.

The Bornu Empire (1396-1893) was a medieval African state of Niger from 1389 to 1893. It was a continuation of the great Kanem-Bornu Kingdom founded centuries earlier by the Sayfawa Dynasty. In time it would become even larger than Kanem incorporating areas that are today parts of Chad, Nigeria and Cameroon. This is a very long continuous history, and the story of this Empire is in the main one of stability and prosperity based principally on commerce, although there were periods of military expansion. Conquered in 1808 by the Fulani Sultanate, after a short lapse the Bornu kingdom was revived as a Sultanate under a new dynasty. That dynasty survived into the colonial period, although two different branches enjoyed client status under different colonial administrations. The Sultan of Bornu still has his seat at Maiduguri, where the Sultanate relocated in 1907. Maidugiru is the capital of Bornu State, Republic of Nigeria and is dominated by the royal palace. The Sultan’s status as chief of the Kanuri people, some 4.3 percent of Nigeria’s population, is an officially recognized office. His role is mainly ceremonial, although he also plays a part within the system of Islamic courts. Only the Sultan of Sokoto ranks higher. The existence of the office of Sultan represents continuity between the African world of today and an ancient African polity. That polity pre-dates colonialism and, at its height, was equal in prosperity and greater in geographical extent than many European states and super-states, and deserves to take its place alongside them in any reconstruction of the story of the rise and fall of empires. At its most stable period, it was said that any woman wearing gold could safely walk the streets unaccompanied, at a time when few women ventured out alone in London or in Paris for fear of attack. Far from being the wild and dangerous places of the European imagination, the towns and villages of the Bornu Empire were safe and secure, prosperous and peaceful.

After decades of internal conflict, rebellions and outright invasion from the Bulala, the once strong Sayfawa Dynasty was forced out of Kanem and back into the nomadic lifestyle they had abandoned nearly 600 years ago. Around 1396, the Kanembu finally overcame attacks from their neighbors (Arabs, Berbers and Hausa) to found a new state in Bornu. Over time, the intermarriage of the Kanembu and Bornu peoples created a new people and language, the Kanuri.

Even in Bornu, the Sayfawa Dynasty's troubles persisted. During the first three-quarters of the fifteenth century, for example, fifteen mais occupied the throne. Then, around 1472 Mai Ali Dunamami defeated his rivals and began the consolidation of Bornu. He built a fortified capital at Ngazargamu, to the west of Lake Chad (in present-day Niger), the first permanent home a Sayfawa mai had enjoyed in a century. So successful was the Sayfawa rejuvenation that by the early sixteenth century Mai Ali Gaji (1497–1515) was able to defeat the Bulala and retake Njimi, the former capital. The empire's leaders, however, remained at Ngazargamu because its lands were more productive agriculturally and better suited to the raising of cattle.

With control over both capitals, the Sayfawa dynasty became more powerful than ever. The two states were merged, but political authority still rested in Bornu. Kanem-Bornu peaked during the reign of the outstanding statesman Mai Idris Aluma (c. 1571–1603).

Aluma is remembered for his military skills, administrative reforms, and Islamic piety. His main adversaries were the Hausa to the west, the Tuareg and Toubou to the north, and the Bulala to the east. One epic poem extols his victories in 330 wars and more than 1,000 battles. His innovations included the employment of fixed military camps (with walls); permanent sieges and "scorched earth" tactics, where soldiers burned everything in their path; armored horses and riders; and the use of Berber camelry, Kotoko boatmen, and iron-helmeted musketeers trained by Turkish military advisers. His active diplomacy featured relations with Tripoli, Egypt, and the Ottoman Empire, which sent a 200-member ambassadorial party across the desert to Aluma's court at Ngazargamu. Aluma also signed what was probably the first written treaty or cease-fire in Chadian history (like many cease-fires negotiated in the 1970s and 1980s, it was promptly broken).

Aluma introduced a number of legal and administrative reforms based on his religious beliefs and Islamic law (sharia). He sponsored the construction of numerous mosques and made a pilgrimage to Mecca (see hajj), where he arranged for the establishment of a hostel to be used by pilgrims from his empire. As with other dynamic politicians, Aluma's reformist goals led him to seek loyal and competent advisers and allies, and he frequently relied on slaves who had been educated in noble homes. Aluma regularly sought advice from a council composed of heads of the most important clans. He required major political figures to live at the court, and he reinforced political alliances through appropriate marriages (Aluma himself was the son of a Kanuri father and a Bulala mother).

Kanem-Bornu under Aluma was strong and wealthy. Government revenue came from tribute (or booty, if the recalcitrant people had to be conquered), sales of slaves, and duties on and participation in trans-Saharan trade. Unlike West Africa, the Chadian region did not have gold. Still, it was central to one of the most convenient trans-Saharan routes. Between Lake Chad and Fezzan lay a sequence of well-spaced wells and oases, and from Fezzan there were easy connections to North Africa and the Mediterranean Sea. Many products were sent north, including natron (sodium carbonate), cotton, kola nuts, ivory, ostrich feathers, perfume, wax, and hides, but the most important of all were slaves. Imports included salt, horses, silks, glass, muskets, and copper.

Aluma took a keen interest in trade and other economic matters. He is credited with having the roads cleared, designing better boats for Lake Chad, introducing standard units of measure for grain, and moving farmers into new lands. In addition, he improved the ease and security of transit through the empire with the goal of making it so safe that he took pride in saying that a woman had only God to fear if she walked the streets alone, even if she was wearing gold.

The administrative reforms and military brilliance of Aluma sustained the empire until the mid-1600s, when its power began to fade. By the late 1700s, Bornu rule extended only westward, into the land of the Hausa of modern Nigeria.

Around that time, Fulani people, invading from the west, were able to make major inroads into Bornu. By the early nineteenth century, Kanem-Bornu was clearly an empire in decline, and in 1808 Fulani warriors conquered Ngazargamu. Usman dan Fodio led the Fulani thrust and proclaimed a holy war (also called the Fulani War) on the allegedly irreligious Muslims of the area. His campaign eventually affected Kanem-Bornu and inspired a trend toward Islamic orthodoxy. However, Muhammad al-Kanem, an advisor to the royal family and a religious scholar contested the Fulani advance.

Putting together an alliance of Shuwa Arabs, Kanembu, and other seminomadic peoples, he moved about 80 miles to the north-east and built a new capital at Kukawa (in present-day Nigeria) in 1814, continuing the Bornu polity. Sayfawa mais remained titular monarchs until 1846. In that year, the last mai, in league with the Ouaddai Empire, precipitated a civil war. It was at that point that Kanem's son, Umar, became the 1st Sultan, or Shehu, of Bornu, thus ending one of the longest dynastic reigns in regional history.

Although the dynasty ended, the kingdom of Kanem-Bornu survived. Umar (d. 1881) could not match his father's vitality and gradually allowed the kingdom to be ruled by advisers (wazirs). Bornu began a further decline as a result of administrative disorganization, regional particularism, and attacks by the militant Ouaddai Empire to the east. The decline continued under Umar's sons. In 1893, Rabih az-Zubayr leading an invading army from eastern Sudan, conquered Bornu. Rabih had been an officer in the army of a Sudanese prince who unsuccessfully revolted against Egyptian rule. When the revolt failed, Rabih led his platoon towards the West, gathering additional recruits and weaponry as he crossed the continent. He increased his militia from about 400 to about 5,000 men. After capturing Bornu, he established a city-state based at Dikwa, to the south of Lake Chad from where he engaged with the army of the Fulani Sultanate. It was at this time that the French entered the region, having decided that this would be within their sphere of influence as the European powers were dividing the Continent up between themselves. Shifting his attention from the Fullani to the French, Rabih confronted them further to the South. He was defeated, and killed, at a battle in 1900. His son, Fad-el-Allah managed to rally enough troops to harass the French and also contacted the British to see if an alliance against the French might prove mutually attractive. He was defeated and killed by the French the following year, while actually on British territory.[1] He had also managed to take the Shehu of Bornu hostage. After Fad-el-Allah’s defeat, the French re-established the Sultan at Dikwa but imposed a hefty fine on him to compensate for their trouble, or possibly in tribute.[2] The area, however, was soon split between three colonial powers, France, Germany and Great Britain, complicating the survival of the Sultanate.[3]

The Shehu chose to re-locate to the British Protectorate of Northern Nigeria, possibly because the British said that they would establish him in their territory and by moving he avoided compensating the French. He entered British territory in 1902, eventually settling in Yerwa in 1907. The Sultan of Bornu, like other Nigerian Emirs and Paramount Chiefdoms continues to exist, although their role is almost entirely ceremonial. Nonetheless, the Sultan of Bornu, who still lives at Yerwa (also known as Maiduguri), is the second in seniority in the House of Chiefs after the Sultan of Sokoto, whose ancestor, Dan Fodio, had conquered the Bornu capital in 1808. Bornu state, which comprises much of ancient Bornu, is the largest state in modern day Nigeria although some parts of the old kingdom are in the state of Yobe. The sultans palace in Yerwa dominates the city.[4] The Sultan is recognized as the leader of some 4.3 percent of the people of Nigeria, who are of Kanuri descent. Others live in Chad and in Cameroon.[5] Another lineage continued under French auspices at Dikwa (now in Cameroon), where the title Mai was re-instated with the Sultanate of Abba Mustafa I (in office 1937-1950). In 1942, the seat moved from Dikwa to Bama, some 40 miles away. At least one Sultan has held both offices, though not concurrently.[6]

Retrieved from https://www.newworldencyclopedia.org/p/index.php?title=Bornu_Empire&oldid=1095076
Categories:
Hidden category:
This page was last edited on 12 January 2023, at 01:56.
Content is available under Creative Commons Attribution/Share-Alike License; additional terms may apply. See Terms of Use for details.