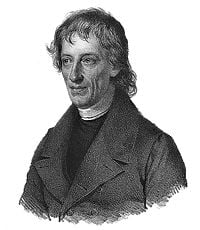 Bernard Placidus Johann Nepomuk Bolzano (October 5, 1781 – December 18, 1848) was a Czech mathematician, theologian, philosopher, and logician. His logical analysis of mathematical problems made him a pioneer in geometry and calculus. His philosophical applications of logic contributed to the development of analytic philosophy and phenomenology. In his most well-known work, Theory of Science, he attempted to provide a logical and systematic way to approach all the sciences. His theological contributions are less notable; although he was ordained as a Catholic priest, he harbored many doubts about Christianity.

Bolzano was born in 1781, into a devout Roman Catholic family in Prague, which was then part of the Austrian Empire. His father, Bernard Pompeius Bolzano, was a native of Lombardy who had moved to Prague at a young age and had married Maria Cecelia Maurer, the German-speaking daughter of a Prague merchant. Bernard was the fourth of their twelve children and one of only two who lived to adulthood. He was strongly influenced by his Catholic upbringing both at home and at school. His father was a highly charitable man who expressed his religious beliefs through his philanthropic efforts, which included the founding an orphanage. Young Bernard also attended a school run by the Roman Catholic order of the Piarists. These experiences left Bolzano more impressed by the humanitarian aspects of Christianity than its doctrines.

In 1796, Bolzano enrolled in Prague's Charles University where he studied mathematics, philosophy, and physics. He was especially interested in the Philosophy of Mathematics and was influenced by the writings of the German mathematician Abraham Gotthelf Kästner. In 1800, he went against his father's wishes by studying theology at Charles Univesrsity. Meanwhile, he also pursued a doctoral degree in mathematics, which he received in 1804. Soon afterwards, Bolzano was ordained as a Catholic priest and appointed to Charles University's chair of philosophy of religion, which had just been created by the Austrian emperor Francis I as a means of strengthening the empire against the influences of the Enlightenment and the French Revolution.

Bolzano held his position at the university until 1819, and was also elected dean of the philosophy department in 1818. During this time, he published his first book, Beyträge zu einer begründeteren Darstellung der Mathematik (Contributions to a More Well-founded Presentation of Mathematics), in which he opposes Kant's views on mathematics. His sermons and lectures on philosophy and religion were highly popular with the students but disturbing to Church and government officials. Instead of reinforcing Catholic doctrine, he voiced his own liberal opinions, advocating pacifism and socialism. He criticized the government for discrimination and pleaded the cause of minority groups within the empire, such as the Jews and the Czechs. He was suspended from his position in 1819, and forced to resign when he refused to recant his political beliefs. After a lengthy trial held by the Catholic Church, he was forbidden from preaching in public or publishing any of his writing.

Subsequently, Bolzano retired to live with friends in the small Bohemian village of Techobuz. In spite of the government's censorship, he continued to develop some of his most important ideas, publishing books either anonymously or outside of the Austrian Empire. He wrote two major philosophical works during this time: His most significant religious discourse, Lehrbuch der Religionswissenschaft (Textbook of the Science of Religion), in 1834, and his masterpiece, Wissenschaftslehre (Theory of Science), in 1837. He also wrote an account on Leibnizian metaphysics called Athanasia (Immortality) in 1827. Bolzano's great mathematical work, Paradoxien des Unendlichen (The Paradoxes of the Infinite), was not published until three years after his death and was greatly admired by eminent logicians, including Charles Peirce, Georg Cantor, and Richard Dedekind.

Bolzano spent the last years of his life in Prague with his brother Johann. In 1848, he succumbed to chronic respiratory illness and died of a cold. He did not achieve great recognition until many years after his death, when much of his unfinished work, including his treatise on philosophy of mathematics, Grössenlehre (Theory of Quantity), was published. Otto Stolz also rediscovered many of his lost journal articles and republished them in 1881.

In his philosophy, Bolzano developed an ontology in which the world consists of "actual" and "non-actual" objects. Actual objects are further divided into "substances" such as tables or human beings and the "adherents" to substances such as colors or mental states. Non-actual objects consist of non-material things, such as numbers and what Bolzano called "Sätze-an-sich" ("propositions-as-such"). The Sätze-an-sich include what are essentially logical axioms and abstract truths, which Bolzano believed to exist independently of the human mind.

In his 1837 Theory of Science, he attempts to provide logical foundations for all sciences, building on abstractions like part-relation, abstract objects, attributes, sentence-shapes, ideas-as-such, propositions, sums and sets, collections, substances, adherences, subjective ideas, judgments, and sentence-occurrences. These attempts are basically an extension of his earlier thoughts in the philosophy of mathematics, for example his 1810 Beyträge, where he refutes Kant's approach to mathematics by emphasizing the distinction between the objective relationship between logical consequences and our subjective recognition of these connections. For Bolzano, it was not enough to merely have confirmation of natural or mathematical truths, but rather it was the proper role of the sciences—both pure and applied—to seek out justification in terms of the fundamental truths that may or may not appear to be obvious to our intuitions.

"Sätze an sich" (Propositions-as-such) is a basic notion in Bolzano's Theory of Science. Before giving a definition, Bolzano first introduces the notions of proposition—spoken, written, or otherwise—and idea. "The grass is green" is a proposition because, in this connection of words, something is said or asserted. "Green grass," however, is only an idea in that it represents something but does not say or assert anything. Bolzano's notion of proposition is fairly broad; "A rectangle is round" counts as a proposition, even though it is false by virtue of self-contradiction, because it is composed in an intelligible manner out of intelligible parts. A Sätze an sich is what is thought when one thinks about a proposition and can still ask oneself whether or not this proposition has been said or thought by someone or not. Hence, a Sätze an sich states that something is or is not, with no condition on it being true or false, or being spoken or thought. Bolzano's use of the term "an sich" differs greatly from that of Kant.

According to Bolzano, all propositions are composed of three (simple or complex) elements: A subject, a predicate, and a copula. Instead of the more traditional copulative term "is," Bolzano prefers "has." The reason for this is that "has," unlike "is," can connect a concrete term, such as "Socrates," to an abstract term such as "baldness." "Socrates has baldness" is, according to Bolzano, preferable to "Socrates is bald" because the latter form is less basic. "Bald" is itself composed of the elements "something," "that," "has," and "baldness." Bolzano also reduces existential propositions to this form: "Socrates exists" would simply become "Socrates has existence."

Bolzano's first work in the field of mathematics was his 1804 doctoral dissertation on geometry, in which he attempted to solve Euclid's parallel postulate. He was also the first person to attempt to prove the theory of continuous simple closed curves which would later be called the Jordan curve theorem.

Bolzano made ground-breaking contributions to the foundations of mathematical analysis in his 1817, Purely Analytic Proof, in which he introduces a fully rigorous ε-δ definition of a mathematical limit and the first purely analytic proof of the Intermediate Value Theorem (also known as Bolzano's Theorem). These findings preceded similar ones by Augustin Louis Cauchy some years later and helped solve some of the fundamental contradictions which mathematicians were encountering in calculus.

Bolzano's work in the understanding of infinity was an important precursor to the development of set theory in mathematics. In Paradoxes of the Infinite he introduces the concept of a "set" ("Menge") for the first time. He gives examples of one-to-one correspondences between the elements of an infinite set and the elements of a proper subset and describes some of the paradoxes of infinite sets. This understanding of sets was later taken up and developed by Georg Cantor, who is the official originator of set theory.

Throughout his life, Bolzano was plagued by doubts about religion and the doctrines of Christianity. He concluded that a religious doctrine could only be justified if believing in it led to a moral good or conferred some benefit on humankind. Bolzano's lifelong belief in the importance of logical analysis forced him to reject Kant's philosophy, especially his categorical imperative and ideas of the postulates. He preferred a more humanistic and utilitarian form of ethics.

Bolzano's work would play an important role in the development of analytic philosophy and phenomenology. He had an impact on key figures such as Gottlob Frege, Edmund Husserl, and Bertrand Russell. Frege, inspired by Bolzano's purely analytic approach to mathematics, sought to eliminate any appeal to intuition in basic mathematical proofs. Russell was similarly aided by Bolzano's work in his defense of logicism in Principia Mathematica. Husserl was especially impressed by Theory of Science, saying that it "far surpasses anything that world literature has to offer in the way of a systematic sketch of logic." He went on to use some of Bolzano's ontological concepts from that work in his development of phenomenology. Bolzano's work in logic also played a role in Kazimierz Twardowski's efforts to introduce scientific philosophy to Poland through the Lwów-Warsaw School of Logic.