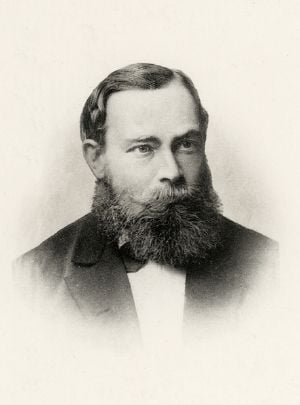 Friedrich Ludwig Gottlob Frege (November 8, 1848, Wismar – July 26,925, Bad Kleinen) was a German mathematician who became a logician and philosopher. He helped found both modern mathematical logic and analytic philosophy. Although he remained obscure during his lifetime, especially to English-speaking logicians, mathematicians, and philosophers, he has now come to be regarded as one of the four or so most important logicians in all of human history.

Frege's father was a schoolteacher whose specialty was mathematics. Frege began his studies at the University of Jena in 1869, moving to Göttingen after two years, where he received his Ph.D. in mathematics, in 1873. According to Sluga (1980), the nature of Frege's university education in logic and philosophy is still unclear. In 1875, he returned to Jena as a lecturer. In 1879, he was made associate professor, and in 1896, professor. His children all having died before reaching maturity, he adopted a son in 1905. Frege retired in 1918 and wrote until his death.

Frege's work was not widely appreciated during his lifetime, although he did debate in print, and correspond with, Ernst Schroder, Peano, Husserl, and Cantor. Bertrand Russell discovered Frege's writings around 1900 and became an admirer, as did Ludwig Wittgenstein somewhat later. These admirers assured Frege's influence and reputation in certain restricted circles. Frege had but one student of note, albeit a consequential one: Rudolf Carnap. Frege's work became widely known in the English-speaking world only after World War II; English translations of Frege's writings, which first appeared in 1950, came to have an enormous influence on analytic philosophy. Frege also became better known thanks to the emigration to the United States of central European philosophers and logicians who knew and respected Frege's work, including Carnap, Alfred Tarski, and Kurt Gödel.

Frege is widely regarded today as a logician on a par with Aristotle, Kurt Gödel, and Alfred Tarski. His 1879 Begriffsschrift (Concept Script) marked a turning point in the history of logic. The Begriffsschrift broke much new ground, including a clean treatment of functions and variables. Frege wanted to show that mathematics grew out of Aristotelian logic, but in so doing devised techniques that took him far beyond that logic. In effect, he invented axiomatic predicate logic, in large part thanks to his invention of quantified variables, which eventually became ubiquitous in mathematics and logic, and solved the medieval problem of multiple generality in which traditional logic could not prove certain intuitively obvious inferences. Hence the logical machinery essential to Bertrand Russell's theory of descriptions and Principia Mathematica (with Alfred North Whitehead), and to Gödel's incompleteness theorems, is ultimately due to Frege.

Frege was a major advocate of the view that arithmetic is reducible to logic, a view known as logicism. In his Grundgesetze der Arithmetik (1893, 1903), published at its author's expense, he attempted to derive the laws of arithmetic from axioms he asserted as logical. Most of these axioms were carried over from his Begriffsschrift, though not without some significant changes. The one truly new principle was one he called the Basic Law V: the "value-range" of the function f(x) is the same as the "value-range" of the function g(x) if and only if ∀x[f(x) = g(x)]. In modern notation and terminology, let {x|Fx} denote the extension of the predicate Fx, and similarly for Gx. Then Basic Law V says that the predicates Fx and Gx have the same extension iff ∀x[Fx ↔ Gx].

As Vol. 2 of the Grundgesetze was about to go to press in 1903, Bertrand Russell wrote to Frege, showing how to derive [[Russell's paradox] from Basic Law V. (This letter and Frege's reply thereto are translated in Jean van Heijenoort 1967.) Russell had shown that the system of the Grundgesetze was inconsistent. Frege wrote a hasty last-minute appendix to vol. 2, deriving the contradiction and proposing to eliminate it by modifying Basic Law V. Frege's proposed remedy was subsequently shown to imply that there is but one object in the universe of discourse, and hence is worthless.

Recent work has shown, however, that much of the Grundgesetze can be salvaged in any of several ways:

Frege's work in logic was little recognized in his day, in considerable part because his peculiar diagrammatic notation had no antecedents; it has since had no imitators. Moreover, until Principia Mathematica appeared, 1910-1913, the dominant approach to mathematical logic was that of George Boole and his descendants, especially Ernst Schroder. Frege's logical ideas nevertheless spread through the writings of his student Rudolf Carnap and of other admirers, particularly Bertrand Russell.

Frege is one of the founders of analytic philosophy, mainly because of his contributions to the philosophy of language, including the:

As a philosopher of mathematics, Frege loathed appeals to psychologistic or "mental" explanations for meanings (such as idea theories of meaning). His original purpose was very far from answering questions about meaning; instead, he devised his logic to explore the foundations of arithmetic, undertaking to answer questions such as "What is a number?" or "What objects do number-words ("one," "two," etc.) refer to?" But in pursuing these matters, he eventually found himself analysing and explaining what meaning is, and thus came to several conclusions that proved highly consequential for the subsequent course of analytic philosophy and the philosophy of language.

It should be kept in mind that Frege was employed as a mathematician, not a philosopher, and published his philosophical papers in scholarly journals that often were hard to access outside of the German speaking world. He never published a philosophical monograph and the first collections of his writings appeared only after WWII. Hence despite Bertrand Russell's generous praise, Frege was little known as a philosopher during his lifetime. His ideas spread chiefly through those he influenced, such as Russell, Wittgenstein, and Rudolf Carnap, and through Polish work on logic and semantics.

A great deal of Frege's writings were not translated into English until the 1950s. Thought, is one of those such writings. It was published in 1918 as the first part of a series of three papers entitled "Logical Investigations." Along with "On Sense and Reference," it is one of Frege's most influential and widely discussed papers" (Beaney, 1997). Thought is filled with great quotes and is a treasure chest for anyone interested in Frege. Here is one of those quotes:

"Just as 'beautiful' points the way for aesthetics and 'good' for ethics, so do words like 'true' for logic."

The distinction between Sinn and Bedeutung (usually but not always translated as Sense and Reference) was an innovation of Frege in his 1892 paper Über Sinn und Bedeutung (On Sense and Reference), which is still widely read today. According to Frege, sense and reference are two different aspects of the meaning of at least some kinds of terms (Frege applied "Bedeutung" mainly to proper names and, to a lesser extent, sentences). Roughly, a term's reference is the object it refers to and its sense is the way in which it refers to that object.

Frege intended that the following three papers be published together in a book titled Logical Investigations. Yale University Press, 1977. ISBN 9780300021271