Andrei Rublev (Russian: Андре́й Рублёв, also transliterated Andrey Rublyov, born in the 1360s, died 1427 or January 29, 1430) is considered to be the greatest medieval Russian painter of Orthodox icons and frescoes.

An icon is a religious image or representation of an object, deity or sacred figure or event. Originally, in Greek, "eikon" denoted an artistic depiction of an object without the necessity of sanctity or veneration. With the passage of time, however, icons became popular religious tools, used within the Christian traditions of Eastern Orthodoxy, to evoke veneration and to educate the masses.

Icons are most widely used in Orthodox Churches. They are generally flat panel paintings depicting a holy person or object such as Jesus, Mary, saints, angels, or the cross. The iconic style, largely associated with the work of the great icon painters like Rublev, is a two-dimensional representation that does not strive for realism, considering such realistic portrayals as distracting from the purpose of the image, which is to inspire veneration of the person depicted and not a focus on the image itself.

There is little information about his life. It is not known where he was born. Andrei Rublev probably lived in the Trinity-St. Sergius Lavra near Moscow under Nikon of Radonezh, who became hegumen after the death of Sergii Radonezhsky (1392).

The first mention of Rublev is in 1405 when he decorated icons and frescos for the Cathedral of the Annunciation of the Moscow Kremlin in company with Theophanes the Greek and Prokhor of Gorodets. His name was the last of the list of masters as the junior both by rank and by age. Theophanes was an important Byzantine master who moved to Russia, and is considered to have trained Rublev.

Chronicles tell us that in 1408 he painted (together with Daniil Cherni) the Assumption Cathedral in Vladimir and in 1425–1427 the Cathedral of St. Trinity in the Trinity-St. Sergius Lavra. After Daniil's death Andrei came to Moscow's Andronikov Monastery where he painted his last work, the frescoes of the Savior Cathedral.

He is also believed to have painted at least one of the miniatures in the Khitrovo Gospels. 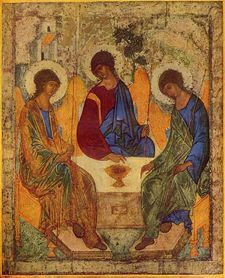 Rublev's famous icon of the Trinity.

The use and making of icons entered Kievan Rus' following its conversion to Orthodox Christianity from the Eastern Roman (Byzantine) Empire in 988 C.E. As a general rule, these icons strictly followed models and formulas hallowed by usage, some of which had originated in Constantinople. As time passed, the Russians—notably Andrei Rublev and Dionisius—widened the vocabulary of iconic types and styles far beyond anything found elsewhere. The personal, improvisatory and creative traditions of Western European religious art are largely lacking in Russia before the seventeenth century, when Simon Ushakov's painting became strongly influenced by religious paintings and engravings from Protestant as well as Catholic Europe.

In the mid-seventeenth century, changes in liturgy and practice instituted by Patriarch Nikon resulted in a split within the Russian Orthodox Church. The traditionalists, the persecuted "Old Ritualists" or "Old Believers," continued the traditional stylization of icons, while the State Church modified its practice. From that time icons began to be painted not only in the traditional stylized and nonrealistic mode, but also in a mixture of Russian stylization and Western European realism, and in a Western European manner very much like that of Catholic religious art of the time. The Stroganov movement and the icons from Nevyansk rank among the last important schools of Russian icon-painting.

The only work authenticated as entirely that of Rublev is the icon of the Trinity, ca. 1410 (shown at left), currently in the Tretyakov Gallery, Moscow. It is based upon an earlier icon known as the "Hospitality of Abraham" (illustrating Genesis 18). Rublev removed the figures of Abraham and Sarah from the scene, and through a subtle use of composition and symbolism changed the subject to focus on the Mystery of the Trinity.

It is his most famous work, as well regarded as one of the highest achievements of Russian art.[1] Trinity depicts the three angels who visited Abraham at the oak of Mamre, but the painting is full of symbolism and often interpreted as an icon of the Holy Trinity.[2]

A little is known about Trinity's history, scientists can only make suppositions. Even the authorship of Rublev is questioned sometimes. Different sources conjecture the date of creation as 1408-1425, 1422-1423 or 1420-1427. The official version states 1411 or 1425-1427. In 1575 Ivan the Terrible ordered to decorate it with gold, which was renewed in 1600 during the tsardom of Boris Godunov. The original is currently held in the Tretyakov Gallery in Moscow. Two copies were made (in 1598-1600 and in 1926-1928), both kept in Troitse-Sergiyeva Lavra's Cathedral iconostasis.

In Rublev's art, two traditions are combined: the highest asceticism and the classic harmony of Byzantine mannerism. The characters of his paintings are always peaceful and calm. After some time his art came to be perceived as the ideal of Church painting and of Orthodox iconography.

Andrei died at Andronikov Monastery on January 29, 1430 (this date is still questionable). His work has influenced many different artists including Dionisy. At the Stoglavi Sobor (1551) Rublev's icon style was announced as a model for church painting. He was canonized a saint in 1988 by the Russian Orthodox Church. The church celebrates his feast day on January 29[3] and July 4.[4]

Since 1959 the Andrei Rublev Museum has been open at the Andronnikov Monastery, displaying the art of his works and his epoch.

In 1966, Andrei Tarkovsky made his celebrated film, Andrei Rublev from a screenplay written by Andrei Konchalovsky and Tarkovsky. Andrei Rublev is set against the background of fifteenth century Russia. Although the film is only loosely based on the life of Andrei Rublev, its depiction of medieval Russia is realistic. Tarkovsky created a film that shows the artist as "a world-historic figure" and "Christianity as an axiom of Russia’s historical identity"[5] during a turbulent period of Russian history, that ultimately resulted in the Tsardom of Russia. The film is about the essence of art and the importance of faith and shows an artist who tries to find the appropriate response to the tragedies of his time. The film is also about artistic freedom and the possibility and necessity of making art for, and in the face of, a repressive authority and its hypocrisy, technology and empiricism, by which knowledge is acquired on one's own without reliance on authority, and the role of the individual, community, and government in the making of both spiritual and epic art.

Because of the film's religious themes and political ambiguity, it was unreleased in the atheistic and authoritarian Soviet Union for years after it was completed, except for a single screening in Moscow. A cut version of the film was shown at the Cannes Film Festival in 1969, where it won the FIPRESCI prize. In 1971 a censored version of the film released in the Soviet Union. The film was further cut for commercial reasons upon release in the US in 1973. Because of this several versions of the film exist. Today Andrei Rublev is widely regarded as a masterpiece and one of Tarkovsky's best works.[6]

The 1998 horror novel The Vampire Armand by Anne Rice featured a young man, who was born himself in Russia under the name of Andrei (his last name is not revealed). The story claims that 'Andrei' was a renowned icon painter himself, his history bearing a great resemblance to Rublev's.