Ivan IV Vasilyevich (Russian: Иван IV Васильевич) (August 25, 1530 – March 18, 1584) was the Grand Duke of Muscovy from 1533 C.E. to 1547 C.E. and was the first ruler of Russia to assume the title of tsar. His long reign saw the conquest of Tartary and Siberia and subsequent transformation of Russia into a multiethnic and multi-confessional state, yet his life among his family and close advisors degenerated into a pathetic and disgusting biography. This tsar retains his place in the Russian tradition simply as Ivan Grozny, which translates into English as Ivan the Fearsome. He is commonly referred to in English as Ivan the Terrible.

Ivan (or Ioann, as his name is rendered in Church Slavonic) was a long-awaited son of Vasili III. Upon his father's death, Ivan formally came to the throne at the age of three, but his minority was dominated by regents. Initially his mother Elena Glinskaya acted as regent. Under her leadership Moscow successfully waged wars with Lithuania, the Crimean Khanate, and the Tatars. She carried out monetary reforms, introducing the smallest unit—kopeyka. She died, however, when Ivan was only eight (it is rumored she was poisoned). She was replaced as regent by boyars (feudal aristocrats one rank below the princes) from the Shuisky family until Ivan assumed power in 1544. According to his own letters, Ivan customarily felt neglected and offended by the mighty boyars from the Shuisky and Belsky families. In one letter, he painfully recalls an episode when one drunken boyar put his dirty boots on Ivan's bed. These traumatic experiences doubtlessly contributed to his hatred of the boyars and to his mental instability. Constant struggle among the boyars formed a suspicious, cruel character in Ivan. He was known to throw cats and dogs out of the Kremlin windows, among other cruel acts. At the age of 13 he ordered that his mentor, boyarin Shuisky, be beaten to death.

Ivan was crowned tsar with Monomakh's Cap at the Cathedral of the Dormition at age 16 on January 16, 1547. On February 13, he married Anastasia Romanovna. Although she was from a less prominent family, she brought love and reconciliation in his life for a while and was dearly loved by him. They had three sons—Fyodor (future tsar), Ivan (killed by Ivan IV in 1581), and Dmitriy (died in Uglitch of unknown causes)—and three daughters, giving rise to the new dynasty of the Romanov's.

The early part of Ivan’s reign was one of peaceful but radical reforms and modernization. Ivan revised the law code (known as the sudebnik), created a standing army (the streltsy), introduced a new system of government (prikaz, a prototype of state departments), established a council of the nobles (known as the Zemsky Sobor, or Chosen Council), and confirmed the position of the Church with the Stoglav (Council of the Hundred Chapters), which unified the rituals and ecclesiastical regulations of the entire country. During his reign, the first printing press was introduced to Russia (although the first Russian printers Ivan Fedorov and Pyotr Mstislavets had to flee from Moscow to Grand Duchy of Lithuania). Meanwhile, diplomatic relations with England, Belgium, and Holland were established.

In 1547 Hans Schlitte, the Agent of Tsar Ivan, employed handicraftsmen in Germany for work in Russia. However, all f these handicraftsmen were arrested in Lübeck at the request of Poland and Livonia. The German merchant companies ignored the new port built by Tsar Ivan on the river Narva in 1550 and delivered the goods still in the Baltic ports owned by Livonia. Russia remained isolated from sea trade.

Ivan formed new trading connections, opening up the White Sea and the port of Arkhangelsk to the Muscovy Company of English merchants. He also annexed the Kazan Khanate in 1552 and the Astrakhan Khanate to the east, thus transforming Russia into a multinational and multi-confessional state. He had St. Basil's Cathedral constructed in Moscow to commemorate the seizure of Kazan Khanate. Legend holds that Ivan was so impressed with the structure that he had the architects blinded, so that they could never design anything as beautiful again.

Other less positive aspects of this period include the introduction of the first laws restricting the mobility of the peasants, which would eventually lead to serfdom. The beginning of dramatic change in Ivan's personality is traditionally linked to his near-fatal illness in 1553. Ivan suspected boyars of plotting to replace him on the throne with his cousin, Vladimir of Staritsa. In addition, during that illness Ivan had asked the boyars to swear an oath of allegiance to his eldest son, an infant at the time. Many boyars refused, for doctors deemed the tsar's health too hopeless to survive. This angered Ivan and added to his distrust of the boyars. The year 1560 is traditionally marked as year of his mental and emotional breakdown. His beloved wife Anastasia Romanovna died after 13 years of marriage and Ivan blamed boyars for her death. Shortly after, his former supporters were, one by one, executed, exiled, or forced to flee, along with their families. Previously famous for his ascetic lifestyle, Ivan began to behave oppositely. He hosted lavish feasts and orgies. To overcome opposition, Ivan threatened to resign in 1564. While boyar factions contemplated what to do, the population panicked and forced them to accept Ivan's conditions—demand for dictatorial power.

The next step was establishment of the Oprichnina. The Oprichnina was the section of Russia directly ruled by Ivan and policed by his personal servicemen, the Oprichniks. The whole system of Oprichnina has been viewed by some historians as a tool against the omnipotent hereditary nobility of Russia, the boyars, who opposed the absolutist drive of the tsar, while others have interpreted it as a sign of the paranoia and mental deterioration of the tsar. There followed brutal reprisals and mass murders of innocent people, including Metropolitan Philip and Prince Alexander Gorbatyi-Shuisky. 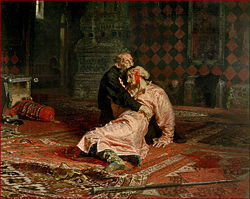 Ivan the Terrible killing his son by Ilya Repin

The latter half of Ivan's reign was far less successful. He supported Yermak's conquest of Siberia and adopted a policy of empire-building, which led him to launch a victorious war of seaward expansion to the west, only to find himself fighting the Swedes, Lithuanians, Poles, and the Livonian Teutonic Knights.

Because Ivan gradually grew unbalanced and violent, the Oprichniks under Malyuta Skuratov soon got out of hand and became murderous thugs. They murdered nobles and peasants, and recruited men to fight the war in Livonia. Depopulation and famine ensued. What had been by far the richest area of Russia became the poorest. 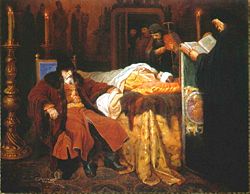 Ivan's murder of his son brought about the extinction of the Rurik Dynasty and the Time of Troubles.

In a dispute with the Novgorod Republic, Ivan ordered the Oprichniks to murder the inhabitants of the city. All towns between Moscow and Novgorod were plundered. Between thirty and forty thousand people were killed. However, the official death toll only named approximately 1,500 Novgorod nobles and 1,500 peasants.

Khan Devlet I Giray of Crimea repeatedly devastated Moscow region and burnt down Moscow in 1571.

In 1581, Ivan beat his pregnant daughter-in-law for wearing immodest clothing, causing a miscarriage. His son, also named Ivan, upon learning of this, engaged in a heated argument with his father which resulted in the son's accidental death. This event is depicted in the famous painting by Ilya Repin, Ivan the Terrible and his son Ivan on Friday, November 16, 1581 better known as Ivan the Terrible killing his son. 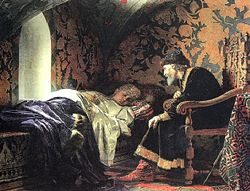 In the late years of his reign Ivan turned his attention again to territorial conquest, this time in the eastern direction—Siberia. In 1577, 1650 troops under the leadership of Yermak crossed over the Ural Mountains. By heavy use of muskets, which were introduced to Russian troops only decades previous, and applying tactics that restricted mobility of the famous Tatar cavalry, Yermak crushed the outnumbering Tatar troops. Within one year Siberian Khanate was conquered and Siberia became a part of Russia.

Ivan died while playing chess with Bogdan Belsky on March 18, 1584, a date which had previously been prophesied for his death. When Ivan's tomb was opened during renovations in the 1960s, his remains were examined and discovered to contain very high amounts of mercury, indicating a high probability that he was poisoned. Modern suspicion falls on his advisors Belsky and Boris Godunov, who became tsar in 1598.

Three days earlier, Ivan had allegedly attempted to rape Irina, Godunov's sister and Fyodor's wife. Her cries attracted Godunov and Belsky to the noise, whereupon Ivan let Irina go, but Belsky and Godunov considered themselves marked for death. The tradition says that they either poisoned or strangled Ivan in fear for their own lives. The mercury found in Ivan's remains may also be related to treatment for syphilis, which Ivan is suspected of having. Upon Ivan's death, the ravaged kingdom was left to his unfit and childless son Fyodor.

The English word terrible is usually used to translate the Russian word grozny in Ivan's nickname, but the modern English usage of terrible, with a derogatory connotation of bad or evil, does not precisely represent the intended meaning. Grozny's meaning is closer to the original usage of terrible: inspiring fear or terror, dangerous, formidabl, threatening, or awesome. Perhaps a translation closer to the intended sense would be Ivan the Fearsome. The Russian people gave Ivan this nickname after he seized Kazan.