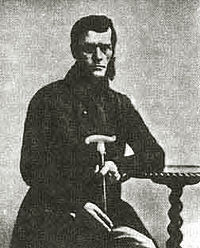 Ivan Vasilievich Kireevsky (April 3, 1806 – June 23, 1856) was a Russian literary critic and philosopher who, together with Aleksey Khomyakov, co-founded the Slavophile movement. The Slavophile movement originated in Moscow in the 1830s. Drawing on the works of Greek patristics, the poet Aleksey Khomyakov (1804-60) and his devoutly Orthodox friends elaborated a traditionalistic doctrine that Russia has its own distinct way and doesn't have to imitate and mimic Western institutions. The Russian Slavophiles denounced Western culture and "westernizations" by Peter the Great and Catherine the Great, and some of them even adopted the traditional pre-Petrine dress.

The doctrines of Khomyakov, Kireevsky, Konstantin Aksakov (1817-60), and other Slavophiles had a deep impact on Russian culture, including the Russian Revival school of architecture, The Five Russian composers, the novelist Nikolai Gogol, the poet Fyodor Tyutchev, the lexicographer Vladimir Dahl, and others. Their struggle for purity of the Russian language had something in common with aesthetic views of Leo Tolstoy. The Slavophiles believed that Russia would play a crucial role in world history precisely because they were backward; they argued that Russia did not have the vices that came with "Westernization."

Ivan Kireevsky and his brother Pyotr were born into a cultivated noble family of considerable means. Their father had read Enlightenment philosophy, and developed a strong distaste for French atheism. He felt so passionately that he would burn heaps of Voltaire's books, acquired specifically for the purpose.[1] Ivan's father contracted a fatal disease while caring for wounded soldiers during the French invasion of Russia. Kireevsky was just six years old at the time of his father's death. He was raised in an intellectual milieu, which included his maternal uncle, Vasily Zhukovsky, his step-father, A. A. Yelagin who was also well-read in Romantic philosophy and the mother, and Madame Avdotia Yelagina, an influential lady who held a brilliant salon in Moscow. Zhukovsky was Russia's foremost poet of the 1820s, and was an important precursor to Alexander Pushkin. Avdotia professed her disdain for Peter the Great because of his treatment of his wife, Eudoxia Lopukhina and the Lopukhin family, to which she was related. Kireevsky's father's distaste for French culture and his mother's distrust of post-Petrine officialdom served to influence for his views on Russia and its history.

Starting in 1821, Kireevsky attended Moscow University, where he became interested in contemporary German philosophy and joined the circle of "wisdom-lovers" (or Lyubomudry), led by Dmitry Venevitinov and Vladimir Odoevsky. He was particularly impressed by the teachings of Friedrich Schelling, whose representation of the world as a living organism was in tune with Kireevsky's own intense dislike of European rationalism and fragmentedness. Kireyevsky's original literary works do not give him a place in the history of Russian literature, but he did gain a measure of fame by publishing the penetrating analysis of contemporary authors. His 1828 review of Alexander Pushkin's]] poetry, written in "purple prose" and entitled "Some Observations about the Character of Pushkin's Poetry," contained the first in-depth assessment of Pushkin's singular achievement, the Romantic novel in verse, Eugene Onegin. Later, Kireevsky would exchange letters with Pushkin and publish his works in his short-lived periodical Evropeets (The European).

After his proposal was refused by his cousin, Kireevsky set out for Europe, where he attended the lectures of Schelling, Friedrich Schleiermacher, Georg Hegel, and French historian, Jules Michelet. During his travels, he perceived the foundations of Western society, based on individualism, to be rotten. He would later contrast with the integratedness (sobornost) of Russian society.[2] Back in Moscow by 1832, he "united all the literary aristocracy" (as Pogodin said) under the aegis of Evropeets. The journal was banned after two issues, but not before Kireevsky published his large article, The Nineteenth Century, his first extended critique of Western philosophy and values.

The failure of Evropeets exacerbated Kireevsky's disappointment with Russian intellectuals and elites. He married and applied himself whole-heartedly to family life. Many critics, starting with Alexander Herzen, tended to attribute the twelve-year hiatus in Kireevsky's literary career to his Oblomovian inclination to indecision and inaction.[3] Koreevsky's whole literary output consists of a dozen full-length articles and may be collected within a single volume.

It was not until the early 1840s that Kireevsky reappeared on the intellectual scene of Moscow to take the side of Khomyakov in his controversy with Herzen, Granovsky, and other young "Westernizers." Since the reactionary reign of Nicholas I was not favorable for journalistic activities, Khomyakov and Kireevsky relentlessly castigated "one-sided, superficial, analytical rationality" of the West in salons and soirées of Moscow.[4]

In his few written works, Kireevsky contrasted the basically irrational philosophy of Plato and Greek Church Fathers (notably Maximus the Confessor) with the rationalism of Aristotle and medieval Catholic Doctors of the Church. He blamed Aristotle "for molding the mind of the West in the iron cast of reasonableness," which he defined as timid prudence (as opposed to true wisdom), or the "striving for the better within the circle of the commonplace."[5] Hegel's doctrines were viewed by Kireevsky as the latest emanation of Aristotle's analytical approach, which divorced mind from soul, thoughts from (religious) feelings.

Kireevsky aspired to retrieve the lost wholeness of humanity in the irrational teachings of Eastern Orthodoxy. His devout wife introduced him to the elders (startsy) of the Optina Monastery, which he frequented in the declining years of his life. Although he did not share Yuri Samarin's radical enthusiasm for all things pre-Petrine, Kireevsky did extol the spiritual treasures of medieval Russia. According to him, the monasteries of ancient Rus' "radiated a uniform and harmonious light of faith and learning" to disparate Slavonic tribes and principalities. The net of churches and monasteries covered Russia so thickly, that these "bonds of spiritual community" unified the country into "a single living organism."[6]

Ivan Kireevsky died at 50 years old during a cholera epidemic. His brother, Pyotr, outlived him by several months. They were buried side by side in the Optina Monastery, the first laymen to be so honored.

The Slavophile movement was a loose association of primarily philosophers who rejected the rationalism, individualism, and secularism of the West.

Following Pyotr Yakovlevich Chaadayev, all the Slavophiles were philosophers of history and culture. Whereas the Western philosophers emphasized the catastrophic retardation of Russia, its social backwardness, its lack of a developed literary culture, and the consequent need for Russia to catch up with the West and to take her place in Europe, the Slavophiles emphasized and attempted to orchestrate the specific virtues and values of Russian culture.

Retrieved from https://www.newworldencyclopedia.org/p/index.php?title=Ivan_Kireevsky&oldid=680885
Categories:
Hidden category:
This page was last edited on 2 April 2008, at 10:28.
Content is available under Creative Commons Attribution/Share-Alike License; additional terms may apply. See Terms of Use for details.