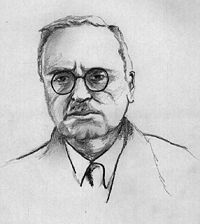 Alfred Adler (February 7, 1870 – May 28, 1937) was an Austrian medical doctor and psychologist, founder of the school of individual psychology. He examined human development in the context of the whole—how the person exists and interacts within the family, society, nation, and the world. He defined mental health as a feeling of human connectedness, and a willingness to develop oneself fully and contribute to the welfare of others. Adler's popularity can be attributed partly to his optimistic view of human nature, and partly to the fact that his theory makes sense to the general public, e.g. his ideas of "inferiority complex" and striving for perfection resonate with many people.

Born in Penzig, a suburb of Vienna, Austria in 1870 and raised in Vienna, Alfred Adler was the third child of a Jewish grain merchant and his wife. Childhood illnesses and the traumatic death of a younger sibling influenced Adler's decision to pursue a medical career. He trained as a doctor at the University of Vienna Medical School and qualified in 1895. There he met his wife Raissa Timofeyewna Epstein, an intellectual and social activist from Russia. In 1897, they were married and later parented four children, two of whom became psychiatrists.

In his early career, Adler became interested in psychology as it related to physical disorders. In 1899, he met Sigmund Freud and they formed the Vienna Psychoanalytic Society with Adler as president. This close association was short-lived as Adler became a vocal opponent to many of Freud's theories.

Adler was a frequent lecturer in Europe and the United States, communicating with his audience as easily in English as in his native German. He became a visiting professor at Columbia University in 1927. In 1932, after most of his Austrian clinics were closed due to his Jewish heritage, Adler left Austria for a professorship at the Long Island College of Medicine. His sudden death from a heart attack in 1937 during a lecture tour in Aberdeen, Scotland, was a shock to the academic community and a blow to the influence of his work. Fortunately, however, a number of his ideas were taken up by neo-Freudians.

Adler was a pioneer in creating a holistic view of human psychology. He called his approach "individual psychology," where "individual" literally means "un-divided."

Adler viewed human development within the whole social context. He defined mental health as a feeling of human connectedness, and a willingness to develop oneself fully and contribute to the welfare of others. When these qualities are underdeveloped, an individual experiences feelings of inferiority, or an attitude of superiority which may antagonize others. The perception of superiority leads to self-centered behavior and the individual may become emotionally or materially exploitative of other people. When the feelings of connectedness and the willingness to contribute are stronger, a feeling of equality emerges, and the individual will become more public-minded, self-transcending, and behave more beneficially to others.

Although Adler and Freud worked together in the Vienna Psychoanalytic Society for several years, Adler's ideas were very different, and even contradictory, to those of Freud. Adler contended with Freud's belief in the dominance of the sex instinct as the root of neurosis, and whether ego drives were libidinal; he also attacked Freud's ideas over repression. Adler believed that feelings of helplessness during childhood can lead to an inferiority complex. Many neurotic symptoms, he stated, could be traced to overcompensation for these feelings of inferiority. While Freud characterized neurosis as unavoidable, Adler perceived it as correctable. Adler asserted that the single "drive" or motivating force behind all our behavior and experience was not sex, but the striving for what he termed superiority, (which he later defined as striving for perfection). This is similar to Abraham Maslow's theory of self-actualization. It is the striving to fulfill our potential, to come closer and closer to our ideal.

In addition, Freud's theory of the ego, superego, and id tended to divide up the person into theoretical concepts. Adler, on the other hand, was influenced by the writings of Jan Smuts, the South African philosopher and statesman who felt that it was important to understand people as unified wholes in the context of their physical and social environment.

Adler found that there were two parenting styles that could cause problems in adulthood:

Adler was the first to describe the importance of birth order as a contributing factor in psychological development. However, he also speculated that birth order differences would begin to disappear when families became less competitive and autocratic, and more cooperative and democratic. A brief summary of birth order characteristics follow:

We cannot judge a human being except by using the concept of social feeling as a standard. Every individual within the body of human society must subscribe to the oneness of that society. We have to realize our duty to our fellow human beings. The degree to which social feeling has developed in any individual is the only universally valid criterion of human values.

While Adler included analysis of early childhood, he emphasized and focused on positive social interaction as part of his treatment. He believed that humans have an unconscious sense of social unity that must be nurtured to survive. His is a values-oriented psychology and he used the social feeling (originally called Gemeinschaftsgefuhl or community feeling) of connectedness as an index and goal of mental health. The opposite, a lack of social concern, was Adler's definition of mental illness. He taught that the quality of empathy needs to be supported by parents and the culture at large. In this sense, Adler was a pioneer in the field of prevention through the use of character development and education in the family, school, and community.

Adler's influence continues in several schools dedicated to carrying on his work, such as The Adler School of Professional Psychology, which was founded as The Alfred Adler Institute of Chicago by Adler's protégé, Rudolf Dreikurs, and the Alfred Adler Institutes of San Francisco and Northwestern Washington, which is dedicated to Adler's original teachings and style of psychotherapy.

The rapidly growing field of life coaching has drawn its techniques and tools primarily from the work of Alfred Adler. Techniques used include: using the Socratic method to clarify meaning and gain insight; providing support through empathy and relationship; encouragement to stimulate movement in new directions; facilitate client insight of what needs to be changed; support change by converting insights into new attitudes and behaviors; support the development of social interest, cooperation, and empathy to others; challenge client to adopt new values and lifestyle; strengthen feeling of connectedness; and promote a path of continual growth for self and others.

There are also a number of organizations promoting Adler's orientation towards mental and social wellbeing. These include the International Committee for Adlerian Summer Schools and Institutes (ICASSI) and the North American Society for Adlerian Psychology (NASAP).