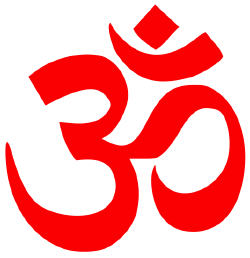 ), also rendered Om, is the most sacred sound in Hinduism, symbolizing the infinite energy of divinity. This sound is sometimes called the Udgitha or pranava mantra (primordial mantra), because it is considered to be the primordial vibration of the entire universe including ourselves. In India, the mantra 'Aum' is undoubtedly the most representative symbol of Hinduism, and its Sanskritic depiction (see image on right) is said to concisely encompass the vast storehouse of philosophy and mythology found in Hinduism. Indeed, Aum is so sacred that it is prefixed and suffixed to all Hindu mantras and incantations.

The Aum mantra first came to light in the Vedic Tradition of Hinduism, and is also considered to be holy in Buddhism, Sikhism, and some new religious movements such as Eckankar. The popularity of Aum beyond these Eastern religions seems to be fairly easily understood when we pay attention to modern physics, which has found rhythmic waves and vibrations from circular motions of particles in the world, and also when we look at more insightful aspects of the monotheistic religions where God is seen as a dynamic God of the vibration of love.

The ‘AUM’ sound is sometimes called "the 4-syllable Veda." When correctly pronounced, ‘Aum’ is said to have four sounds: “A” emerges from the throat, originating in the region of the navel, “U” rolls over the tongue, and “M” ends on the lips. The last sound is silence.

The "A" can be felt as a vibration that manifests itself near the navel or abdomen; the "U" can be felt vibrating the chest, and the "M" vibrates the cranium or the head. The “M” produces the prolonged resonance of the nasal cavity with the mouth closed and represents the final part of the cycle of existence. The abdominal vibration symbolizes creation and it is often noted that the "creative" or reproductive organs are also located in the lower abdomen. The vibration of the chest represents preservation, which is where the lungs are situated (the lungs sustain or preserve the body through breath). The vibration of the head is associated with sacrifice or destruction, since all that one gives up or destroys is first destroyed mentally. Hence, ‘Aum’ is considered to be the sum and substance of all the words that can emanate from the human throat. It is the primordial fundamental sound symbolic of the Universal Absolute." According to Hindu scripture, it is said:

Uttering the monosyllable Om, the eternal world of Brahman, One who departs leaving the body (at death), he attains the superior goal.

Indeed, the entire cycle of the universe and all it contains is said by Hindus to be symbolized in 'Aum.' Thus, 'Aum' is not simply one sound among many, according to Hinduism, but is said to be the most sacred sound that encompasses all sounds. 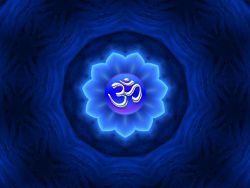 Om represented in a DIVINE and COSMIC Form.

The symbol of 'Aum / Om' contains three curves, one semicircle and a dot. Each aspect of its appearance is said to symbolize something deeper. The large lower curve symbolizes the ordinary waking state of consciousness; the upper curve denotes deep sleep (or the unconscious) state, and the lower curve (which lies between deep sleep and the waking state) signifies the dream state. The dot signifies the Absolute state of consciousness (known as Turiya), which illuminates the other three states (A - waking, U - dreaming, M - sleeping). The semicircle symbolizes Maya and separates the dot from the other three curves. The semicircle is open on the top, which means that the absolute is infinite and is not affected by maya. Maya only affects the manifested phenomenon. In this way the form of 'Aum' symbolizes the infinite Brahman and the entire universe.

In Hindu mythology, 'Aum' has another symbolic meaning: the letter ‘A’ also represents the process of creation, when it is said that all existence issued forth from Brahma's golden nucleus; the letter ‘U’ refers to Vishnu, the god who is said to preserve this world by balancing Brahma on a lotus above himself. The ‘M’ symbolizes the final part of the cycle of existence, when it is said that Vishnu falls asleep and Brahma has to breathe in so that all existing things have to disintegrate and are reduces to their essence to him. This is the ‘M’ of Mahesha, also known as the great god Shiva, whose long period of yoga begins so that the sensual world ceases to exists. Finally, the silence at the end of the mantra symbolizes the period between death and rebirth. One must not forget that this silence is an important part of the mantra. 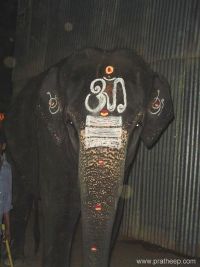 In the philosophy of Advaita Vedanta, ‘Aum’ is frequently used to represent three subsumed into one, a common theme in Hinduism. It implies that our current existence is mithya, or 'skewed reality,' that in order to know the full truth we must comprehend beyond the body and intellect and intuit the true nature of infinity, of a “Divine Ground” that is imminent but also transcends all duality, being and non-being, that cannot be described in words. Within this metaphysical paradigm, the three are represented by the lower curve, upper curve and tail subsumed into the ultimate One, indicated by the little crescent moon-shape and dot, known as chandrabindu. Essentially, upon attaining moksha, mukti, samadhi, nirvana, liberation, etc., one realizes fundamental unity; it is not the joining together of a prior manifold splitting. When one gains true knowledge, there is no split between knower and known: one becomes knowledge/consciousness itself. For many Hindus, 'Aum' is the signifier of the ultimate truth that all is one.

Popularity of Aum/ Om in Hinduism

) by far is the most popular and sacred symbol and sound in Hinduism and volumes have been written that seek to illustrate its significance. "From the beginning of creation, the three words Om Tat Sat were used to indicate the Supreme Absolute Truth. These three symbolic representations were used by brahmanas while chanting the hymns of the Vedas and during sacrifices for the satisfaction of the Supreme" (Bhagavad Gita, 17.23).

The various Upanishads also comment on the centrality of Om in Hindu thought, especially the Taittiriya, Chandogya and Mundaka Upanishads. For example, the Katha Upanishad states:

The goal, which all Vedas declare, which all austerities aim at, and which humans desire when they live a life of continence, I will tell you briefly it is Om. The syllable Om is indeed Brahman. This syllable Om is the highest. Whosoever knows this symbol obtains all that he desires. This is the best support; this is the highest support. Whosoever knows this support is adored in the world of Brahman. (I, ii, 15-17)

In the popular Bhagavad Gita Krishna says, "I am Om" (Ch. 7.8 and 9.17), and one must chant "Om" while thinking of Krishna in order to attain Him personally (Ch. 8.13). The popular prayer and chant to Shiva, "Om Namah Shiva" also utilizes the sacred sound of Om.

Hindu Gods and Goddesses are sometimes referred to as Aumkar, which means “Form of ‘Aum.’” ‘Aum’ can be seen as Sri Ganesh, whose figure is often represented in the shape of ‘Aum.’ He is thus known as Aumkar (“Shape of ‘Aum’”). Sri Nataraja, or the Hindu god 'Shiva' dancing his dance of destruction, is seen as mirroring the image of ‘Aum.’

Mantras that include the sacred sound of 'Aum / Om' are used in many different religious contexts for different purposes. Some specific examples are as follows:

Since Buddhism arose out of Hinduism, it is not surprising that the mantra 'Aum' was absorbed into the Buddhist tradition; however, Buddhists almost never transliterate it as ‘Aum,’ but use ‘Om’ instead.

There are many Buddhist mantras that incorporate the sound of ‘Om’ into their formulation. Probably the most famous of these is the six-syllabled mantra, Om Mani Padme Hum. The common translation of this mantra is, "Hail the jewel in the lotus" (‘Aum’ = Hail, ‘Mani’ = Jewel, ‘Padme’ = Lotus and Hum). However, the scholar Donald Lopez, in his book Prisoners of Shangri-La: Tibetan Buddhism and the West, challenges this conventional translation, which he claims to be an interpretation supported by neither linguistic analysis nor Tibetan tradition. He suggests that Manipadme is actually the name of a bodhisattva, a form of Avalokiteshvara who in any case has many other names, including Padmapani or “lotus flower in hand.” The Brahminical insistence on absolutely correct pronunciation of Sanskrit broke down as Buddhism was exported to other countries where the inhabitants found it difficult to reproduce the sounds. So in Tibet, for instance, where this mantra is on the lips of many Tibetans all their waking hours, the mantra is pronounced, "Om mani peme hum."

In China, the character ‘Om’ appeared as "唵" in Chinese Buddhism, and was also utilized in prayers towards Amitbha Buddha in Pure Land Buddhism, among other sects.

The concept of ‘Om’ continues to play a prominent role in Sikhism. The Sikh prayer, known as the Mool mantra, begins with the expression, Ek Onkar (meaning “God is One”). Ek Onkar is the root basis of all Sikh sacred thought, and the first phrase of the Sikh Guru embodied in scripture, the Guru Granth Sahib. The Sanskrit word omkāra (from which came Punjabi onkār; literally "OM-maker”) has a twofold meaning: 1) Brahma in his role as creator, and thus a word for "creator"; 2) writers' term for the ‘Om’ sign. Guru Nanak, the founder of the Sikh religion, placed the number "One" in front of Onkar, to propagate the basic principle of Sikhism—that the creative, sustaining and destructive energies are all embodied in the One Almighty, thereby directly opposing the Hindu Trinity (Trimurti) interpretation that had become commonplace at the time. This symbol of Ek Onkar (see insert) is commonly found in Sikh temples, known as Gurdwaras, and represents monotheism.

For Hindus, Buddhists, Sikhs and Jains, the syllable of Aum is so sacred and laden with the vibration of spiritual energy that it should only be pronounced with complete concentration and proper motivation to be efficacious. This insight by these Eastern religions seems relevant to modern physics, which understands the whole reality of the cosmos to be permeated with the vibrations of creative energy.

Aum may not seem relevant to the monotheistic religions that tend to depict God as static and immutable beyond any motion. Nevertheless, a careful study of Christianity, as well as the Sufi traditions of Islam, show that these monotheistic religions, especially when at their insightful and revelational moments, depict God as a dynamic God whose vibration is love. For example, the Christian thinkers Karl Barth and Jürgen Moltmann have attributed the motion of love in the world to the dynamic trinitarian relationship within the Godhead. (It is interesting to note that Hinduism also discusses about Aum in terms of the three forms of God: Brahma, Vishnu and Shiva.) Alfred North Whitehead suggested that the universe is a "vibratory universe," and that it is a reflection of the dynamic reciprocity of the two poles of God centering on his desire of love: conceptual and physical poles.