Working principle for a ball bearing. 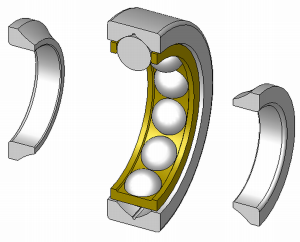 A ball bearing, an engineering term, refers to a type of rolling-element bearing that uses balls to maintain the separation between the moving parts of the bearing. The purpose of a ball bearing is to reduce rotational friction and support radial and axial loads. It achieves this by using at least two races to contain the balls and transmit the loads through the balls. Usually one of the races is held fixed. As one of the bearing races rotates it causes the balls to rotate as well. Because the balls are rolling, their coefficient of friction is much lower than that of two flat surfaces rotating against each other.

Ball bearings tend to have lower load capacity for their size than other kinds of rolling-element bearings due to the smaller contact area between the balls and races. However, they can tolerate some misalignment of the inner and outer races. Compared to other bearing types, the ball bearing is the least expensive, primarily because of the low cost of producing the balls used in the bearing.

Ball bearings are currently used in numerous applications that are important in everyday life. Examples include the moving parts of bicycles, automobiles, turbines, jet engines, and dental equipment.

Ball bearings were found on the Roman Nemi ships constructed in about 40 C.E.[1]

The modern ball bearing design appears to have originated in the late eighteenth century.[2] Philip Vaughan, a Welsh inventor and ironmaster, patented the first design for ball bearings in Carmarthen in 1794.[3] Designed to support a carriage axle, the ball bearings ran along a track (or ball race) in an axle assembly.

Later, in August 1869, Parisian bicycle mechanic Jules Suriray received the first French patent for ball bearings.[4] The bearings were then fitted to the winning bicycle ridden by James Moore in the world's first bicycle road race, Paris-Rouen, in November 1869.[5]

The modern, self-aligning design of the ball bearing is attributed to Sven Wingquist of the SKF ball-bearing manufacturer in 1907.

There are several common designs of ball bearings, each offering various tradeoffs. They can be made from many different materials, including stainless steel, chrome steel, and ceramic. A hybrid ball bearing is a bearing with ceramic balls and races of metal.

An angular contact ball bearing uses axially asymmetric races. An axial load passes in a straight line through the bearing, whereas a radial load takes an oblique path that tends to want to separate the races axially. So the angle of contact on the inner race is the same as that on the outer race. Angular contact bearings better support "combined loads" (loading in both the radial and axial directions) and the contact angle of the bearing should be matched to the relative proportions of each. The larger the contact angle (typically in the range of ten to 45 degrees), the higher the axial load supported, but the lower the radial load.

In high-speed applications, such as turbines, jet engines, and dentistry equipment, the centrifugal forces generated by the balls will change the contact angle at the inner and outer races. Ceramics such as silicon nitride are now regularly used in such applications due to its low density (40 percent of steel, and thus significantly lower centrifugal force), its ability to function in high temperature environments, and the fact that it tends to wear in a way similar to bearing steel (rather than cracking or shattering like glass or porcelain).

Most bicycles use angular-contact bearings in the headsets because the forces on these bearings are in both the radial and axial directions.

An axial ball bearing uses side-by-side races. An axial load is transmitted directly through the bearing, while a radial load is poorly supported, tends to separate the races, and anything other than a small radial load is likely to damage the bearing.

A Conrad bearing is assembled by placing the inner and outer races radially offset, so the races touch at one point and have a large gap on the radially opposite side. The bearing is then filled by placing balls into the large gap, then distributing them around the bearing assembly. The act of distributing the balls causes the inner and outer races to become concentric. If the balls were left free, the balls could resume their offset locations and the bearing could disassemble itself. For this reason, a cage is inserted to hold the balls in their distributed positions. The cage supports no bearing load; it serves to keep the balls located. Conrad bearings have the advantage that they take both radial and axial loads, but their disadvantage is that they cannot be filled to a full complement and thus have reduced load-carrying capacity compared to a full-complement bearing. The Conrad bearing is named for its inventor, Robert Conrad, who got British patent 12,206 in 1903 and U.S. patent 822,723 in 1906. Probably the most familiar industrial ball bearing is the deep-groove Conrad style. The bearing is used in most of the mechanical industries.

A slot-fill radial bearing is one in which the inner and outer races are notched so that when they are aligned, balls can be slipped in the slot in order to fill the bearing. A slot-fill bearing has the advantage that the entire groove is filled with balls, called a full complement. A slot-fill bearing has the disadvantages that it handles axial loads poorly, and the notches weaken the races. Note that an angular contact bearing can be disassembled axially and so can easily be filled with a full complement.

The outer race may be split axially or radially, or a hole drilled in it for filling. These approaches allow a full complement to be used, but also limit the orientation of loads or the amount of misalignment the bearing can tolerate. Thus, these designs find much less use.

Caged bearings typically have fewer balls than a full complement, and thus have reduced load capacity. However, cages keep balls from scuffing directly against each other and so can reduce the drag of a loaded bearing. Caged roller bearings were invented by John Harrison in the mid-1700s as part of his work on chronographs.[6] Caged bearings were used more frequently during wartime steel shortages for bicycle wheel bearings married to replaceable cups.

Ceramic bearing balls weigh up to 40 percent less than steel bearing balls, depending on size. This reduces centrifugal loading and skidding, so hybrid ceramic bearings can operate 20 to 40 percent faster than conventional bearings. This means that the outer race groove exerts less force inward against the ball as the bearing spins. This reduction in force reduces the friction and rolling resistance. The lighter ball allows the bearing to spin faster, and uses less energy to maintain its speed.

Ceramic hybrid ball bearings use these ceramic balls in place of steel balls. They are constructed with steel inner and outer rings, but ceramic balls; hence the hybrid designation.

Self-aligning ball bearings are constructed with the inner ring and ball assembly contained within an outer ring that has a spherical raceway. This construction allows the bearing to tolerate a small angular misalignment resulting from deflection or improper mounting.

Today, ball bearings are used in numerous applications that are important in everyday life. For example, they are found in the moving parts of bicycles, automobiles, turbines, and jet engines.

One interesting application for ball bearings has been implemented at the San Francisco International Airport. In the airport there are 267 columns which are used to bear the weight of the airport. Each column is placed on a steel ball bearing with a diameter of five feet. The ball sits in a concave foundation. If an earthquake occurs, the ground can move up to 20 inches in any direction, as the columns roll on their bases. This is an effective way to separate the building from the movement of the ground. After the earthquake has ended, the columns are re-centered on their bases by the force of gravity.[7]

The bearings used for computer hard drives were used to be highly spherical and said to be the best spherical shapes manufactured. However, such bearings are being increasingly replaced with fluid bearings.

During World War II, German ball bearing factories were often a target of allied aerial bombings; such was the importance of the ball bearing to the German war industry.[9]