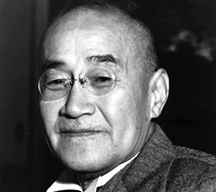 Yoshida Shigeru (吉田 茂, Yoshida Shigeru), September 22, 1878 - October 20, 1967, was a Japanese diplomat and politician who served as Prime Minister of Japan from 1946 to 1947 and from 1948 to 1954, during the critical transition period after World War II. He served as the Japanese ambassador to Italy (1930–32) and to Great Britain (1936–39). During World War II, he worked to initiate negotiations for peace early on. Late in 1944 he was imprisoned for championing peace, but after the surrender in 1945 he returned to the government and became the head of the Liberal party.

Yoshida was elected prime minister five times between 1946 and 1954. During his administration a new constitution was promulgated, land reforms instituted, the U.S. occupation ended, and Japan’s economic transformation began. He was finally ousted in December of 1954, because of unresolved problems of trade with mainland China, rearmament, the alliance with the United States, and economic rehabilitation.

Yoshida’s emphasis on Japan's economic recovery and a reliance on US military protection at the expense of independence in foreign affairs became known as the "Yoshida Doctrine," and shaped Japanese foreign policy during the Cold War era and afterwards.

Takeuchi (Yoshida) Shigeru was born September 22, 1878, in Tokyo, Japan, the fifth child of Takeuchi Tuna, a politician of the Freedom and People's Rights Movement (自由民権運動) based in Tosa (present Kochi prefecture). In 1881, Shigeru was adopted by Yoshida Kenzo, a wealthy business man who had studied in England. In July 1906, Yoshida Shigeru graduated from Tokyo Imperial University, and in September, just after Japan's victory against Russia in the Russo-Japanese War (1904-1905), he entered the Japanese diplomatic corps. From 1906 to 1907 Yoshida worked as a consular official in China.

In 1909, at age 30, Yoshida married Yukiko, the daughter of Count Makino Nobuaki (牧野伸顕), a Japanese statesman and the second son of Okubo Toshimichi, one of the three great nobles who led the Meiji Restoration. Makino had served as Japan's ambassador plenipotentiary to the Paris Peace Conference of 1919, ending World War I. He became Imperial Household Minister and was elevated in 1921 to the rank of danshaku (baron) under the kazoku peerage system. He worked behind the scenes to improve Anglo-Japanese and Japanese-American relations, and shared Saionji Kinmochi's efforts to shield the Emperor from direct involvement in political affairs.

During the 1930’s Yoshida was Japan's ambassador to Italy and the United Kingdom and retired from his last appointment as ambassador to London in 1938.

As a vice-minister in the Ministry of Foreign Affairs, Yoshida Shigeru was characterized, not as belonging to the group that wanted to cooperate with England and the United States, but as part of a group that sought cooperation with other Asian nations. However, because Yoshida Shigeru was on good terms with Arthur Neville Chamberlain, Conservative British politician and Prime Minister of the United Kingdom, his political theory included taking precautions against Nazi Germany, and his father-in-law was Count Makino Nobuaki, the Axis powers regarded Yoshida Shigeru as a partial to England and the United States.”

From February 26 – 29, 1936, the radical ultranationalist Kodaha faction of the Imperial Japanese Army attempted a coup d'état, known as The February 26 Incident (二・二六事件). Several leading politicians were killed, and the residences of former Keeper of the Privy Seal Makino Nobuaki and politician Saionji Kimmochi were attacked (both men managed to flee). The center of Tokyo was briefly held by the insurgents before the coup was suppressed. After this incident, during the formation of the Hirota cabinet, Yoshida Shigeru was put forward as a candidate for foreign minister, but the army opposed his nominaton.

While Yoshida was ambassador to the England in 1936, a pact supplementing the previous German-Japanese Agreement (later joined by Italy) was signed, along with the Anti-Comintern Pact. Yoshida, who vehemently opposed this agreement, was removed from his position as ambassador. In 1939, Yoshida became an ambassador extraordinary and withdrew from the front ranks of the foreign diplomacy.

As soon as Yoshida returned from England, he wrote a letter calling for the resignation of the entire Cabinet lead by Konoe Fumimaro, who was taking a hard-line policy toward the United States. After the new Cabinet, lead by Tojyo Hideki, was installed, Yoshida Shigeru proposed a peace plan and asked by the letter for the resignation of the entire Cabinet. Tojyo rejected Yoshida’s demands, and later Japan rushed into the war.

During World War II, Yoshida, as an intermediary between the chief followers of Count Makino Nobuaki and the former Prime Minister Konoe Fumimaro, was occupied in negotiating a movement toward peace. Yoshida was tried in vain to end the war during its early stages. For example, after the Japanese navy was severely defeated at the Battle of Midway, Yoshida conceived a plan to go to Switzerland with the former Prime Minister Konoe Fumimaro and negociate a peace treaty; this attempt was crushed by Kido Koichi, a major supporter of the Tojo Cabinet. In January, 1945, Yoshida was arrested by the military police and imprisoned for 40 days. Yoshida Shigeru signed the Constitution of Japan as Prime Minister.

After World War II, Yoshida became one of Japan's key postwar leaders. On October 17, 1945, Yoshida was appointed as the Minister for Foreign Affairs by the Higashikuninomiya and Shidehara Cabinets. In December, he was appointed as a member of the House of Peers and became the President of the Liberal Democratic Party.

Yoshida formed a cabinet and became the forty–fifth prime minister on May 22, 1946. In the eyes of the Post-WWII Allied Occupation, his pro-United States and pro-British ideals and his knowledge of Western culture, gained through education and his diplomatic career abroad, made him the perfect candidate. After being replaced by Katayama Tetsu on May 24, 1947, Yoshida returned to the post as the forty-eighth prime minister on October 15, 1948.

Yoshida had built a strong personal following which enabled him to govern almost as an autocrat, giving Japan political stability during its recovery after the war. In 1951, he negotiated the peace treaty that officially ended World War II, securing for Japan the military protection of the United States. Yoshida was retained in three succeeding elections (forty–ninth: February 16, 1949; fiftieth: October 30,1952; and fifty–first: May 21, 1953). He appointed or reshuffled more than 104 Cabinet ministers during his career, to prevent any one gaining enough power to unseat him.

Yoshida Shigeru’s endurance and persistence more than compensated for his small stature (5 ft. 1 in.). He was said to irritate and annoy Japanese politicians with his irreverence, urbanity and sly comments. Yoshida described his first meeting with the US General MacArthur to his daughter, saying that MacArthur paced theatrically back and forth while delivering one of his sermons. Yoshida imagined himself in a cage with a pacing lion, and laughed. MacArthur asked why he was laughing, and after Yoshida explained, glared for a moment before laughing with his guest. MacArthur and Yoshida went on to form a warm friendship and worked together on many initiatives.

In 1954, while he was traveling abroad, two prominent conservatives, Hatoyama Ichiro and Shigemitsu Mamoru, withdrew their support from Yoshida and formed a large, new "Japan Democratic Party" which held the majority vote. Yoshida was ousted on December 10, 1954, and replaced by Hatoyama Ichirō. He retired from the Diet of Japan in 1955. Yoshida died October 20, 1967.

Under Yoshida's guidance, Japan began to rebuild its lost industrial infrastructure, placing a premium on unrestrained economic growth. Yoshida’s emphasis on Japan's economic recovery, and reliance on US military protection at the expense of independence in foreign affairs, became known as the "Yoshida Doctrine" and shaped Japanese foreign policy during the Cold War era and afterwards. Japan adopted the US stance on international politics and security. Yoshida’s policies resulted in spectacular economic growth for Japan but led to a new series of problems during the 1990s, including international hostility over trade imbalances and Japanese protectionism and unfair trade practices. The Japanese government has also been increasingly pressured to participate in international military activities, while the Japanese people continue to mistrust the military and hold a pacifist stance. Since the 1970s, after rise of the environmental movement, the bursting of Japan's economic bubble, and the end of the Cold War, Japan has been struggling to redefine its national goals.

Retrieved from https://www.newworldencyclopedia.org/p/index.php?title=Yoshida_Shigeru&oldid=688275
Categories:
Hidden category:
This page was last edited on 4 April 2008, at 02:39.
Content is available under Creative Commons Attribution/Share-Alike License; additional terms may apply. See Terms of Use for details.