Walter Crawford Kelly, Jr (August 25, 1913–October 18, 1973), known as Walt Kelly, was a cartoonist notable for his comic strip Pogo featuring characters that inhabited a portion of the Okefenokee Swamp in Georgia. The strip was famous for its sophisticated humor and keen political satire. Kelly was trained as an animator at Walt Disney Studios (he worked on cartoon shorts and Pinocchio, Fantasia, and Dumbo), he left the studio during a labor dispute in 1941. His irreverent and topical portrayal of the changing American and global political scene through his comic strip Pogo brought humor to his readers and poignancy to the moment.

Kelly was born in Philadelphia, Pennsylvania. While he was still a child, his family moved to Bridgeport, Connecticut where his father worked in a munitions plant. After graduating from Warren Harding High School in 1930, Kelly worked a few odd jobs until landing a position as a crime reporter on the Bridgeport Post. There he took up cartooning and illustrated a biography of Bridgeport native P. T. Barnum. He found a job at Walt Disney Productions in California as an animator on Donald Duck cartoons. Kelly worked 1935 to 1941 for Disney, contributing to films including Snow White and the Seven Dwarfs, Fantasia, and Dumbo. During 1935 and 1936, his work also appeared in early comic books for what later became DC Comics. Kelly was one of many Disney animators, including Art Babbitt, Bill Tytla, and John Hubley, who picketed Disney during the 1941 Disney animators' strike, after which he left the studio.

Kelly began a series of comic books based on fairy tales and nursery rhymes along with annuals celebrating Christmas and Easter for Dell Comics. He also produced a series of stories based on the Our Gang film series, provided covers for Walt Disney's Comics and Stories and illustrated adaptations of Snow White, Pinocchio, and The Three Caballeros. This period saw the creation of Kelly's most famous character, Pogo, who first saw print in 1943 in Dell's Animal Comics. His health would not allow him to work as a service man, so during World War II, Kelly worked in the Army's Foreign Language Unit illustrating manuals. He returned to journalism as a political cartoonist after the war. In 1948, while art director of the short-lived New York Star, Kelly began to produce a pen-and-ink strip of current-events commentary populated by characters from Okefenokee Swamp. The first Pogo strip appeared on October 4, 1948. After the New York Star folded on Jan. 28, 1949 Kelly arranged for syndication through the Hall Syndicate which re-launched the strip in May of 1949. Kelly eventually arranged to acquire the copyright and ownership of the strip, uncommon in that era. 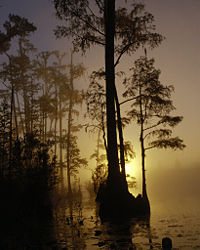 Pogo was a landmark strip in many ways and Kelly is arguably one of the greatest and most influential of cartoonists in the history of the craft. Kelly combined masterful line and brush-work (learned at the "mouse factory," Disney) with fluent and highly amusing story-telling acted out by an endearing cast of "nature's screechers." He borrowed from various dialectical sources and his own fertile imagination to invent a unique and charming backwoods-patois, heavy on the nonsense, to fit his cartoon swampland. Although Pogo stands on its own as a superbly-realized cartoon strip for the ages, it was perhaps Kelly's interjection of political and social satire into the work that was its greatest pioneering accomplishment- such commentary was simply not done in the genre of dailies in Kelly's time.

The principal characters were Pogo the Possum; Albert the Alligator; Churchy LaFemme (cf Cherchez la femme), a turtle; Howland Owl; Beauregard (Houndog); Porkypine, and Miss Mamzelle Hepzibah, a French skunk. Kelly used the strip in part as a vehicle for his liberal and humanistic political and social views and satirized, among other things, Senator Joseph McCarthy's anti-Communist demagogy (in the form of a shotgun-wielding bobcat named "Simple J. Malarkey") and the sectarian and dogmatic behavior of Communists.

In 1969, a half-hour animated television special, The Pogo Special Birthday Special was produced, and aired on the NBC television network. Kelly himself provided the voices for P.T. Bridgeport, Albert Alligator, and Howland Owl.

In 1952 and later, a "Pogo for President" campaign, with followers wearing "I Go Pogo" buttons, became an expression of political protest. "Pogo" was also distinguished by exceptional linguistic inventiveness and playfulness, as expressed, for example, in the Pogo version of songs such as "Deck Us All with Boston Charlie" (for "Deck the Halls with Boughs of Holly") and "Ma Bonny lice soda devotion" (for "My Bonnie lies over the ocean").

Perhaps the most famous quotation to come from this series is, "We have met the enemy and he is us" (a paraphrase of Commodore Perry's famous "We have met the enemy and he is ours" from the War of 1812). The earliest form of this expression appeared in his introduction to The Pogo Papers (1953); it was used much later in the comic strip and as the title of a collection of strips. This is typical of the wry and politically astute commentary to be found in the daily and Sunday strip. It was distributed by King Features Syndicate to hundreds of newspapers for many years. The individual strips were collected into at least twenty books edited by Kelly, reprinted editions of some of these remain available today. He received the Reuben Award for the series in 1951.

Having previously lampooned McCarthy, Kelly was also censored by some papers in the 1960s for portraying Soviet leader Nikita Khrushchev as a pig and Fidel Castro as a cigar-smoking goat spouting pseudo-Marxism like "The shortage will be divided amongst the peasants!"[1] However Kelly was speaking partly from experience, having spent time in Cold War Berlin, writing as a newspaper correspondent.[2]

During the 1968 political campaign, Kelly's strip depicted rival Presidential candidates Hubert Humphrey and Richard Nixon as the Tweedle twins (Tweedledum and Tweedledee) but never established which was which: each twin claimed to be "Dee" while identifying the other as "Dum." In later years, Kelly's strip featured caricatures of Nixon depicted as a spider, J. Edgar Hoover as a bulldog, Spiro Agnew as a hyena and George C. Wallace as a bantam cock. Throughout the run of Pogo, the strip's characters frequently traversed the Okeefenokee Swamp aboard a flimsy flat-bottomed boat. Kelly developed the pleasant gimmick of lettering the boat's name on its hull—the gimmick being that the name changed from one day to the next, and even from panel to panel within the same day's strip, but was always a tribute to some obscure real-life person whom Kelly wished to salute in print.

In contrast to the rigidly straight-edged panels of most other comic strips, the panels of Pogo were always defiantly hand-drawn with no attempt at straightness. Frequently, a Pogo character would lean against the edge of the panel, or Albert would strike a match (to light his cigar) against the nearest panel edge, invariably distorting the panel even further.

Walt Kelly illustrated The Glob, a children's book about the evolution of man written by John O'Reilly and published in 1952. The characters and creatures in the book have a distinctly Pogoian character.

On his passing in 1973 in Woodland Hills, California, Walt Kelly was interred in the Cemetery of the Evergreens in Brooklyn, New York.

In 1980, a clay animation feature film, Pogo For President (aka I Go Pogo) was released, but failed to gain much media attention.

Fantagraphics Books in 2006 published the first volume of a series collecting Kelly's Our Gang stories.

Retrieved from https://www.newworldencyclopedia.org/p/index.php?title=Walt_Kelly&oldid=1037006
Categories:
Hidden category:
This page was last edited on 10 May 2020, at 21:22.
Content is available under Creative Commons Attribution/Share-Alike License; additional terms may apply. See Terms of Use for details.